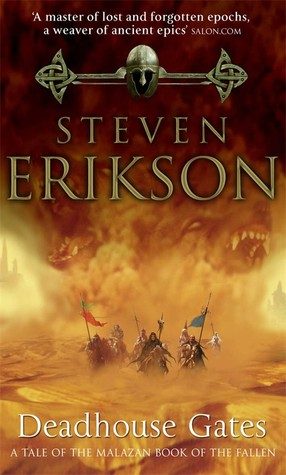 Set on the fictional continent of Seven Cities, Deadhouse Gates – the second novel in Steven Erikson’s epic fantasy series The Malazan Book of the Fallen – introduces a plethora of new characters to join those returning from the events of book one. Everything taking place in Deadhouse Gates is influenced by the continent-wide rebellion that was heavily foreshadowed in Gardens of the Moon, and conflict and bloodshed feature on a thus far unprecedented scale.

Concentrated as it is on just a handful of major characters, the plot of Deadhouse Gates is much more tightly woven and focused than that of Gardens of the Moon; yet it’s also far more ambitious. Each storyline is worthy of its own novel, yet Erikson chooses instead to artfully weave them together, creating a cohesive pattern of events that lead gradually but inevitably towards a catastrophic conclusion. The grand scale of the main plotline –

the ‘Chain of Dogs’ – is the first true example of what Erikson is capable of, and the incredible storytelling is just a hint of what the rest of the series has in store.

Deadhouse Gates gives us our first real look at Seven Cities: a culturally diverse desert continent made up largely of warring tribes and religious cities; a continent in the midst of a violent rebellion against the control of the Malazan Empire. Led by a Seeress known as Sha’ik, this rebellion – the Whirlwind Apocalypse – threatens to return the land to its pre-Imperial state of ignorance and tradition, blood feuds and senseless violence, with the soldiers of the Apocalypse having driven their Malazan conquerors out of all but one of the Holy Cities. The Malazans’ panicked flight is the story that lies at the heart of Deadhouse Gates.

The Chain of Dogs, a.k.a. fifty thousand Malazan refugees, escorted across a hostile desert continent by what remains of the Malazan Seventh army and its commander, Coltaine. The Chain of Dogs, stumbling just ahead of a renegade army that vastly outnumbers them all. We witness their plight through the eyes of Duiker, who, as Imperial Historian, is obliged to record every detail of this fraught and seemingly impossible journey.

And what a journey! Not just for the characters, but for us as readers. For the first time in the series – but certainly not the last – Erikson throws us into an emotional blender, and then spends the better part of a thousand pages gradually cranking the setting higher and higher before finally letting us crawl our way back out again, shredded and shaken. As the characters experience shock, fear, determination, fury, pathos, hope, despair, and finally wordless outrage, so do we. I spent most of the last 150 pages of Deadhouse Gates on the brink of tears, partly because I knew what was coming and partly because Erikson has the rare and incredible talent of being able to stir his readers’ emotions with his words, even on a third re-read of the book.

Of course, the other storylines are also brilliant and worthy of mention. And though I don’t think anyone will deny that Coltaine’s Chain of Dogs takes centre stage, let’s not forget the tale of Felisin, yanked from the comforts of her rich lifestyle during the Cull of the Nobility and forced to extreme measures to survive the slave pits with the help of two unlikely companions; and Fiddler, former soldier of the Bridgeburners, seeking an ancient legend in the holy desert of Raraku and completely out of his depth. Then there’s Mappo, a Trell warrior endlessly trapped between his loyalty to a sacred vow and his friendship with the man whom he is sworn to destroy; and the assassin Kalam, returned to his home continent and bent on pursuing vengeance against the Empress who wronged him.

Furthermore, Erikson continues to reveal a limitless capacity for creating unique and memorable characters such as the devious High Priest of Shadow, Iskaral Pust. But no matter how minor the plot thread, each and every one is skilfully interwoven and sets the stage for the rest of the series.

Gardens of the Moon is brilliant, true. But Deadhouse Gates is simply astounding in its storytelling, and left me a gibbering, goosebump-laden wreck – even though I’d already read the thing three times before. I seriously envy those reading it for the first time, and can’t wait to get re-acquainted with the rest of this incredible series, myself.

In the Holy Desert Raraku, the seer Sha’ik and her followers prepare for the long-prophesied uprising named the Whirlwind. Enslaved in the Otataral mines, Felisin, youngest scion of the disgraced House of Paran, dreams of freedom and vows revenge, while the outlawed Bridgeburners Fiddler and Kalam conspire to rid the world of Empress Laseen (although it seems the gods would, as always, have it otherwise). And as two ancient warriors – bearers of a devastating secret – enter this blighted land, so an untried commander of the Malaz 7th Army leads his war-weary troops in a last, valiant running battle to save the lives of thirty thousand refugees.