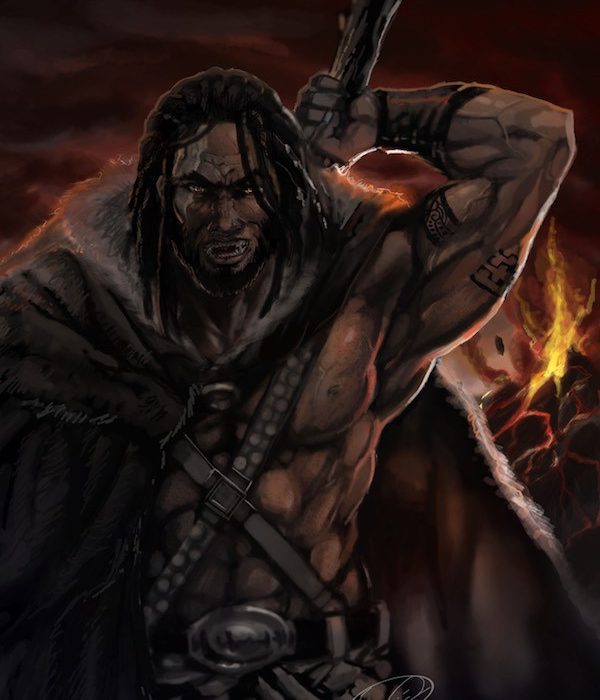 A Beginner’s Guide to Malazan Characters: ‘Gardens of the Moon’

This article originally appeared on Tor.com on September 19th 2016 and features original artwork by Chisomo Phiri.

I’ll be honest: I fell flat on my face the first time I tried to read Gardens of the Moon. Gods, assassins, soldiers, mages, immortals – you name it, Erikson’s debut is rife with it. The sheer amount of new characters leaves many readers thumbing through the earlier chapters again and again, muttering all the while about maybe having missed something.

But fear not, new readers! Your friendly Malazan holiday rep is here to save you from this fate. Just sit back, relax and enjoy this handy guide to Erikson’s inimitable characters and the tangled web of factions that connects them.

The Malazan Empire assimilates each culture it conquers. Most of the books tend to concentrate mainly on its military – but before we begin, here’s a brief overview of those at the very top of the food chain.

Formerly known as Surly. Once a bog-standard barmaid . . . until the night she assassinated the previous Emperor, Kellanved, along with others belonging to the Emperor’s ‘Old Guard’—including his chief adviser, Dancer.

Unhealthily obsessed with the colour green. Commands a faction of elite assassins known as the Claw who, loyal to Empress Laseen, played an important role in her bloody coup.

If the Clawmaster is Laseen’s hidden left hand, the Adjunct is undoubtedly his counterpart. Adjunct Lorn is the public face, voice, and sword arm of the Empress, and is fiercely loyal to Laseen (like, Brienne of Tarth-scale loyalty). Lorn wears the Adjunct’s traditional rust-coloured, magic-deadening sword, so there’s no danger of not being recognised (and feared) wherever she goes. But beneath the chip on her shoulder and the trappings of authority, she’s just a woman doing her job.

So that’s the capital. But Gardens of the Moon takes place in the field, so here’s a quick rundown of the imperial army’s key players:

The Malazan army is a motley conglomeration of races, cultures, genders and skillsets. From crossbow-wielding marines and heavyweight frontline fighters to ex-assassins and necromancers, its soldiers are both the heart and the backbone of this series.

Commander (‘High Fist’) of the Malazan campaign on Genabackis (aka. the continent where GotM takes place). Has one arm.

Soldier, optimist and son of . . . Toc the Elder! (Bet you didn’t see that one coming.) Desperately needs someone to buy him a t-shirt that reads ‘Wrong place, wrong time.’ Has one eye.

Big heart, big magic, big body. Not so much a cougar as a cradle-snatcher…but we all have our flaws.

Remember the “Old Guard” I mentioned above? The ones Empress Laseen is no longer a fan of? Well, most of these guys—now fighting in Onearm’s Host—were as good as part of it. We first meet the Bridgeburners in the aftermath of a sorcery enfilade outside the city of Pale, during which most of their company were “accidentally” decimated by their own side.

Wet-behind-the-ears nobleborn with a habit of inadvertently paving the road to hell. Reluctant buddy of Adjunct Lorn. Recently handed a commission as Captain of the Bridgeburners. Veterans one and all, the Bridgeburners don’t take kindly to highborn officers: Paran is the latest in a long line of Captains, and the grunts are busy planning his “welcome” before he’s even arrived. Poor guy.

Whiskeyjack is The Man: a tough-but-fair, salt-of-the-earth-type soldier. The most well-known Bridgeburner Sergeant, Whiskeyjack also happens to be Dujek Onearm’s BFF and leads his own eclectic squad of Bridgeburner soldiers. Including . . .

MMGA (Makes Mages Great Again). Seriously, even if you despise mages you’ll hit it off with Quick Ben: he’s smart-mouthed, highly strung, and perhaps one of the cleverest characters in the whole damn series. Goes to extreme lengths to lurk beneath the high-command radar and appear less powerful than he really is. Certified badass.

Also a certified badass. Huge and muscled, ex-Claw Kalam seems an unlikely assassin, though it’s true he can probably crush your skull with his bare hands. But he’s light on his feet and quick with his knives . . . and always has Quick Ben watching his back.

Sapper. Loves playing with munitions more than he loves life itself. Slightly deranged. Invents card games using the Deck of Dragons (aka Tarot cards that most people are afraid to even share a room with).

You’ll come across a nameless dark-haired fishergirl in one of the earliest chapters. Keep your eye on her, because it isn’t long before she reappears as a creepy-ass recruit named Sorry. There’s something odd about her, alright…and her presence makes even her grizzled tough-as-old-boots squadmates nervous.

As of the opening of GotM, the city of Pale has fallen to the Malazans. This leaves Darujhistan as the last remaining free city on Genabackis . . . and the location of the story’s big climax.

Darujhistan’s social and political factions are many and varied, but can be loosely divided into four influential groups:

Nasty bastards. Ostensibly the rulers of Darujhistan, their political strategies consist mainly of bitching, backstabbing, and brown-nosing. Of all the fancy-arsed nobles’ names flung around here the only ones you need to pay attention to are Turban Orr, Lady Simtal and the D’Arle family (and of course, Challice. Who the f*ck is Challice?!)

Magic bastards. The real power within the city, these shadowy figures are more interested in peace than politics. Led by High Alchemist Baruk, their ranks also include an absent-minded old scholar…and his familiar, a flying monkey known as Moby.

THE GUILD OF ASSASSINS

A small but passionate community of banjo-playing dwarves.

A shifty bunch of thieves, cutthroats, beggars, scroungers and miscreants. Naturally, these are the guys we spend most of our time in Darujhistan with, so here’s a quick overview of some of the standouts:

Beneficent Kruppe refers to himself in the third person. But Kruppe’s new (and cheerfully unaware) friends should not let Kruppe’s cherubic appearance and rambling demeanour deceive them: oh, no! For affable Kruppe is a master of sleight of hand; and Kruppe assures dear readers that he is, indeed, far more cunning than they might think.

Thief, but by choice rather than necessity. Astoundingly naïve. (Like, seriously. The dude is oblivious. Adorable, yes. But also facepalm-provokingly oblivious. Consider yourselves warned!)

Assassin. Member of the Guild of Assassins. Hates it when other assassins rely on magic instead of assassin-y skills. Enjoys assassinations and long walks up haunted towers (to lie in wait before assassinating someone).

Fop. Dandy. Handsome layabout who offers his “services” as an escort to rich women. Also in cahoots with Assassin-y McAssassinface Rallick Nom in a super-secret plan involving their drunken mate, Coll.

Oh, and lastly: be sure to keep an eye out for the mysterious “Eel”. Slippery fellow, that one.

So there you have the Daru. But what about their allies? And what if the Malazans aren’t their only enemies?

Finally, let’s meet a few of the free agents. These fantastical figures are some of the most powerful – and unpredictable! – players in Erikson’s long game.

Rake is literally the Son of Darkness. As in, his mum is Mother Dark. This makes him sort of a cross between Ozzy Osbourne and Jesus: ageless, intelligent, and powerful beyond all measure, Rake is the brooding-but-badass leader of the Tiste Andii race.

FYI: You know how the elves in Lord of the Rings are tall and majestic and distant and cold and also just a little bit depressing? Picture them with midnight skin and moon-white hair. Now imagine that some of them are also capable of shapeshifting into dragons, while others wield primeval magic and weapons with impossible skill. And then – just for kicks – place them all on a colossal flying mountain and name it “Moon’s Spawn”.

Are you picturing it? Good. That’s the Tiste Andii.

A.k.a. the big bastard with the hammer. (No, not Thor. Different dude; different hammer.)

Caladan Brood doesn’t get all that much page time. Nonetheless, he’s a huge presence throughout the…which, let’s face it, isn’t all that surprising when you take into account the fact that he’s a not-quite-human warlord carrying the only weapon capable of waking the Sleeping Goddess, Burn. Did I mention he’s been carrying that bad boy around for more than a thousand years?

FYI: Before the events of GotM, Brood and his BFF Rake started a kind of heavy-metal supergroup: Brood’s tribal armies and Rake’s Tiste Andii got together and swore to defend the Free Cities (like Pale and Darujhistan) against the Malazan Empire. They also recruited the legendary Crimson Guard mercenaries, along with other slightly more unsavoury allies. Such as . . .

The third wheel in the Brood/Rake (Brake?) bromance. This grouchy old git is the naysayer of the group…and yet strangely impressive. Ancient, bitter and universally hated, yes. But Kallor is also no slouch with the enormous sword he carries, and despite his age he’s more cunning than a fox who’s just been appointed Professor of Cunning at Oxford. Too bad allies and foes alike mock his self-styled title; and too bad that, despite lugging his decrepit throne along with him everywhere he goes, in actuality he is—in the words of renowned bard H’etfield James– “King Nothing.”

Speaking of lost glory and immortality . . .

The first T’lan Imass (undead cavemen tenuously allied with the Malazans) we meet, Onos T’oolan is without doubt the most skilled swordsman among the thousands-strong ranks of walking dead. Don’t get the wrong impression, though, because shambling zombies the Imass ain’t.

Fun fact: a friend of mine once told me he imagines the T’lan Imass to look like Iron Maiden’s skeletal mascot, Eddie. To this day I can’t decide if that makes them more or less terrifying. Either way, Tool is metal AF.

It’s all about the little guys

I could happily ramble on forever about ALL THE CHARACTERS in Gardens of the Moon, as well as the factions they represent and the profound motifs they introduce—epic motifs like power attracts power; war destroys the things you love; progress vs stagnation; and mega-shark vs giant octopus…

For now, though, I hope I’ve managed to give new readers a glimpse of what (for me) makes this book so special. Erikson’s tale is essentially about the nature of humanity, and he adopts a more intimate approach to character-building than any other epic fantasy author I’ve encountered. He delights in showing us that the gods are fallible just as much as he revels in portraying the quiet heroism of lowly soldiers. He creates characters who are physically alien or barbaric, but in whom we can nonetheless recognise something of ourselves; and he puts each and every one of his little guys through the wringer. Not because he’s cruel—though some would say that’s a matter for debate!—but because he knows full well that the surest way to evoke a visceral response from readers is to simply give us characters that we care about and relate to.

Credit for all artwork featured in this article goes to digital artist Chisomo Phiri. Check out his full portfolio on DeviantArt!

This article appeared in its original form on Tor.com. You can read it here. Or, for more Malazan goodness, check out some of my reviews here!