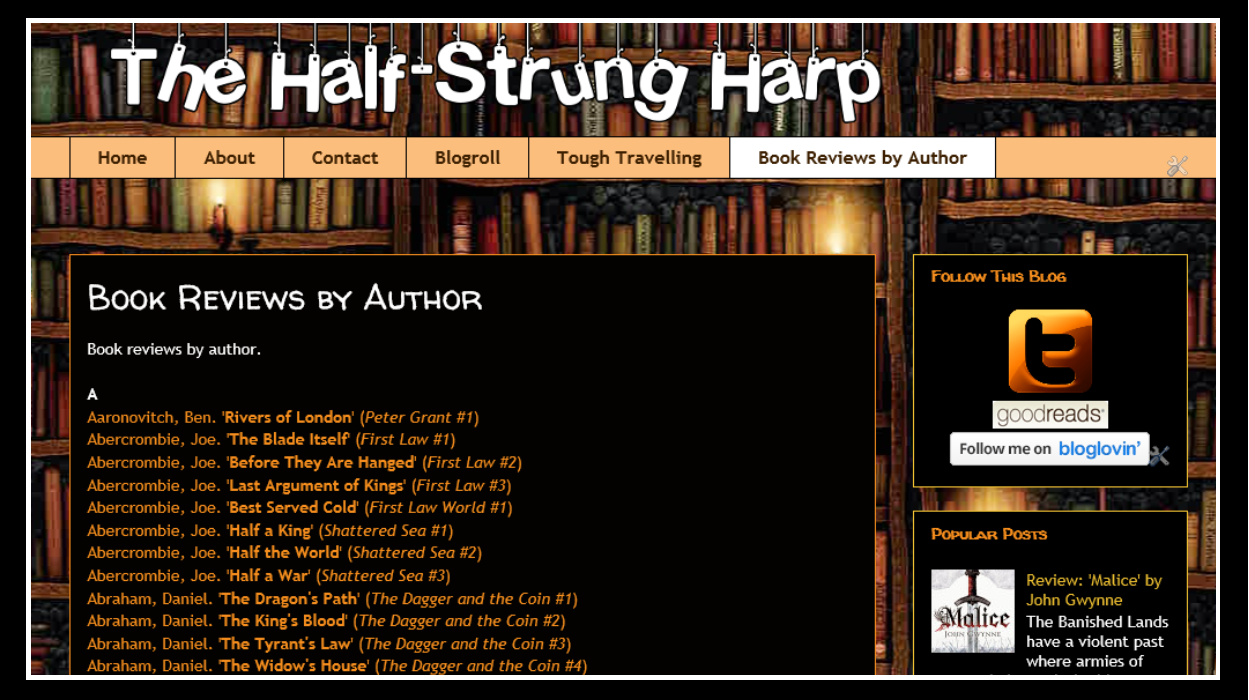 Shhh! I’ve snatched a moment at the keyboard while the cats aren’t looking. I’ll tell you a thing or three about myself as quickly as I can, before the mogs realise I’m attempting to do something productive and converge on me . . .

I joined the online fantasy community in 2013 when I ventured into the world of book reviewing. My blog, The Half-Strung Harp, helped me meet some awesome new people – authors, agents, fellow bloggers, and just generally cool folks – through social media, as did participating in weekly features such as Tough Travels.

Writing regular and detailed book reviews also honed my writing skills and developed my ideas about what makes a good book, since it encouraged me to look deeper into why I did or didn’t enjoy certain books.

(If you were wondering where the blog’s title came from, it’s lifted from a satiric poem by George Gordon Byron called ‘English Bards and Scotch Reviewers’ (1809). Byron uses the phrase ‘half-strung harps’ to refer to writers who publish sub-par novels and poems that are nonetheless praised by critics (whom he referred to as tasteless ‘tyrants’). I had no clue what I was doing when I first started blogging, and wanted the name of the blog to reflect that. To be fair, it’s still an appropriate image for what I’m doing, except that now I’m blundering through the process of writing fiction rather than reviews!)

Technically I was nine when I wrote my first book. It was hand-written and illustrated, and featured a protagonist called Mitch who discovered a spectacular gem in an underwater cave (and who also happened to be an otter). Unfortunately this priceless work of fiction has been lost in the mists of time (or possibly the attic . . . OR my little sister ate it. She destroyed a lot of my books before she was old enough to actually read them).

Slightly more recently I’ve written and self-published a novelette, a horror-fantasy hybrid called ‘Danse Macabre’. In addition to my main work-in-progress (a fantasy trilogy that may or may not ever get finished) I’m currently playing about with various short stories, as well as a poem or two.

I write what I know and love, and so every word I type falls firmly within the fantasy genre. My main influences are Steven Erikson, Joe Abercrombie and Terry Pratchett: I really admire the way all three authors suffuse their writing with humour without sacrificing the integrity of their plots or characters. I have this insane dream of one day having my own books blurbed by Erikson . . . if only I can finish writing them.

That dream is also dependent on my ability to avoid being killed and eaten by the mogs . . .

A shamelessly crazy cat lady. Luckily I’m married to a crazy cat man, and we share a very small terraced house with four quirky felines. They’re called—wait, where are you going? Come back! STAND STILL WHILE I SHOW YOU PICTURES OF MY FURRY CHILDREN, GOD DAMN YOU.

That wasn’t so bad, was it?

(Fun fact: I just found out from the doctor that I’ve developed an allergic reaction to cats. This explains the constant cold-like symptoms and wheeziness I’ve been experiencing over the last few weeks . . . but does not explain why the universe is so cruel.)

So there you have it. Me in a nutshell. Let’s just hope I’m not also allergic to nuts . . .