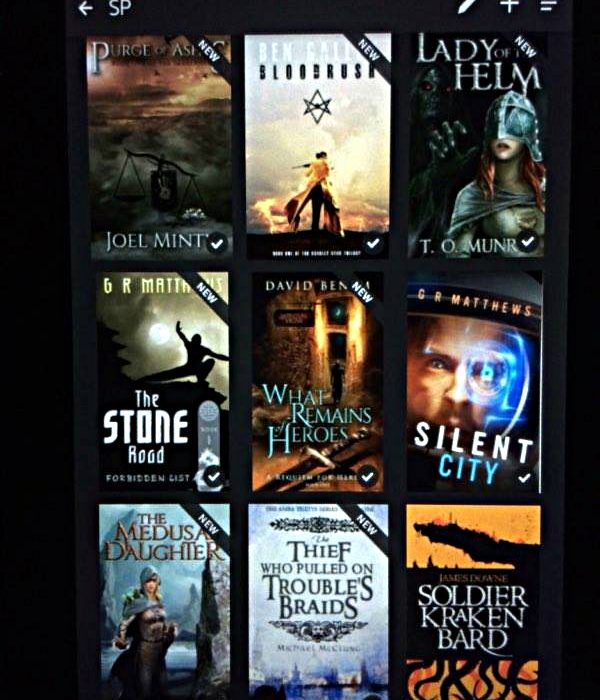 I can’t say I’ve ever used the word ‘awhirl’ in casual conversation before – well, apart from just now – but I’ve spent the past month awhirl in Cool Book Stuff™. Such as . . .

I’m now officially a member of the Fantasy-Faction team!

I’ve followed the site – co-edited by Marc Aplin and Jennifer Ivins – for years, and have always admired the quality of its articles and the regularity of its reviews. I’m flattered and grateful, excited and proud beyond belief to be able to call myself part of the team. (I’ve got a PAGE and everything!)

And as if that wasn’t amazing enough, I now get to join in with the Self-Published Fantasy Blog Off (#SPFBO) for the first time. And as part of the F-F judging panel, no less!

I’m a bit late to the party, but playing catch-up has been a lot of fun. I’ve read, scored and commented on the opening chapters of at least ten submissions, many of which have pleasantly surprised me. In fact, there’s more than one that I’ll probably go on to read even if it doesn’t make it through this round.

As you can probably guess, my own writing has taken a bit of a back seat whilst I focus not only on reading and reviewing, but also beta reading.

It’s been pretty much one year exactly since my first ever writing buddy (Kareem Mahfouz: notorious whiskey-sponge with the enviable power to pull entire storylines out of his arse as he writes) sent me the first prologue of the first draft of his first novel. Now – twelve months and 192,000 words later – I have the final part of his first draft to read and feed back on, which I’m REALLY looking forward to.

In fact, I got so excited by the story that I made a thing inspired by Kareem’s favourite character:

Remember the name: Kareem Mahfouz. You heard about him here first, people!

My own word count may have ground to a temporary halt, but the reviews for my novelette, Danse Macabre, have been unexpectedly flooding in!

Seasoned reviewer James McStravick shared his thoughts over on his blog, The Observant Raven; and the excellent T.O. Munro (author of Lady of the Helm) penned a particularly detailed and thoughtful review in which he called Danse Macabre “well-written”, “ingenious” and “captivating”.

To be honest, I’m still in shock. Awesome-shock.

Since my Kindle (Mr. Norrell) appears to have gorged himself on ALL THE THINGS over the last few months, I’ve compiled some of the best-looking indie books he’s found into a reading list:

Just look at those bad boys! Norrell’s definition of ‘new’ is somewhat questionable – I’ve had some of those books since the last SPFBO! – but still. Enticing, eh?

Right now I’m working through The Spider’s War by Daniel Abraham (which is great, by the way), but it shouldn’t be too long before I get around to this little beauty:

That’s an eARC of the upcoming Valley of Embers by indie author Steven Kelliher. The first in the Landkist saga, it’ll be available to buy on 16th August 2016 from Amazon.

That’s it (for now). July, I’m sorry to see you go. You’ve been a really positive month for me. August, you– oi! August! Listen! You have a lot to live up to, so you’d better start right now.

Oh! And for those who’re interested in the brilliant SPFBO, I urge you to take a few moments to check out the main page on Mark Lawrence’s site. Like, right now.