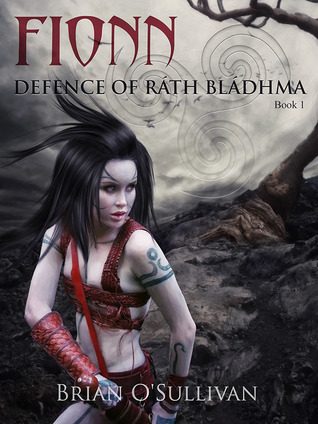 Fionn: Defence of Ráth Bládhma is one of ten novels in the final round of Mark Lawrence’s Self-Published Fantasy Blog-Off (SPFBO) 2016. The review was originally posted on Fantasy-Faction on 4th December 2016; updates on the contest’s progress can be found here.

Brian O’Sullivan’s SPFBO offering – Fionn: Defence of Ráth Bládhma – was something of a bumpy ride for me, at least at the beginning. Upon reaching the end of the first major chapter I felt as though nothing had really happened. However, by that point, I did know the entire detailed history of several minor characters… as well as Bodhmhall’s vegetable patch.

I was just 12% in when I first started to jot down notes condemning various aspects of the book. Oddly enough, my complaints echoed the pattern of unevenness which I also found in Larcout: a solid opening, followed by a disappointing shift in tone and location. I felt so strongly about the first chapter following the prologue that I began highlighting passages in the book and making notes in preparation for this review. Looking at these notes now, my early complaints seem to boil down to three main issues.

By anybody’s reckoning, she was a striking woman. Tall and slender with a generous mouth and intelligent, brown eyes, her looks had been spared the ravages common to many of her contemporaries: the trials of childbirth and the arduous physical labour required to sustain the community. Daughter of Tréanmór, rí of Uí Baoiscne, Bodhmhall had enjoyed a privileged childhood in the fortress of Dún Baoiscne, something she increasingly appreciated as the years rolled by.

As you can see, the prose itself is highly competent. However, I found myself continually irked by repetitive sentence structures:

Off to her right, on the western ridge, a murder of ravens suddenly took flight, crowing up from the trees in an angry flutter of wings. With a shudder, Bodhmhall forced herself to open her mouth and stuck out her tongue to taste the air. Almost immediately, she withdrew it with an expression of revulsion. […] Absorbed in her contemplation, she barely noticed this fresh disruption. Startled, she turned…

This infuriating repetition is the second issue. The third – and most prominent – is the infodumps. The narrative frequently devolved into history lectures that had me skim-reading many a page and the openings of certain paragraphs left me sighing with impatience:

“Even after all these years…

History, geography, economics – the author appears keen to ensure we have a firm grasp of… well, everything. But for me, the most awkward instances of this would occur each time we’re introduced to a new character. For example, Bodhmhall walks past a warrior standing on guard duty. She does not interact with him; nonetheless, we’re treated to a detailed account of his personality and his place within the ráth’s hierarchy.

A tall and pleasant youth, Aodhan had inherited his father’s easy manner but was already …

This continues for almost an entire page. The same thing happens with the character of Cairbre shortly afterwards. It’s clear that Cairbre is some kind of adviser when he comes to speak to her, yet the author insists upon dedicating a page and a half to his not-so-abridged life story.

At the time, I found this method of compartmentalising

of characters to be very odd and more than a little jarring; as though Fionn is a wiki, and every time a new character is mentioned the reader is forced to follow the hyperlink and read their character summary before being allowed to proceed. In short: after a promising prologue, I felt completely let down by the first chapter. Unnecessary physical descriptions of the protagonist, repetitive sentence structures, and pervasive infodumps made for a difficult (and frustrating) reading experience.

Thankfully, it soon became clear that most of my complaints were present (or at least noticeable) only in Bodhmhall’s problematic first chapter. My disappointment promptly dissipated once I reached chapter two, and was (more or less) kept at bay for the rest of the book.

I’ve since read Jared’s review of Defence of Ráth Bládhma, in which he talks about the book’s ‘functional’ tone and observes that it continues throughout the entire novel. After careful consideration, I can confidently say that I disagree with this assessment. In my opinion, the ‘functional’ tone and overly-detailed prose are limited to Bodhmhall’s chapters and reflect her character’s worldview as opposed to the author’s style. As the leader, it’s her place to worry about the details; and as a druid, it’s imperative that she possess a wealth of knowledge about her land and people.

That said, it’s only by contrast that we come to appreciate Bodhmhall’s calming narrative voice. The alternating PoVs of Bodhmhall and her lover, Liath Luachra, complement each other perfectly; Liath Luachra’s brusqueness and humour provide a pleasant counterpoint to Bodhmhall’s grave pragmatism. Her grim sarcasm is particularly welcome:

Ah, yes. The Great Wild backs down when I tramp through its forests. Wolves shit themselves and slink into the undergrowth at my passing. Even the Faceless Ones, the ghosts of hazy glades, hide and tell each other fearful tales of the dreaded Liath Luachra who will come through the shadows to take their heads.

You can probably guess that Liath Luachra’s chapters were by far my favourites. Tough, tenacious and unflinchingly truthful, Liath Luachra is an admirably strong female protagonist. Her own inner conflict – between her past and present self, her loyalty to Bodhmhall and her own sense of right and wrong – is as engaging as her woodland exploits, and her fighting scenes are stark and exhausting.

The attack on the ráth itself was, I felt, a little bit anticlimactic, largely due to one or two instances of foreshadowing that never actually came into play. And the supernatural elements –the sinister ‘Tainted One’, Bodhmhall’s gift – played a disappointingly small role. However, besides being a captivating sub-plot and fuel for nightmares, I get the impression that there’s a much larger force at work, and that the Tainted One’s assault on Ráth Bládhma was only the beginning. And besides: Liath Luachra’s pulse-pounding finale more than made up for whatever else may be lacking.

The actual scale of Ráth Bládhma’s story might be modest, but this only serves to magnify the importance of events and the significance of each life lost. Even the battle-hardened Liath Luachra thinks twice before taking on an opponent, even one who is unprepared. Second century Ireland is cold, dirty, brutal and ugly, and its inhabitants’ moment-to-moment fight for survival even more so.

In fact, this sense of realism is one of the things I enjoyed most about both PoVs. Both protagonists have their faults, and each have their weaknesses. Bodhmhall is the spiritual leader of the community at Ráth Bládhma; as such she faces constant doubt and a ceaseless barrage of difficult decisions. Liath Luachra is a skilled warrior, but she’s haunted by dark memories and is far from invincible.

I admire the way O’Sullivan does what he feels is necessary to tell his story. Defence of Ráth Bládhma is not dense or complicated, but nor does it compromise to pander to more casual readers. This includes making the choice to retain aspects of the book that some readers will understandably find fault with.

For instance, the chapters are very long. While this isn’t something that bothers me personally, I understand that for some it can make reading feel like a chore. In O’Sullivan’s case, however, this structural choice suits the story perfectly. By giving the reader plenty of time to fully immerse themselves in each PoV – rather than jumping about from one to the other – the author ensures that the book is built around character relationships as much as external conflict (another aspect on which Jared and I clearly disagreed!).

The chapters may be long, but the book itself is relatively short. Once I’d overcome my initial teething problems with the first chapters I found myself flying through it, eventually realising that even the character infodumps (or ‘wiki entries’, as I referred to them earlier) have a purpose: to keep the focus on the two central characters, both of whom I developed a strong emotional connection to.

I realise that much of this review focuses on the negative. This is because I suspect that in other circumstances I might not have persevered, and am keen to assure anyone encountering similar issues that the book is in fact well worth continuing with. In actuality, I LOVED this story. The first thing I did after finishing it was to head over to the author’s website – on which I discovered a bloody fantastic pronunciation guide (with audio clips!) – and add the rest of his Fionn Mac Cumhaill books to my wishlist.