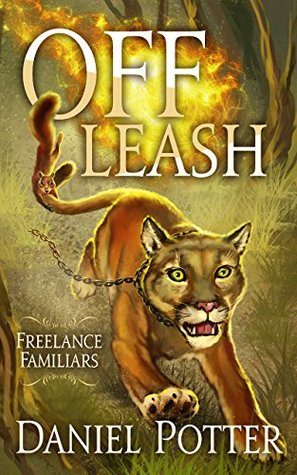 Off Leash was a semi-finalist in the 2nd annual Self-Published Fantasy Blog-Off. This review was originally published on Fantasy-Faction on 12th September 2016.

A few weeks ago, the SPFBO team decided on our seven semi-finalists. In some cases, the decision was easy. But when it came to Daniel Potter’s entry, Off Leash, we were uncertain as to whether or not it could hold its own in the next stage of the competition.

Why did we have doubts? Simply put: it’s an insane urban fantasy tale about a man who turns into a cougar, and we didn’t know what to make of it. Words like “strange” and “different” got thrown around very liberally during our group discussions. Off Leash is shamelessly, even proudly farcical, and I think we all had doubts about whether Potter was a serious SPFBO contender. We mistook the author’s light-hearted humour and sarcastic self-awareness for a lack of gravity – perhaps even of commitment – and we were absolutely wrong.

“Just great. I lose my voice but I get to keep my spare tire? Further proof that the universe itself is a sadistic bastard.”

It didn’t take long for our reservations to melt away. Potter’s jaunty prose and irreverent tone soon had us chuckling (and occasionally groaning) whilst turning the pages. Protagonist Thomas Khatt (geddit?) reacts to his improbable circumstances with dryly humorous observations, many of which involve his own newfound ineptitude at performing basic tasks.

“The stealth gig that cats are known for? We’ll file that under a learned skill and not a standard feature.”

The premise is batshit crazy. But its comedic potential is undeniable and Potter exploits it well, milking each scenario for every last drop of humour but very rarely taking any joke too far. It helps that Thomas, the protagonist, is quite cynical about the whole situation at first – mirroring our own scepticism, in fact!

“For a moment I feared I had fallen into a Disney film and the kitchen appliances were about to burst into song. I gave the toaster a withering look just in case.”

The narrator’s engaging voice brings to mind Ben Aaronovitch’s Peter Grant, while the ceaseless flow of droll observations is reminiscent of the style of Sir Terry Pratchett. Whether or not you’re familiar with either author, my point is that in Thomas Khatt, Daniel Potter has created a protagonist who is a *lot* of fun to hang out with.

“Dogs rolling on their backs might be submission, but for us cats, it’s more a statement of ‘I will fuck you up’.”

Big cat or not, like any good protagonist Thomas would never have survived his first day on four paws without the help of a few secondary characters. In this case it’s Rudy the pyromaniac squirrel, and an ostracised Irish witch named O’Meara.

“Wide eyes stared down at me from a face framed with fire-red hair. Her blue eyes followed the theme, the color of burning gas on a cook top.”

As you can see: surrealism (and hilarity) aside, Off Leash is very competently written. With the exception of a few proofing issues, it is also well edited. The story is well-paced and intriguing, and the narrative voice is distinctive, engaging and consistently entertaining.

“[the house] seemed to be trying to convince the smaller house to scooch out of the way by threatening to sit on it.”

With its on-point descriptions and funny-bone-tickling turns of phrase, Off Leash is perhaps the most entertaining SPFBO entry we’ve read so far. Admittedly, we had gripes. A few of Potter’s action sequences hurtled by so quickly that we were left unsure as to what was going on. And the ending somehow didn’t feel quite as climactic as we’d anticipated – though that’s perhaps because we’d been spoiled by the book’s rollicking pace up until then. One of the only entries written in first person, Off Leash is bold and it stands out from the crowd; and overall it’s a highly enjoyable read.

Potter’s debut may be a slightly unorthodox entry in a competition dominated by writers of ‘traditional’ fantasy. But that doesn’t make it any less than 100% professional. The editing, the cover design, the formatting, the interior art, the extra short story included at the end – all combine to complement the story and produce an end product that any author would be proud of. In the end, the deciding factor was not the book but the potentially divisive responses from the other nine judges in the final round. While Off Leash was a very strong contender, we reluctantly agreed that, of the few entries still remaining, it was probably not the most likely candidate to win. On the upside, though, we also agreed that we’d definitely like to read more of the Freelance Familiars series in future.

The Verdict: Consistently entertaining, slightly silly, and all around light-hearted tongue-in-cheek fun…though not entirely devoid of grimness! We enjoyed Off Leash’s quirky and irreverent tone, and overall we laughed at its absurdity far more often than we rolled our eyes at it. The author’s prose is direct and engaging, and while we weren’t initially convinced by the premise, the book’s voice and sheer personality quickly won us over.