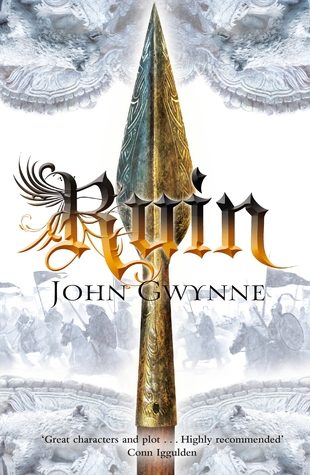 As I’ve already talked about here, the Gemmell Award longlists are up and I’m reposting my reviews of the nominees I’ve read. (I’ve already done Joe Abercrombie (here) and Mark Lawrence (here).) Next up is yet another deserving title from my five star club: ‘Ruin’ .

It’s not often that I care enough about a book to feel physically sick with nerves as I turn the pages, waiting to see what will happen to a beloved character. It’s also not often that a book makes me cry like a baby. Ruin drove me to both of these, leaving me a sobbing wreck after reading the final line. But I won’t hold that against it, seeing as it’s also an awesomely epic and ambitious tale that delivered everything it promised and more.

Ruin is the third book in John Gwynne’s fantastic The Faithful and the Fallen fantasy quartet, a series which has so far woven an incredibly dense, complex and engaging story. Although the books appear to be getting longer and longer they are also becoming easier and easier to read, a testament to the author’s flowing style and continually improving writing skills. Ruin boasts a cast of no less than fourteen point-of-view characters – FOURTEEN!! – reflecting the epic scale of the series. Far from being confusing, this actually enables us to see the events of the story from conflicting perspectives; and while it’s clear who the true ‘baddies’ are, many characters are formed in shades of grey and it’s fascinating to see their internal conflicts and motivations. Ruin is also notably populated with strong female characters – such as Cywen, Coralen, Fidele, Laith, Brina, and Kulla – who serve important roles even when relegated to the background. Although there are so many characters to keep track of, and although it’s been over a year since reading Valour, I found that I immediately remembered most characters from previous books, which just goes to show how much I’ve become invested in them during the many hundreds of pages of their story so far.

While I’m still not overly-fond of the A Song of Ice and Fire-style ‘named chapters’ in general, I have to admit that Gwynne really, really makes it work here. Many chapters are fairly short and rapidly alternating, creating a sense of adrenaline and setting a breathless pace that had me fumbling to turn the pages faster and mumbling to myself, “just one more chapter”. Other chapters are longer and more detailed explorations of individual characters’ motives and emotions, providing intriguing insights into nearly every aspect of the overarching conflict. With so many disparate groups of characters to keep track of, each chapter becomes a keyhole through which we glean hints of what might happen, and through which we gain numerous perspectives on events. Viewing a battle – along with its associated victories, losses and deaths – from different sides of the conflict brings humanity to each and every character, whether ‘good’, ‘evil’, or in-between.

I said in my review of Malice that I’d like to see future battle scenes to be more personal and character-driven, and wow has that wish been granted. The prophesied God-War has finally begun in earnest, but Ruin shows the true face of what this kind of war would entail. Gwynne tells an incredible story of unlikely heroes, well-meaning villains and tired refugees; a story packed with messy skirmishes and small-scale ambushes; a story of confusing conflicts, with people on both sides getting lost and making mistakes, with losses slowly adding up and constant fighting taking its toll both physically and mentally. The action comes thick and fast and it feels as though the reader is there in the midst of it all, sweating and bleeding and dodging attacks from every quarter. The character-driven narratives and their focus on the immediacy of each situation makes it feel a lot less glorious, but a lot more real.

Needless to say Ruin is much grimmer and gorier than its predecessors. The Banished Lands are at war: no longer charmingly rural, the Celtic settings have become wild and threatening, with large parts of the novel set in uncharted forests, treacherous marshes and daunting giant ruins. This makes for some weird and wonderful imagery, and creates a tangible atmosphere of threat and tension. In fact there’s a real gritty feel to the entire story, and I think the point the author is making here with Ruin is: shit just got real. Despite this, Gwynne manages to create a sense of grimness and overwhelming odds without resorting to the George R R Martin method of mass-murdering every character in sight. Ruin’s underlying tone is, surprisingly, one of optimism: its characters are strong and determined, working together to cope with their losses and continue their attempts to achieve the impossible. Although bleak in places and sickeningly violent in others, grimdark this ain’t. And I like that.

It’s dark, thrilling and bloody. But Ruin’s strongest point is, for me, its characters. Gwynne takes character relationships crafted throughout the first two novels – between friends, family, loved ones and, especially, animals – and brings them beautifully to the fore without overstating them, whilst also forging new ones along the way. He never lets us forget that this entire series is a sprawling net comprised of a thousand little strands of humanity, and that’s what makes it such an engaging and sometimes emotional read. Gwynne has really, really upped his writing game with Ruin, and I have every confidence that the final instalment of The Faithful and the Fallen will continue to thrill, continue to astound . . . and, of course, continue to make me cry like a baby.

(Review originally posted over at halfstrungharp.com on 1st August 2015.)

The Banished Lands are engulfed in war and chaos. The cunning Queen Rhin has conquered the west and High King Nathair has the cauldron, most powerful of the seven treasures. At his back stands the scheming Calidus and a warband of the Kadoshim, dread demons of the Otherworld. They plan to bring Asroth and his host of the Fallen into the world of flesh, but to do so they need the seven treasures. Nathair has been deceived but now he knows the truth. He has choices to make, choices that will determine the fate of the Banished Lands.

Elsewhere the flame of resistance is growing – Queen Edana finds allies in the swamps of Ardan. Maquin is loose in Tenebral, hunted by Lykos and his corsairs. Here he will witness the birth of a rebellion in Nathair’s own realm.

Corban has been swept along by the tide of war. He has suffered, lost loved ones, sought only safety from the darkness. But he will run no more. He has seen the face of evil and he has set his will to fight it. The question is, how? With a disparate band gathered about him – his family, friends, giants, fanatical warriors, an angel and a talking crow he begins the journey to Drassil, the fabled fortress hidden deep in the heart of Forn Forest. For in Drassil lies the spear of Skald, one of the seven treasures, and here it is prophesied that the Bright Star will stand against the Black Sun.