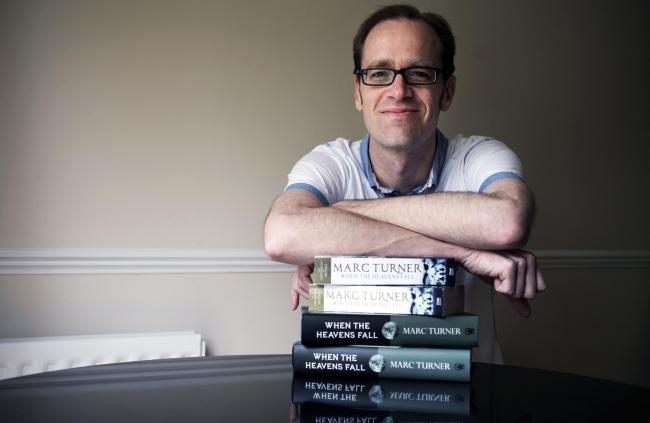 Marc Turner is the author of the epic fantasy series The Chronicles of the Exile. I had the pleasure of interviewing him for Fantasy-Faction  in September to celebrate the release of Red Tide, the stunning third novel in this ongoing series.

Good morrow, Mr. Turner! To start, I’d like to mention that I’m rather fond of your work. I picked up When the Heavens Fall because reviewers compared it (favourably!) to classic fantasy series such as The Malazan Book of the Fallen and The Black Company. I certainly wasn’t disappointed, and I went on to enjoy your second novel, Dragon Hunters, even more.

How do you feel about the (inevitable) parallels that readers draw between your work and others? Are there any unlikely comparisons that have surprised you?

MT: “Since When The Heavens Fall came out, I’ve been compared to so many different authors, I’ve lost count. One reviewer compared me to nine in a single sentence – and five of those I’d never even read before!

“Comparisons can be flattering, but I think they are also dangerous things because they create (sometimes unrealistic) expectations in the reader. I never compare myself to any other author. I can say which writers have most influenced me – Steven Erikson and Joe Abercrombie – but the degree to which readers see those influences in my books varies greatly.”

You might find this hard to believe, but there are a LOT of people who have yet to dip their toes (eyes?) into the Chronicles of the Exile. With that in mind, could you perhaps give us a quick rundown of what new readers can expect from the series . . . and what the rest of us can expect from book three, Red Tide?

MT: “Readers can expect to laugh, to cry, to wear out the edges of their seats, and ultimately to finish each book in the series with an overwhelming urge to buy the next.

“As for Red Tide in particular, there’s not much I can say without giving away spoilers. But it features an entire nation of pirates, a man who can make his dreams manifest in the waking world, and perhaps a sea dragon or three. It’s my favourite book of the series so far, and the response from readers has been very positive.”

It has indeed – with very good reason!

Following on from that, would you be so kind as to dazzle us with what I like to call a ‘shark elevator pitch’? (It’s exactly the same as an elevator pitch, but with sharks.) (Well, one shark. Who, by the way, is currently picking between his rows of teeth to try and dislodge the remains of the last author who stepped onto his elevator.)

MT: “If I had to describe the Chronicles of the Exile in a sentence, I would call it epic fantasy with a dark edge and a generous sprinkling of humour.

“And your sharks don’t frighten me. I have sea dragons on my side.”

Damn you, Turner, and the sea dragons you rode in on. Looks like you’ll live to write another day!

Speaking of writing and living: what’s the most exciting part of being a professionally published author? Aside from no longer having to sneak around supermarkets slipping photocopies of your hand-crayoned manuscripts inside Weetabix boxes, of course.

MT: “I do that thing with the Weetabix boxes too! Did that too. I meant did that too, obviously.”

MT: “The most exciting part of being an author has got to be seeing a new book hit the shelves, but I also enjoy the build-up to publication. Among other things, you get to sign off on the final version of the manuscript, see the cover for the first time, and hold the advance reader copies of the book in your hands.”

That does sound exciting! And the most daunting part?

MT: “Time management. At the moment, I’m drafting book four in the series, preparing articles for a blog tour, writing two short stories for fantasy anthologies, promoting When The Heavens Fall in Germany (it has just been published there), and doing a load of signings at Waterstones. Don’t get me wrong, I’m not complaining. But since I became a full-time writer, it seems like I have a lot less time to actually . . . write.”

Well, you must be doing something right. It’s barely more than a year since your debut dropped but you’ve gained quite a lot of traction within the fantasy community in that time. How does the public’s reaction to your work – and to yourself – compare with any early expectations you might have had?

MT: “I don’t recall having any particular expectations – which is probably just as well.

“If there is one thing that has surprised me, it is the different reactions I receive to my characters. I think it is important that in books with multiple POV characters (like mine), each of the characters should have a distinctive “voice”. Inevitably that means readers will like some characters more than others, but I am taken aback sometimes by the degree to which different people respond to the same character.

“Take Romany from When the Heavens Fall, for example. Fantasy Book Review said the following about her: “Intelligent, cunning, immensely likeable, her affable irritation and eventual humanity in the face of the maelstrom of uber-fantasy is remarkably levelling.” Another reviewer, though, simply dismissed her as evil.

“Of course, everyone is entitled to their own opinion. Even if it is wrong. ;)”

Marc, in the past you’ve spoken at length about the importance of dialogue, and have (quite rightly) pointed out that writers can learn a lot about their craft from other artistic mediums, such as video games. But in a world such as yours – geographically sprawling, layered with history, packed with ‘epic’ elements such as gods, magic, battles and monsters – how would you rate the importance of dialogue in relation to all the other elements?

MT: “I’m not sure dialogue is more or less important than any other element of a fantasy novel, but it’s the part I enjoy writing most. It’s great both for shining a light on character and injecting humour. When I have cause to dip back into my own books, it’s usually dialogue that I end up reading.”

You certainly have a knack for it. I adored the barbed exchanges between Romany and the Spider in When the Heavens Fall, and without doubt one of my favourite aspects of Dragon Hunters was the snarky dialogue between Kempis and… well, everyone he spoke to. Are there any particular fictional characters and/or authors who inspired some of the witty repartee that makes your protagonists so much fun to follow?

MT: “The authors who have most inspired my dialogue are again Erikson and Abercrombie. I don’t think Erikson gets enough credit for his humour – or at least I don’t see him credited often enough. Though oddly when people discuss his most amusing characters, the names that most frequently come up are Tehol and Bugg, whereas I found their humour to be hit and miss. I find some of his other characters far more entertaining.”

Erikson is definitely a master of humorous dialogue, be it subtly barbed or openly cutting. Speaking of sharp-tongued protagonists: am I right in saying that you’re currently working on a short story starring none other than the infamous Mazana Creed? What can we readers (new and old) expect from her?

MT: “Yes, Mazana Creed stars in a short story I have written for Grimdark Magazine’s Evil Is A Matter Of Perspective anthology. It is set a few years before the events in Dragon Hunters, and Mazana has been ordered to hunt down a notorious pirate in order to earn a place on the Storm Council. But, being Mazana, she’s going to do things her way.”

Sounds intriguing! Oh, and while we’re on the subject: now seems like a good time to mention that you’ve also written a short story featuring Luker Essendar, who also happens to be the first character we meet in When the Heavens Fall. Do you have any more shorts lurking up your, um, shorts? And if you had to write a collection of short stories set in the Lands of the Exile, which characters would you pick to headline?

MT: “I’m writing another short story at the moment for the Hath No Fury anthology which has been funded on Kickstarter. It will feature Jenna from When the Heavens Fall – probably. In the future, I might do some more stories set in the Lands of the Exile featuring characters from the series. I like the idea of some detective stories starring Kempis and Sniffer from Dragon Hunters. Kempis himself is less enthusiastic about the idea, though.”

That would be epic! Please, please, PLEASE make this happen. (Please?)

Before we finish, Marc, I have to ask: cats or dogs?

MT: “Ah, that age-old conundrum. Whichever one I choose I’m going to end up upsetting lots of people, so you’re probably expecting me to hedge my bets. No beating around the bush from me, though, I’m going to come straight out and say … neither. Give me a dragon any day.”

Thanks so much for your time, Marc. Good luck with book #4!

Red Tide, the third book in Marc Turner’s Chronicles of the Exile, is available to buy RIGHT NOW. Additionally, you can read Marc’s short story, ‘There’s A Devil Watching Over You’, on Tor.com, or listen to the audio version on his website.