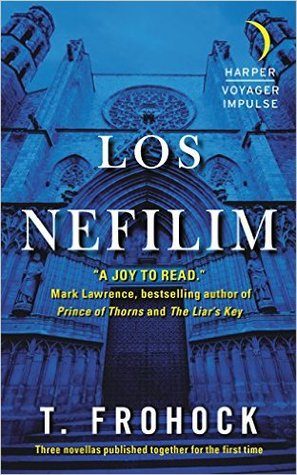 RIGHT NOW is a phenomenal time to be a fan of speculative fiction. Seriously: there’s an insane amount of amazing SFF writers in today’s market, and the modern fantasy reader is spoilt for choice with a selection that would leave Mr. Norrell gobsmacked and which would – if it were all edible – satisfy even Dudley ‘Big D’ Dursley.

But it’s sadly inevitable (inedible, too – sorry Dudders) that for every Mark Lawrence or Robin Hobb there are a thousand other writers striving to make a name for themselves – lots of whom are probably just as talented, and some perhaps even more so. In the struggle against obscurity, this means that many equally-deserving authors are overlooked by those caught in the gravitational field of the ‘big names.’ And while I’m in no way saying that those successful few are unfairly hogging the spotlight, I am suggesting that sampling the work of lesser-known writers may prove to be less of a gamble than you might think.

Frohock is by no means a newbie to the writing game: her debut novel, Miserere, was published by Night Shade back in 2011 and garnered a relatively small but loyal following. However, Miserere was (erroneously) marketed as religious and YA fiction, neither of which accurately reflect the novel’s content or target audience. Religion features heavily in the story, but it certainly isn’t a ‘religious’ novel: Frohock wasn’t writing from a religious perspective so much as borrowing imagery from lots of existing religions in order to create a vivid and fantastical setting for her dark (and sometimes brutal) tale.

Miserere is a surreal and enjoyable read that unfortunately still remains in the shadows of obscurity. Since its release Frohock has continued to weave dark fantasy into real-life religion and history. Her three most recent novellas – In Midnight’s Silence, Without Light or Guide, and The Second Death – have just been published together as Los Nefilim. This wonderful collection is a joy to read: each novella flows seamlessly into the next to form a well-rounded and well-plotted story in three beautifully-titled parts.

A superbly dark and atmospheric fantasy set in 1930s Barcelona, Los Nefilim is a captivating tale of eternal conflict between angels and demons. First off, let me clarify that even though it’s set in pre-WW2 Spain I hesitate in calling Los Nefilim ‘historical fantasy’. The reason for this is that although the historical context has some relevance to the events, and although the settings are consistently vivid and immersive, I feel as though the story itself transcends both time and place: Frohock weaves her tale with admirable finesse using the colourful and tightly-knit threads of her protagonists, who – despite being vividly drawn – are so sympathetic it’s possible to imagine their situation happening anywhere, any time, and to anyone.

Los Nefilim is centred around the character Diago, a troubled but immensely likeable Nephilim of mixed angelic and daimonic descent. Diago and his partner, Miquel, have been devoted to one another for centuries, but both their loyalty and livelihood are threatened when the escalating supernatural war invades their personal lives. Diago and Miquel’s relationship defines – and is defined by – events, and is inseparable from the story itself. Frohock succeeds in pulling the reader deep into Diago’s world: a realm of harsh decisions, few of which can be made without endangering either his lover or his cause.

The best part is that the author doesn’t bash us over the head with the internal ‘true-love-vs.-greater-good’ conflict. Los Nefilim are the very embodiment of human nature in all its shades of grey; and nothing is ever so simple as ‘good vs. evil,’ even when angels are involved.

Especially when angels are involved.

Just as well, then, that the heroes of Los Nefilim are deep, fully-rounded characters who are far too complex to be defined simply by which master they serve; or, for that matter, by their sexuality. Issues of gender are neither downplayed nor dwelt on, and the fact that Diago and Miquel are both men is but a natural part of the story.

(In fact, the author’s egalitarian approach to gender holds up a mirror to our own lives in the least patronising way possible. Simply put, Frohock shows us a society where men are just as vulnerable as women, and often suffer in silence because of unequal and arbitrary gender expectations. She shows us a society in which men are just as likely as women to experience rape, and verbal abuse, and sexual harassment – a fact we all need to recognise and empathise with.)

On the surface, Los Nefilim could also be regarded as a moral tale about overcoming intolerance: the Nephilim’s secret war does indeed serve as a clever analogy for how homosexuality was stifled beneath the stigma of a god-fearing society. But while this is without doubt a huge part of the story, in my opinion it’s actually far subtler than that. Great speechifiers and glorious martyrs our protagonists ain’t: they are heroes of necessity, not intent. And Frohock doesn’t idealise Diago and Miquel’s relationship so much as naturalise it. Their connection is shown through understated dialogue and non-verbal interactions, and by the gradual emergence of both men’s paternal instincts as they work hard to create a harmonious family unit for Diago’s son.

For me this was a huge relief. In the past I’ve pointed out more than a few female writers who draw on shallow stereotypes of sexual promiscuity and unequal partnerships in an attempt to portray same-sex male couples. Thankfully, Frohock avoids this entirely: she doesn’t ‘write gay characters’; she writes characters who happen to be gay. Contrary to stereotypical beliefs – and exactly like couples of any orientation – Miquel and Diago don’t hump like rabbits, nor are they joined at the hip. And their relationship might be the pivot on which the events of Los Nefilim turn . . . but no one can accuse the story of being ‘too romantic’.

Frohock writes with precision and balance, and the result is a faultless blend of beauty and brutality, cruelty and love, action and reaction forming a story that is pleasantly complex and satisfying. She lets us hear colours and see music. Her prose is wonderfully lyrical, yet functional. Unlike yours truly, Frohock isn’t one to waffle: she uses the minimum amount of words to say what she needs to say in the most beautiful way possible.

Bear with me. I’m going to try and explain better using an overcomplicated and probably inappropriate metaphor.

Imagine that books are like . . . banquets. No, really: the table is the plot, the tablecloths the setting, the food the story and the centrepiece the characters. Or something.

We’ve all read good books. And we can all imagine a good banquet. Right? Good food, good company, good evening.

Now imagine the most unique and exquisite banquet you can think of; one with impossibly rich and varied dishes, and with sentient centrepieces that predict the future but only sometimes tell the truth; a banquet where the wine tastes like hope and the sausage rolls smell like betrayal and the ambient hum of conversation sounds like an argument and a marriage proposal and a promise of violence and thunder, and where everything is made more real by the dark riveting rainbow-coloured music of Frohock’s prose.

Basically, what I’m trying to say is that T. Frohock is a damn fine writer who uses damn fine prose to tell a damn fine story.

Go and check out her stuff. Right now.

T. Frohock has turned a love of dark fantasy and horror into tales of deliciously creepy fiction. She lives in North Carolina, where she has long been accused of telling stories, which is a southern colloquialism for lying.

Collected together for the first time, T. Frohock’s three novellas—In Midnight’s Silence, Without Light or Guide, and The Second Death—brings to life the world of Los Nefilim, Spanish Nephilim that possess the power to harness music and light in the supernatural war between the angels and daimons. In 1931, Los Nefilim’s existence is shaken by the preternatural forces commanding them … and a half-breed caught in-between.

Diago Alvarez, a singular being of daimonic and angelic descent, is pulled into the ranks of Los Nefilim in order to protect his newly-found son. As an angelic war brews in the numinous realms, and Spain marches closer to civil war, the destiny of two worlds hangs on Diago’s actions. Yet it is the combined fates of his lover, Miquel, and his young son, Rafael, that weighs most heavily on his soul.

Lyrical and magical, Los Nefilim explores whether moving towards the light is necessarily the right move, and what it means to live amongst the shadows.