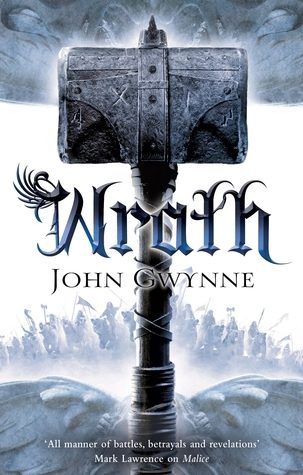 Warning: this review contains spoilers for those who haven’t yet read Malice, Valour and Ruin!

Since 2012, John Gwynne has been promising us that ‘even the brave will fall’… and dear god, they have. Each successive instalment in the epic Faithful & Fallen quartet has seen greater numbers of beloved characters succumb to a rising tide of evil. Casualties of war, victims of treachery – with each novel the death toll has mounted, and so have the stakes.

“The time is upon us. The God-War is reaching its end, moving towards its last great battle, which will decide the fate of this land, and all who dwell within it.”

It feels like forever since Gwynne’s debut, Malice (winner of the Morningstar trophy at the 2013 Gemmell Awards) introduced us to Corban ben Thannon, the blacksmith’s son from humble Dun Carreg. In that time, rivalries have grown, alliances have shifted and battle lines have become muddled: moving, merging, melting and then melding again to form tentative but powerful friendships.

“This war has been decades in the making. But it will end soon.”

The battle lines are drawn, and the Bright Star and the Dark Sun begin their last preparations for the war that neither is likely to survive.

Yes: after four years of building tension and assembling armies (not to mention Ruin’s AGONISING cliff-hanger ending!) Wrath is finally here to show us how it all ends. The fight for the Banished Lands will leave none untouched, and everyone – men, women, giants, angels, demons, children – must choose a side.

“If you choose not to fight against Asroth, then you have already chosen him.”

Like all modern fantasy tales worth their salt, The Faithful and the Fallen features well-rounded characters on all sides of the conflict. The dreaded ‘Black Sun’ of prophecy is introduced to us at the very start of the series as just one of a handful of likeable protagonists. Nathair paves his own path towards the darkness using stones of doubt, fear and manipulation. Gwynne’s antagonists are not caricatures; nor are his gods and demons so clear-cut.

Fans of the series will recognise that each book has brought more darkness. Ruin was particularly gritty and bloody. Wrath is grittier and bloodier still.

But Gwynne’s writing is characterised by an enduring thread of hope, spun by those few genuinely ‘good’ characters who just want to make the world right again. Corban, Veradis, Haelan, Maquin, Camlin, Cywen, Coralen, Brina – all are protagonists that inspire the reader to root for them with every fibre of their being.

“One man, or woman… can make a difference. Can do something. It may not change anything, but we won’t know unless we try.”

By this point, I wouldn’t say that it’s difficult to choose who to root for (since it’s obvious by now that the antagonists are fully aware of whom they’re fighting for), but that Gwynne never lets us forget that the enemy are human, too. Lykos is immoral and sarcastic; an entertaining voice, and a character all readers will love to hate. Rafe is conflicted, cruel and lonely; hateful, yet strangely sympathetic. Uthas is driven by ambition, as is Nathair – whose desperate need to vindicate himself by justifying his past actions is reminiscent of Geder Palliako in Daniel Abraham’s Dagger & Coin quintet.

“I wish I had been there,” Legion muttered. “I would have smashed their bodies and crushed their skulls, I would have broken their bones and fed from their flesh and danced on their dead and sucked out their souls and—“

These darkly comedic exchanges – mostly involving Calidus, Legion and Lykos – are likely to draw reluctant laughs from the reader, again emphasising that there is humanity on all sides of the conflict. (This may seem bizarre, but Calidus and Legion reminded me of cartoon villains Dick Dastardly and Muttley!)

From Cywen’s anti-draig camouflage to Rhin’s unique and bloody Skype methods, there’s grimness on all sides for sure. But there are also plenty of reminders that the Banished Lands have their roots firmly fixed in Middle Earth (and not, say, the Broken Empire): Gwynne writes with a clear awareness of the fantasy tropes he draws on, and conveys a palpable desire to show the world why these familiar tropes remain relevant.

“Skald, the starstone spear, the axe and cauldron, the great tree. So much history, and yet this same war is being fought.”

The author embraces many traditional (some might even say ‘clichéd’) features of fantasy – most notably the ‘Chosen One’ and his Quest for the Magical Gewgaw(s) – but turns them on their head, tweaking and embellishing without ever twisting them too much.

Oh! And on the topic of writing conventions, I couldn’t help but observe throughout that Wrath also exemplifies the rule of ‘Chekhov’s gun’.

(For those not familiar with the term, ‘Chekhov’s gun’ is the principle that every memorable feature in a story should be relevant to the plot. If the writer says in chapter one that there’s a gun hanging on the wall, then that gun must be utilised in one of the following chapters. Looking at it this way, it’s as if every aspect of the story is a promise to the reader, and the author should only make promises he or she intends to keep.)

Say one thing about John Gwynne: say he’s an oath keeper! Wrath is a spectacular culmination of every hint of foreshadowing, all seamlessly woven to ensure the story goes out with all metaphorical guns blazing.

“This will be the day we avenge ourselves for those we’ve lost, the day we right the wrongs done to us, or die in the trying. It will be a dark day, a bloody day, a proud day, for this is the day of our wrath.”

Dark, bloody, proud: Wrath reinforces every value that The Faithful and the Fallen – and the fantasy genre as a whole – stands for. It’s about challenging prejudice and breaking expectations. It’s about putting aside grudges and racial enmity to unite against evil. And it’s about standing up for what’s right – even if that means taking up arms against friends and family who’ve chosen differently.

Most of all, it’s about accepting that it’s everyone’s duty to protect the greater good; that if you don’t do it, perhaps nobody will; that even the smallest person can make a difference.

“Who else is there but us?”

Believe me when I say that Gwynne has crafted a breathtakingly perfect finale to a series that has grown from strength to wonderful strength. Poignant, pulse-pounding and phenomenally paced, Wrath is a satisfying – and heart-breaking – climax that Tolkien himself would be proud to have penned.

This review originally appeared on Fantasy-Faction on November 20th 2016.