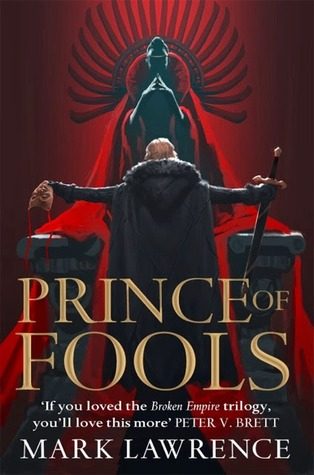 Mark Lawrence’s Broken Empire trilogy was one of my best discoveries of 2013, largely due to its dark tone and brilliantly captivating first person narrative, and I expected big things of Prince of Fools. Lawrence delivered all of them, bigger and better than even I’d been looking forward to. Prince of Fools is the first book of The Red Queen’s War and it follows the converging paths of two very different characters: Snorri ver Snagason, a Norse raider from Viking lands; and Jalan Kendeth, a bone-idle prince from Red March.

Lawrence’s prose is poetic and flowing, easy to read and with the usual characteristic undercurrent of dry, occasionally dark humour. The tone is light even when the plot is gritty, which makes it very engaging and difficult to put down. The protagonist is witty, amusing and occasionally outrageous, and his insights and narrative voice are always entertaining (although sometimes he appears to get so caught up in his own witticisms that he forgets to tell the story). The fact that he has Snorri to bounce off (sometimes literally) helps to highlight his personality even further, and the juxtaposition of the two opposing characters works really well.

Those who found Lawrence’s Broken Empire trilogy too dark and its main character unsympathetic may have more luck here. Jalan Kendeth is certainly no Jorg Ancrath, despite the similar-sounding names. True, they’re both royal princes, they both leave their homelands to go on adventures, and neither of them care very much about anyone except themselves, at least at first. However, while Jorg is a somewhat sociopathic, homicidal teen with aspirations to rule an empire, Jalan is a self-professed coward, a twenty-something womaniser and gambler who just wants to spend his time enjoying the finer things in life. His internal monologue, in which he continually whinges and whines and ruminates on the wisdom of running away in every possible situation, is refreshingly different to Jorg’s no-nonsense goal-centred character, although I personally find both very entertaining in their own way.

One of my favourite aspects of the Broken Empire series were the references to the ‘Builders’ world, and the irony created by characters’ ignorant observations and assumptions about the things left behind from this world. I was pleased to see this continue in Prince of Fools with many more humorous comments, such as the legend of the train (which Jal thinks must have been a “fearsome beast” to have been able to plough through the side of a mountain), Skilfar’s “plasteek guardians”, and – my personal favourite – a Viking longship named Ikea.

Unlike the Broken Empire, there are no confusing time hops in Prince of Fools. Aside from the occasional memory, and Jalan’s gradual telling of Snorri’s tale, the entire story is focused solely on events occurring over several weeks, and from the perspective of one single character. This makes it easier to see how the main character develops during the course of the story, and demonstrates the author’s ability to subtly build character without resorting to flashbacks and time-jumps. I will say that I was a little disappointed with how the development seems to reverse again by the end of the novel, but hopefully more will be revealed in the second book.

(Review originally posted over at halfstrungharp.com on 3rd July 2014.)

The Red Queen is old but the kings of the Broken Empire dread her like no other. For all her reign, she has fought the long war, contested in secret, against the powers that stand behind nations, for higher stakes than land or gold. Her greatest weapon is The Silent Sister—unseen by most and unspoken of by all.

The Red Queen’s grandson, Prince Jalan Kendeth—drinker, gambler, seducer of women—is one who can see The Silent Sister. Tenth in line for the throne and content with his role as a minor royal, he pretends that the hideous crone is not there. But war is coming. Witnesses claim an undead army is on the march, and the Red Queen has called on her family to defend the realm. Jal thinks it’s all a rumor—nothing that will affect him—but he is wrong.

After escaping a death trap set by the Silent Sister, Jal finds his fate magically intertwined with a fierce Norse warrior. As the two undertake a journey across the Empire to undo the spell, encountering grave dangers, willing women, and an upstart prince named Jorg Ancrath along the way, Jalan gradually catches a glimmer of the truth: he and the Norseman are but pieces in a game, part of a series of moves in the long war—and the Red Queen controls the board.