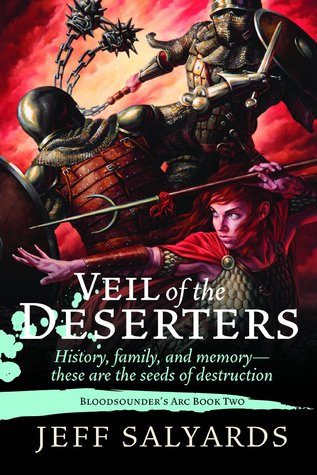 You’ll be pleased to know that I’m not here to bore you with generalised, hyperbolic gushing about how much I’m loving the world of Jeff Salyards’ Bloodsounder’s Arc (I waffled on enough in my review of book one, ‘Scourge of the Betrayer’).

No, what I’m actually here to do is bore you with specific, hyperbolic gushing* about how much I’m bloody loving this series.

(*Disclaimer: fangirlish gushing is an inadvertent and unavoidable side effect of reading this author’s work.)

‘Veil of the Deserters’ picks right up where ‘Scourge’ left off, whirling us off our feet and right back into the story with even less fucking around than a typical episode of 24. Injuries that were inflicted in the first book are still causing problems (broken ribs don’t heal overnight, y’know) as Arki’s tale continues to unfold in ‘real time’ using the same focused PoV and slow-build structure that had such a Marmite effect on many readers of book one. Personally, I think it’s brilliant . . . but there’s no accounting for taste.

Luckily for those who disliked the first book’s narrow approach to worldbuilding, the story’s scope begins to widen dramatically in ‘Veil’; and the writing becomes delightfully evocative to match it. Salyards’ hypnotic prose conjures some truly striking settings and imagery, with vivid and poetic descriptions woven seamlessly into the narrative. The scene that made the biggest impression on me was especially memorable because of its spectacular backdrop; I highlighted certain passages as I was reading, and when I went back to check the notes I’d made I’d annotated these parts with just the words: “fucking gorgeous.”

But since our narrator is accompanying a close-knit group of soldiers on their long, dangerous trek home, it makes sense that a much larger amount of the book is devoted to portraying their interactions with one another. Lucky, then, that Salyards also writes dialogue like a boss. Conversations are witty but natural; there’s biting rejoinders and clever repartee and laugh-out-loud snark and sarcasm a-plenty, but it’s recurring rather than constant and never once does it feel forced.

Dialogue is a vital part of any novel, and more so in one that uses first person. Bloodsounder’s Arc filters our understanding of everything that goes on by showing it to us through the narrow window of Arki’s narrative, which means that the only way we (and Arki) learn about the characters is by observing their interactions. I simply can’t stress enough how skilfully this is accomplished here. Furthermore, each of the more prominent characters speak in ways that are subtly different. Speech tags are a rarity because they are simply not necessary: Mulldoos, Vendurro, Braylar and the rest each have their own voice, and it’s easy to distinguish between them even during group conversations.

When I reviewed ‘Scourge’ I praised Salyards’ skill in creating characters who feel like real people, and he continues to demonstrate that skill throughout ‘Veil’. Familiar faces become both less and more so as the layers obscuring their lives are gradually peeled away; flaws and virtues are laid bare in equal measure as Arki slowly comes to find his own place in the company.

Nowhere is this more apparent than in Arki’s relationship with Braylar, which develops in new and organic – and sometimes surprising – ways. A partnership born of expedience and founded on mutual tolerance begins to grow into something almost approaching friendship, or at the very least grudging respect. One of the more obvious signs of this is that Braylar becomes less vitriolic towards Arki, to the point where his sarcastic mockery sounds almost more affectionate than hostile. In response Arki sheds some of his fearful passivity, and begins to speak and act with initiative and increasing temerity.

Some would argue that dialogue and internal voice dominate the book at the expense of its plot. I would disagree wholeheartedly. Part of this series’ charm is the way it takes its time, draws you in, makes you care without realising, until something happens (preparing an ambush by sunset, perhaps?) and the pages leading up to that moment become unbearably tense, and the blow-by-blow fight scenes even more so.

Combat in Salyards’ world is brutal, exhausting and inglorious. I’ve said before, he writes fight scenes so realistically that they’re almost painful to read. One-handed weapons don’t shear through armour like a hot knife through butter; instead they’re frequently used to bash and pummel a heavily-armoured opponent into submission, which is less gory but far, far more brutal. Arrows are deflected by helms, crossbow bolts do very little damage to those wearing decent armour, and whether or not you manage to shoot your enemy in the face at range is much more dependent on luck than skill.

Most importantly, whenever there is fighting to be had the reader is fully aware that every single character is in danger, regardless of whether or not they’re actively participating. The narrator’s intimate focus on small groups and individual soldiers gives a real sense of immediacy: Salyards basically situates us right there beside Arki, in front-row seats where we can hear the grunts and clashes, feel the blood spray, smell the sweat of the armoured and exhausted combatants as they instinctively struggle to be the last man standing.

It’s not only during combat that we’re immersed in the story right alongside Arki. The first-person perspective ensures that ‘Veil’ remains grounded in realism even during its most fantastical moments; this, for me, is the most defining characteristic of the series. Salyards anchors the reader firmly within his narrator’s world, and in doing so persuades us to share his incredulity, his naivety, his limited experience of what may or may not be possible. And so it is that, when the fantastical does happen, it seems all the more remarkable and real.

It’s so deftly done that we scarcely even notice this subtle process. Right from the start of book one it’s as though our imagination has been slowly lowering its anchor into this world until it finally hit the bottom and lodged there. But it’s not until the events of ‘Veil’, when the narrator’s very definition of the impossible is called into question, that we feel our anchor unexpectedly pulled by these strange tides, and finally realise we’re about as thoroughly embedded in Arki’s world as it’s possible to be.

A fun little offshoot of this is that the author uses his narrator’s ignorance to poke fun at oft-overlooked aspects the genre. For example: at one point Arki reflects on how much maintenance horses require. “I suppose I always imagined you simply rode until you were done riding and then got off,” he muses; and whether or not Salyards intended it this way, there’s no denying that a vast amount of fantasy authors appear to make the same assumption as Arki. I know, I know: the genre’s called ‘fantasy’, it’s not meant to be realistic, etc., etc. Still, the best fantasies are written in such a way that we actually believe in them, even just for a moment. A thoroughly immersive reading experience relies on little touches of credibility, which is why Bloodsounder’s Arc is already one of the most engaging and (dare I say) believable speculative fiction series I’ve encountered.

Even the magic feels real. Wielded only by women, Salyards’ magic is mind-based, clever and unconventional: you’ll find no fireballs or magic missiles here. It’s not flashy in the slightest – which perhaps makes it even more frightening – but it’s still deadly, and it takes its toll on the caster as well as the target. Magic played a relatively small role in ‘Scourge’, and was largely mentioned only in dark muttering and cryptic references. But here we finally get to meet the dread Memoridons, or ‘memory witches’, two of whom accompany our favourite Syldoon and add an intriguing new dynamic to the group.

In fact, one of the Memoridons – Braylar’s sister Soffjian – has already become one of my favourite characters, despite the fact that she doesn’t actually take up a lot of page time. Using the angry, fearful reactions of Braylar and his men, the author makes Soffjian’s presence felt even before the reader meets her, and when she does join the Syldoon her presence in the group affects everything the soldiers say and do. Salyards lets us see just enough of her strength and skill – in interactions both verbal and physical – that we’re left in no doubt about her badass credentials. Salyards also does a rare thing: he manages to write a strong female character – who for the most part is clever and cunning, hostile and aloof, and frankly a bit of a bitch – and make her not only someone we sympathise with but also who we admire.

Well. I do, anyway. In fact, Soffjian is my new hero.

That said . . . fetch me my ranseur, and be quick about it. ‘Ranseur’, yes. You know, the big pointy—eugh, forget the ranseur. Just bring me the next book. ‘Chains of the Heretic’, that’s the one. I’ve heard it’s the best of the bunch!

Well, of course I have high expectations of it, fool. What? ‘What if it doesn’t live up to them?’ Of course it will! And if not, then it’s like Braylar himself says: “even if it proves less than gripping or convincing, it is better than a dead horse.”

History, Family and Memory… these are the seeds of destruction.

Bloodsounder’s Arc continues as Captain Braylar Killcoin and his retinue continue to sow chaos amongst the political elite of Alespell. Braylar is still poisoned by the memories of those slain by his unholy flail Bloodsounder, and attempts to counter this sickness have proven ineffectual.

The Syldoonian Emperor Cynead has solidified his power base in unprecedented ways, and demands loyalty from all operatives. Braylar and company are recalled to the capital to swear fealty. Braylar must decide if he can trust his sister, Soffjian, with the secret that is killing him. She has powerful memory magics that might be able to save him from Bloodsounder’s effects, but she has political allegiances that are not his own. Arki and others in the company try to get Soffjian and Braylar to trust one another, but politics in the capital prove to be far more complicated and dangerous than even Killcoin could predict.

Deposed emperor Thumarr plots to remove the repressive Cynead, and Braylar and his sister Soffjian lie at the heart of his plans. The distance between “favored shadow agent of the emperor” and “exiled traitor” is an unsurprisingly short road. But it is a road filled with blind twists and unexpected turns. Before the journey is over, Arki will chronicle the true intentions of Emperor Cynead and Soffjian. And old enemies in Alespell may prove to be surprising allies in a conflict no one could have foreseen.

You can connect with Jeff via Facebook and Twitter, or  check out jeffsalyards.com for more (his blog on there is ridiculously entertaining).