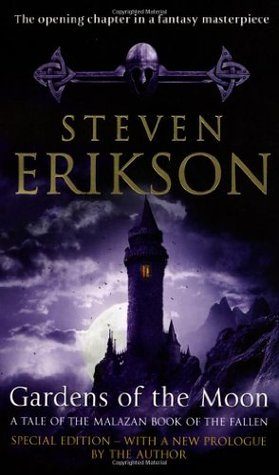 Genre giant Steven Erikson’s Gardens of the Moon is the first in a ten-book series that you will inevitably love and worship. (Or hate and resent.) (Or maybe just give up on before reaching the end of book one.)

The first chapter in the truly epic Malazan Book of the Fallen introduces a hugely diverse and seemingly endless cast of characters: mages and soldiers; humans and not-quite-humans; demon lords and talking ravens; gods and nobodies; heroes and villains and others occupying the grey space in between. There are a great many overlapping storylines – huge-scale campaigns, deadly assassin wars, magical battles, political manoeuvring, covert missions – and not all of them appear to fit together very well (at least at first).

Yes, Gardens of the Moon gives us a LOT to take in, and the first three hundred pages or so are enough to leave any first-time readers as lost and helpless as a puppet with its strings cut. In the prologue to the newer editions Erikson himself states that he refuses to spoon-feed his readers, and finds it insulting and patronising when other writers do the same. His decision to withhold important backstory and omit dreary exposition is a conscious and tactical choice, and he is fully aware that Gardens of the Moon is likely to leave readers floundering.

However, Erikson assumes that those of us who choose to read his work don’t mind floundering a little; don’t mind having to work things out for ourselves, and don’t mind waiting many hours and thousands of pages before the pieces finally begin to fit together. As someone who has read all ten books in this series I can unequivocally state that finally reaching the moment(s) when everything starts to make sense . . . makes ploughing through the confusion at the beginning so worthwhile.

The Malazan series as a whole contains enough ‘ohhhh, so that’s what that was about!’ moments that the rewards of reading well outweigh the challenges. That said, it’s only upon re-reading Gardens of the Moon and the rest that you really begin to appreciate the amount of planning and detail that Erikson has put into this series. There are so many tiny nuances that take on a double meaning, so much of the dialogue that becomes multi-layered, and so many little things that you didn’t notice the first time but are steeped in pathos now that you’re fully aware of the events to follow.

If you haven’t read Gardens of the Moon, my advice to you is ‘read it, but have patience, and be prepared to read more in the series in order to fully appreciate it’. If you have already read it, then go ahead and re-read it right now.

Either way, you can thank me later.

(Review originally posted over at halfstrungharp.com on August 10th 2014)

The vast Malazan Empire simmers with discontent, its subject states bled dry by interminable warfare and clashes with Anomander Rake, Lord of Moon’s Spawn, and the mysterious Tiste Andii. Even the imperial legions, long inured to the bloodshed, yearn for some respite. Yet the Empress’ rule remains absolute, enforced by her dread Claw assassins.

For Sergeant Whiskeyjack and his cynical squad of Bridgeburners, and for Tattersail, sole surviving sorceress of the Second Legion, the aftermath of the siege of Pale should have been a time to heal the still living and mourn the many dead. The Empress has other ideas.

However, it would appear the Empire is not the only player in this great game. A more sinister, shadowbound force is poised to make its first move . . .