Review: ‘Scourge of the Betrayer’ by Jeff Salyards 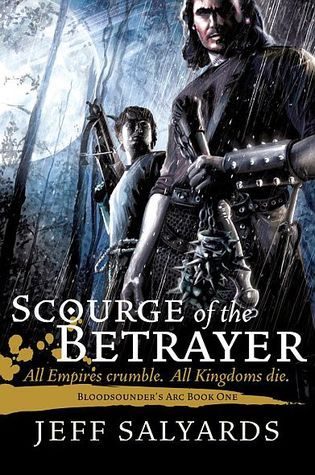 ‘Scourge of the Betrayer’ is a book that’s been lurking amidst the dusty, long-forgotten recesses of my Amazon wishlist for over three years. Now that I’ve finally gotten around to finishing it I’m kicking myself for having waited so long.

It was social media that recently put the series back on my radar: after a few weeks of being regularly entertained by Salyards’ laugh-out-loud Facebook posts I decided it was high time I checked out his fiction.

Imagine my surprise and pleasure when I found myself immersed in a gritty, startlingly intimate fantasy; one that uses realism and detail to draw in the reader, and maintains the engaging and endearing first person voice of a rather inexperienced and anxious young man.

Our narrator is Arkamondos, an educated yet naïve small-town scribe. The main premise of ‘Scourge’ is that Arki has been hired to chronicle the day-to-day activities of a brutal warband. His new comrades hail from the shadowy Syldoon empire; led by Captain Braylar Killcoin, each man in the company comes across as hard-bitten and wholly at ease with violence and death.

What really sets Salyards’ writing apart is its charming and eloquent narrative voice, which captures perfectly the difficulties and doubts of an untested chronicler. Unlike other ‘grimdark’ protagonists, Arki is increasingly horrified by the violent deeds he comes to witness, and frequently questions his decision to join the Syldoon. We the reader get to experience his fear and shock – in complete contrast to the slurry of infallible, unshakeable antiheroes that the last few years have provided us with – and it’s refreshing to have a narrator that we can actually relate to.

Though Arki as a narrator is almost painfully naïve, he doesn’t shy away from observing and recording the brutal things he witnesses. He tries to do this as impassively and professionally as possible, but naturally his own morals and personality colour everything he writes. Arki is mostly left on the outside of the group, at least at first. This means that the reader is also left out, and we begin the story knowing next to nothing about what’s going on: just like Arki, the reader feels as though they’re stumbling around, completely out of their depth. And this is actually awesome – as long as you just sit back and accept the fact that everything will make sense eventually.

Above all, Arki’s lack of worldly experience makes every page feel realistic. Armour, weapons and warcraft are described simply yet effectively; there is an undertone of quiet competence that conveys the sense that the author has done his research but chosen not to show off about it by blinding his readers with pedantic jargon and details. Better yet, Salyards doesn’t assume that every single character possesses the same amazing skillset just because it’s fantasy: not everyone knows how to load a crossbow, ride a horse, pick a lock or even load a wagon. He avoids stereotypes, and by doing so he gives us characters that actually feel like real people.

The author deals with every other aspect of the story in a similar way. Sex is exciting yet ultimately disappointing; combat is prolonged and painful; death is graceless and unexpected. Arrows miss as often as not; ambushes are more likely to fail than succeed; bloodstains actually stick around for a long time; and every fight leaves the combatants with injuries both large and small that aren’t just shaken off and forgotten about. And though Salyards avoids the more ‘traditional’ elements of fantasy – specifically with regards to the somewhat obscure weapons used by certain characters – his combat scenes are never anything less than brutal, realistic and vivid.

For instance, one of the main characters’ chosen weapons is a flail. And not just any old flail, either: this is Bloodsounder, powerful but dangerous, which grants its wielder mysterious knowledge and an advantage over his opponents. Despite this, Bloodsounder is not a whirling tornado of wanton destruction when wielded, nor is its use dramatic or over the top in any way; in fact, the first time we see the flail in extensive action it’s used to gradually bludgeon a soldier to death in a tense, protracted one-on-one fight scene lasting several pages.

I’ve seen plenty of reviews complaining that ‘Scourge’ is light on the action, and that the bulk of the story focuses heavily on the mundane either through word-for-word dialogue, or internal monologue. I’ll admit I agree with this, but only to an extent, since I feel like this is also one of the book’s main strengths. Yes, the pace is slow. Yes, there are extended monologues that could perhaps have been shorter. And yes, some segments can feel slightly repetitive. But all this does is successfully convey a sense of routine, of the daily grind of men who spend every hour of their lives in one another’s company.

The plot progresses incrementally, but steadily. The fact that events are being chronicled in ‘real time’ makes for a relatively slow pace, yes, but it also gives ‘Scourge’ a pervading sense of immediacy and danger. And just because ALL THE THINGZ aren’t happening doesn’t mean that *nothing* is happening. ‘Scourge’ represents the beginning of a journey – and a surprisingly subtle journey at that – of discovery, both for the reader discovering the story and characters, and for Arki discovering that maybe he can cope with whatever the hell he’s gotten into after all.

And besides: the prose is smooth and engaging enough that it’s ridiculously easy to forget that not much is actually happening. Salyards writes with an easy tone and a poetic flourish; in fact, his style reminds me (in different ways) of both Mark Lawrence and Pat Rothfuss. But Salyards’ voice feels more *natural*, somehow; less choreographed wittiness and more self-deprecating observation. That’s not to say it doesn’t contain its share of dark humour and gritty dialogue, though. In fact, at one point I described it to a friend as, “a bit like if ‘Prince of Thorns’ had been narrated by Father Gomst with a sense of humour”.

One last thing I appreciated about ‘Scourge of the Betrayer’ is the fact that the author doesn’t fall into the trap of having Arki explain every tiny detail of a world with which he is already familiar. The setting is mostly vague, simply because it doesn’t need to be anything else but. Enough detail is conveyed for us to vividly picture the scenes taking place, yet not enough so that the world building takes over the story. Salyards takes a similar approach to history and lore: you get the sense that there’s a huge amount of it lurking just beyond reach, but he’s going to make us wait before we earn it.

I’m not saying ‘Scourge’ is perfect. It’s not. There’s nothing major to criticise, but it is kind of rough around the edges in a few minor ways. There are bits and pieces – arguably entire scenes – that could perhaps have been cut without detriment to the story; and as I already mentioned, the pacing can occasionally be an issue. But it’s a very, very good book nonetheless. And as a debut novel? It’s seriously impressive.

So yes, bend me over and call me a fangirl: I’m officially sold on Salyards. Now bring me more Bloodsounder. Now.

Dammit you horsec*nts, I said NOW.

Many tales are told of the Syldoon Empire and its fearsome soldiers, who are known throughout the world for their treachery and atrocities. Some say that the Syldoon eat virgins and babies–or perhaps their own mothers. Arkamondos, a bookish young scribe, suspects that the Syldoon’s dire reputation may have grown in the retelling, but he’s about to find out for himself.

Hired to chronicle the exploits of a band of rugged Syldoon warriors, Arki finds himself both frightened and fascinated by the men’s enigmatic leader, Captain Braylar Killcoin. A secretive, mercurial figure haunted by the memories of those he’s killed with his deadly flail, Braylar has already disposed of at least one impertinent scribe . . . and Arki might be next.
A gripping military fantasy in the tradition of Glen Cook, Scourge of the Betrayer explores the brutal politics of Empire–and the searing impact of violence and dark magic on a man’s soul.

You can connect with Jeff via Facebook and Twitter, or  check out jeffsalyards.com for more (his blog on there is ridiculously entertaining).