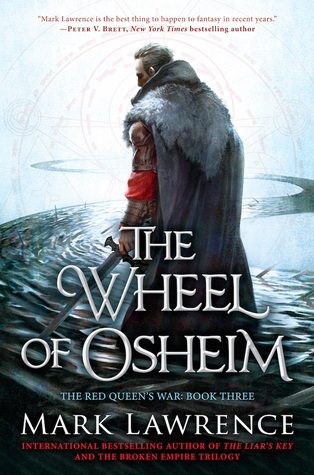 Have you ever wanted to applaud upon reaching the end of the last book in a series – and not because you were glad it was over? In recent years there have been two outstanding books that have made me want to do just that. The first was Emperor of Thorns. The second is The Wheel of Osheim.

Yes: that jammy bastard Mark Lawrence has done it again; and by ‘it’ I mean casually rolled out another stunning conclusion to another fabulous trilogy.

I was lucky enough to win a (signed!) ARC of this book via one of Mark’s many and varied competitions. Incredibly lucky, in fact, since if I’d had to wait another two weeks until the release date I would probably have died.

The Red Queen’s War is the second trilogy set within the sprawling dystopian Broken Empire, a setting I can’t get enough of. The first book, Prince of Fools, saw main character Jal dragged to the ends of the earth. Book two, The Liar’s Key, saw him dragged all the way back again and eventually through a doorway into Hell.

This grandest of finales follows a similar pattern, though the journey is much more rewarding. The Wheel of Osheim finally lets us see the slowly-growing fruits of all that travelling in the form of our protagonist’s subtle transformation. For me, this is the point where Jal finally becomes ‘real’: the things he’s experienced have stripped away much of his shallow persona to finally reveal the potential of the man inside. Everything about him feels more natural: as the story progresses his witticisms become a little wiser, his internal monologues a little less self-conscious, and his actions less self-interested. And as he finally begins to accept the burden of responsibility (however selfish or cowardly the reasoning behind it!) he becomes much, much more sympathetic . . . whilst never completely giving up his old roguish habits.

Jal may not be someone you’d describe as a typical fantasy hero. But at its heart The Wheel of Osheim is essentially an epic fantasy tale – complete with unlikely heroes, overwhelming odds and a quest to save the world – cunningly disguised as an insanely exciting travelogue. The pacing is absolutely spot on: there are so many potential ways this book could have spiralled out of control, but Lawrence keeps things cohesive even when the adrenaline is flowing. He treads the subtle line between fast-paced action and breakneck chaos with even more finesse than usual, making this his most well-balanced work to date.

Another area in which Lawrence consistently demonstrates finesse is in the structure of his novels, and The Wheel of Osheim is no exception. Here, the author cleverly alternates past and present timelines to fill in the gaps since the abrupt ending of The Liar’s Key. He uses the same technique to weave a surprising amount of backstory in amongst the action and intrigue, and in doing so creates a gradually rising tide of pathos and hope that beautifully underscores each individual’s struggle against both good and evil in search of what is right.

Though he seems far too incorrigible to be contained in one trilogy, The Wheel of Osheim is an admirable conclusion to Jal’s saga. Though not as shocking or as visceral as the end of Jorg’s tale, Osheim is somehow more satisfying, tying off each thread with gentle finality – including Snorri’s heartrending tale, woven in and around the main story since book one.

Our protagonists find closure, yes, and although they’ve had to wade through months or even years of sadness to get it not once does the going feel heavy for the reader. The tone remains mostly light and humorous throughout, even when the mood is tense or the subject matter dark. And it hardly even needs to be said that Lawrence’s writing makes every page a pleasure to read: his prose is poetic and flowing, frequently beautiful and never less than engaging. Lawrence is without doubt one of the finest voices in modern fantasy, and The Wheel of Osheim his most outstanding contribution to the genre . . .

All the horrors of Hell stand between Snorri Ver Snagason and the rescue of his family, if indeed the dead can be rescued. For Jalan Kendeth, getting back out alive and with Loki’s key is all that matters. Loki’s creation can open any lock, any door, and it may also be the key to Jalan’s fortune back in the living world.

Jalan plans to return to the three w’s that have been the core of his idle and debauched life: wine, women, and wagering. Fate however has other plans, larger plans. The Wheel of Osheim is turning ever faster, and it will crack the world unless it’s stopped. When the end of all things looms, and there’s nowhere to run, even the worst coward must find new answers. Jalan and Snorri face many dangers, from the corpse hordes of the Dead King to the many mirrors of the Lady Blue, but in the end, fast or slow, the Wheel of Osheim always pulls you back. In the end it’s win or die.