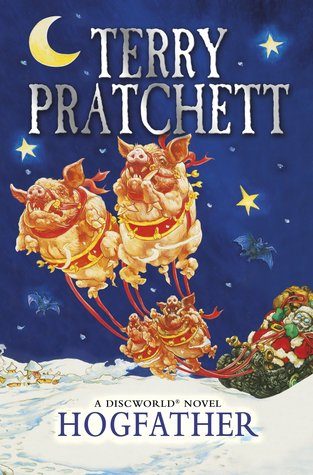 A nasty little letter, hah, yes indeed, and a partridge in a pear tree—’

Of the quarter or so of the Discworld I’ve explored, Hogfather is my favourite. Vadim Jean’s TV adaptation is superb: I watch it religiously every Christmas, struck each time by

just how much of it – dialogue, stage directions, settings, narration, everything – is lifted directly from the source material. This should tell you much about the quality of the book itself, for rare indeed is an original story ‘adapted’ for the screen with so few alterations.

For me, reading Terry Pratchett’s work is not only a joy but an indulgence, too. Sir Terry is one of my major influences. Those books of his I’ve read, I’ve re-read again and again, taking the time to savour the deliciousness of the prose, the wryness of tone, the trademark humour that is at once delightful and poignant.

Universally beloved as it may be, the Discworld series is notoriously uneven. However, one of the more consistent aspects of the books is the narrative voice. Pratchett tells his tales using an omniscient narrator, and there’s no doubt that this voice belongs to no character but Pratchett himself.

At the far end of the corridor was one of the very tall, very thin windows. It looked out on to the black gardens. Black bushes, black grass, black trees. Skeletal fish cruising in the black waters of a pool, under black water lilies. There was colour, in a sense, but it was the kind of colour you’d get if you could shine a beam of black through a prism. There were hints of tints, here and there a black you might persuade yourself was a very deep purple or a midnight blue. But it was basically black, under a black sky, because this was the world belonging to Death and that was all there was to it.

The colloquialism of Pratchett’s narrative voice is one of many things that makes the story come alive. More, the chatty – almost confiding – tone is inescapably full of vibrant humanity that makes the reader feel at once complicit and (to an extent) sympathetic with whomever (or whatever) is being described.

The shape of Death was the shape people had created for him, over the centuries. Why bony? Because bones were associated with death. He’d got a scythe because agricultural people could spot a decent metaphor. And he lived in a sombre land because the human imagination would be rather stretched to let him live somewhere nice with flowers. People like Death lived in the human imagination, and got their shape there, too. He wasn’t the only one . . .

Like so many of Pratchett’s novels, Hogfather revolves heavily around the power of imagination. The human mind is a wonderful thing, a tool of creation or one’s own worst enemy. In the Discworld, anything is possible . . .

You see, strange things can happen when our imaginations are permitted to run amok. In Hogfather’s case, a sudden unexpected surplus of spare belief creates all kinds of bizarre possibilities when, in the absence of one huge anthropomorphic personification (think Easter bunny, Father Christmas, Cupid – that sort of thing), springs up lots of little ones. A single moment of spontaneous speculation – about the existence of, say, the Verruca Gnome, or the Eater of Socks, or the Stealer of Pencils – brings even the most bizarre ideas into being with a glingleglingleglingle of tinkling bells.

As you can imagine, chaos ensues. And when Death himself begins acting suspiciously, his adopted granddaughter Susan decides to investigate, assisted by a raven, the Death of Rats . . . and the ever-helpful Oh-God of Hangovers.

Would you be any good in a fight?’

Susan is mortified to find out that, in the absence of the Hogfather, Death has taken it upon himself to get the job done; and that, being somewhat out of touch with the laws of humanity (and physics), his disregard for the ‘rules’ soon causes quite a stir.

The mother took a deep breath. ‘You can’t give her that!’ she screamed. ‘It’s not safe!’

IT’S A SWORD, said the Hogfather. THEY’RE NOT MEANT TO BE SAFE.

‘What if she cuts herself?’

THAT WILL BE AN IMPORTANT LESSON.

Naturally, this leads to all sorts of hilarity. But when Death starts to learn that not everyone can (or should) get what they want for Hogswatch, his new understanding of life leaves him outraged.

IT IS HOGSWATCH, said Death, AND PEOPLE DIE ON THE STREETS. PEOPLE FEAST BEHIND LIGHTED WINDOWS AND OTHER PEOPLE HAVE NO HOMES. IS THIS FAIR?

The irony of Death being the only one to recognise the inequity among the living will not, I imagine, be lost on anyone. This theme is continued throughout the book in the enlightening exchanges between old man Albert and the naïve, uncomprehending Death.

Meanwhile, in the streets below, a nefarious plot unfolds among a group of criminal masterminds . . .

The other men looked at Medium Dave. He was known to Ankh-Morpork’s professional underclass as a thoughtful, patient man, and considered something of an intellectual because some of his tattoos were spelled right.

Medium Dave; Banjo Lilywhite; Mr Brown the locksmith; Chickenwire; Catseye; and Mr Sideney the wizard (he’s incognito!): a rough bunch for sure. But all pale in comparison with their employer, the terrifying Mister Teatime.

Mister Teatime (it’s pronounced teh-ah-tahm-eh) is, of course, an Assassin (the capital letter is important). With his unnerving glass eye and his penchant for unwarranted brutality, Teatime has surprisingly few friends . . . though, on the other hand, he doesn’t seem to have any enemies at all.

‘I know people say I’d kill them as soon as look at them,’ whispered Teatime. ‘And in fact I’d much rather kill you than look at you.’

Teatime’s twisted ambitions and childlike cruelty threaten to jeopardise all of Death’s hard work; but Pratchett’s brilliant narrative voice brings out the humanity in everyone (and every thing), and coaxes out sympathy for even the most despicable of characters in the smallest and unlikeliest ways.

Mister Teatime had a truly brilliant mind, but it was brilliant like a fractured mirror, all marvellous facets and rainbows but, ultimately, also something that was broken.

When the narrator’s voice takes over, it fluctuates between wry observation and sad, frank, simple statements. Quite often, these contrast with the way his characters view things, which leaves the reader somewhat conflicted.

Teatime was OK. True, after a few minutes talking to him your eyes began to water and you felt you needed to scrub your skin even on the inside, but no one was perfect, were they?

An omniscient narrative voice – especially one that addresses the reader directly – can easily come across as pretentious; not so with Pratchett. A continual undercurrent of irreverence keeps the story relatable, rising frequently to the surface as bizarre juxtaposition and hilarious bathos with the intention of reversing conventions and shattering tropes.

Between every rational moment were a billion irrational ones. Somewhere behind the hours there was a place where the Hogfather rode, the tooth fairies climbed their ladders, Jack Frost drew his pictures, the Soul Cake Duck laid her chocolate eggs. In the endless spaces between the clumsy seconds Death moved like a witch dancing through raindrops, never getting wet.

Poeticism aside, Pratchett weaves a captivating tale without ever sacrificing that down-to-earth British humour that is so integral to the Discworld, and which makes everything somehow less and more grand simultaneously. Whether it’s the ageing wizards not allowed new pencils without presenting the stubs of the old ones, or Death eating a biscuit, or the Tooth Fairy lamenting the fact that she has to pay for her own tooth-collecting equipment – little things like that make them more relatable, more realistic, and thus, more real.

He raised his hands, and seemed to grow. Light flared in his eye sockets. When he spoke next, avalanches fell in the mountains. HAVE YOU BEEN NAUGHTY . . . OR NICE?

At first glance, Hogfather is a silly story; a fantastical take on our own seasonal traditions. But it’s also a subtle expose of the ridiculousness of real life – which, as we know, is often stranger (and far more ridiculous) than fiction. Beneath every laugh-out-loud pun (or ‘pune’) and slapstick scenario lies a point waiting to be driven home to the reader; and if anyone knows how to drive a point home, it’s Sir Terry.

Pratchett delivers his message like the conductor of an orchestra. Fully in control, he uses words to nudge and guide and pluck our humours, finally wielding the moral in a hammering crescendo and striking deep some profound insight about humanity.

The omnipotent eyesight of various supernatural entities is often remarked upon. It is said they can see the fall of every sparrow. And this may be true. But there is only one who is always there when it hits the ground.

The author’s message is hidden in plain sight, like the ubiquitous floating logs in cartoons that you only realise are crocodiles when you’re already standing on them (and by which point, you’re screwed). Witty, sharp and achingly simple – Pratchett’s genius lies in his ability to seamlessly blend moments of fragile beauty with piss-yourself-laughing comedy. What’s *not* to love about his unique Christmas story?

This review originally appeared on Fantasy-Faction on 23rd December 2016.