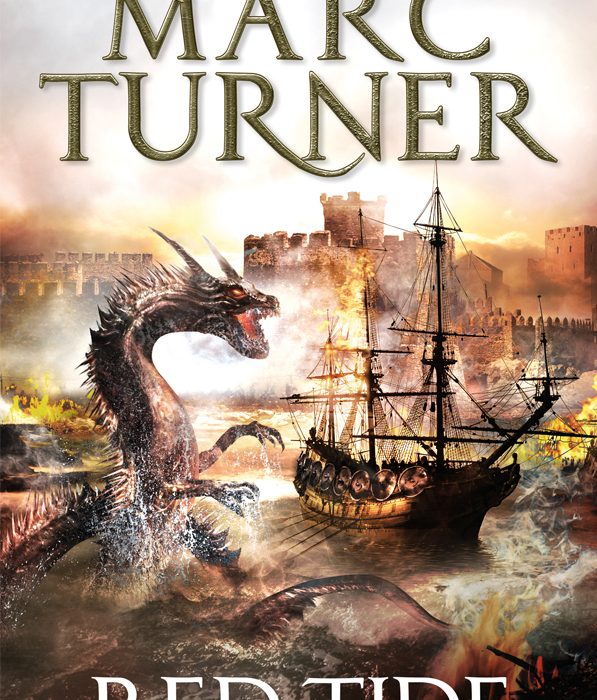 Marc Turner is without doubt one of the most talented fantasy authors to have debuted in recent years. His latest offering, Red Tide, is the thrilling third chapter in the six-book Chronicles of the Exile, and is guaranteed to leave fans of this series absolutely blown away.

Red Tide begins just days after the events of book two (Dragon Hunters). The Sabian Sea is too dangerous to sail, and the Storm Isles are floundering in the chaotic aftermath of Dragon Day. But one city’s misfortune can easily become another’s gain, and it’s clear that the opportunistic rulers on both sides of the Dragon Gate intend to take advantage of the situation . . . if only to fight each other for the scraps.

Right from the outset Turner presents us with greed, murder and betrayal . . . in other words, everything you’d expect from a civilisation founded on greed, murder and betrayal. We catch our first glorious glimpse of the Rubyholt Isles: a notorious conglomeration of pirate communities, tenuously led by a greedy, murderous and treacherous Warlord. Within just a few pages Turner manages to introduce not only a brand-new, Viking-like culture, but also two compelling new PoV characters – both of whom are on opposite sides of a tense and unprecedented political conflict. Needless to say the conflict soon escalates, whisking us away to the city of Gilgamar and the schemes of Emperor Avallon and Emira Mazana Creed. Readers should expect to see some familiar faces from Dragon Hunters, as well as other (possibly half-forgotten!) ones from When the Heavens Fall (book one).

Perhaps the most notable thing about Turner’s writing is his versatility. The Chronicles of the Exile boasts a wonderful variety of styles, scopes, characters and tones, which makes each successive instalment feel strikingly different from the last. This gives it quite an experimental feel – particularly since the first two books not only feature entirely different characters and settings but also seemingly-unrelated plots – which is refreshing rather than disorienting. The complex, sweeping epic of When the Heavens Fall is vastly different from its sequel, Dragon Hunters, which is set entirely on and around the island city of Olaire and is written with a much lighter tone.

Red Tide has more in common with the latter than the former, continuing the nautical theme and returning once more to the southern coast of the Sabian sea. Most importantly (particularly for those who were bewildered by their seeming lack of connection) Red Tide draws together some of the disparate elements of the first two books. He does this gradually and subtly, which I guarantee will lead to more than one ‘ah-ha!’ moment (or, if you’re anything like me, a flickering lightbulb moment of slow-dawning realisation).

Turner pulls each separate character steadily and irrevocably into the central conflict, then flings obstacles at them whilst also pushing them irresistibly towards one another. In contrast to the masterful slow-build of When the Heavens Fall, Red Tide is far more fast-paced: the tone is lively, and the action is consistently gripping. Best of all, Turner doesn’t exploit every single potential combination of characters. Instead, he teases us with near-meets, creating ‘what if?’ scenarios and then holding them tantalisingly out of reach.

Personally, one of my favourite aspects of Red Tide – and of the entire series – is the way the author conveys the sheer scope of his world without ever going overboard (see what I did there?) with the details. He uses brief conversations, cryptic naming traditions, local legends and stunning scenery to hint at a vast backdrop of unknown elements. In Red Tide, the focus lies on what lurks under the sea: readers can look forward to terrifying glances of The Rent (a vertigo-inducing black hole beneath the waves), the Dragons’ Boneyard (along with its chthonic web-spinning denizen) and of course the deadly coming-of-age trial known only as the Shark Run. Turner gives us the impression that a vast amount of history and lore is straining to just burst into the story and cause untold chaos. Most impressive is his ability to do this without deviating from the main plot whilst also (conversely) raising more questions than he answers.

Why should you pick up this series? Well, if I haven’t managed to convince you how effing fantastic the latest release is, just take a look at the reviews for books one and two. You’ll find a lot of favourable comparisons to other authors in the genre – and it’s easy to see why.

For a start, When the Heavens Fall is threatened by the presence of immortal, crazy-powerful supernatural beings. Turner’s descriptions of these – understated, yet chilling – strongly bring to mind the Taken in Glen Cook’s Black Company. Then in Dragon Hunters the author entertains us with the sort of quirky, rock-hard, dark-humoured characters you’d expect to find dwelling in Steven Erikson’s Malazan series.

Red Tide brings the best of both. Furthermore, the Abercrombie-esque diversity of the characters – be it Amerel’s unforgiving pragmatism or Romany’s sardonic humour; Senar’s wry indecision or Galantas’s arrogant charm – ensures that every PoV has its own way of entertaining the reader (incidentally making it very difficult for the reader to choose who to root for!).

“What was she thinking? This couldn’t be murder; this was war. Killing wasn’t murder if you stole the victim’s country while you were at it.”

So, if you enjoy the novels of Glen Cook, Joe Abercrombie and Steven Erikson, chances are you’ll love Marc Turner’s stuff. But though the series does have plenty in common with First Law, Malazan, Black Company and others, the world Turner has created in The Chronicles of the Exile is deep, unique and entirely his own. Turner’s star is on the rise: Red Tide is his strongest outing to date, and one of the finest fantasy novels of 2016.

If you’re still undecided about starting the series, you can read a Chronicles of the Exile short story for FREE over on Tor.com.

This review was originally published at Fantasy-Faction.com on 19th September 2016.