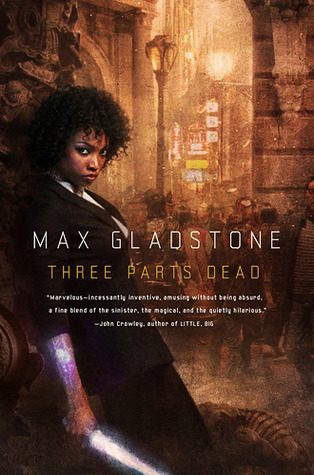 I’m going to begin my review of Three Parts Dead by including the official blurb (which does a much better job of summarising this quirky, unique novel’s premise than I ever could):

A god has died, and it’s up to Tara, first-year associate in the international necromantic firm of Kelethres, Albrecht, and Ao, to bring Him back to life before His city falls apart.

Her client is Kos, recently deceased fire god of the city of Alt Coulumb. Without Him, the metropolis’s steam generators will shut down, its trains will cease running, and its four million citizens will riot.

Tara’s job: resurrect Kos before chaos sets in. Her only help: Abelard, a chain-smoking priest of the dead god, who’s having an understandable crisis of faith.

When Tara and Abelard discover that Kos was murdered, they have to make a case in Alt Coulumb’s courts—and their quest for the truth endangers their partnership, their lives, and Alt Coulumb’s slim hope of survival.

I was a bit unsure going into this one, as many reviews I’d read about Three Parts Dead contained phrases like “acquired taste” and “you’ll either love it or hate it”. I actually neither loved nor hated it, but found it to be a fun read full of interesting twists.

Gladstone’s world is fresh, original and dark; a steampunk-inspired blend of gods and magic and technology. The majority of this book is set in the city of Alt Coulumb, ruled by the fire god Kos Everburning and the former goddess of Justice. But the city’s equilibrium is threatened early on when Kos dies under mysterious circumstances. It’s further imperiled by the return of the reviled ‘Stone Men’ of legend, aka. gargoyles.  (A particularly striking concept conjured by Gladstone is of Justice’s servants: an army of peacekeepers who, when on duty, can call upon Her power and transform themselves into the indestructible  – and terrifyingly automaton-like – Blacksuits.)

Three Parts Dead follows Tara Abernathy (a newly-graduated Craftswoman) as she is recruited to a necromantic law firm by one of its partners; she then travels to Alt Coulumb, begins a series of dangerous investigations, is acquainted with new allies and old enemies, and finally reaches the unexpected climax of the bizarre ‘legal’ case. Believe it or not, the main part of the story takes place over the course of a single day and night, and the series of events is pretty thrilling, despite the heavy focus on law.

There are four main POV characters: Tara, of course; the ancient and mysterious Ms. Kevarian; Cat, a Blacksuit; and Abelard the novice priest. Each has their own agenda and their own perspective on the case, and the author uses the shifting POVs to good effect, alternately keeping us in suspense and building momentum. However, the pacing remains fairly slow and steady throughout. The good thing about this is that there’s hardly ever a dull moment; the less good thing is that there are no real ‘high’ points until the end, and even the climax doesn’t quite feel as, well, climactic as it perhaps should. I also felt that there were a couple of things that served simply as convenient plot points (such as Raz Pelham: dandy vampire) but I’m probably just nitpicking.

The world of Three Parts Dead is built really well, and we’re drip-fed bits of information relating to its history without ever being overwhelmed by it. Even better, there are tantalising mentions of other parts of the world which are never properly explained, and some of which we never actually see, such as the scorpionkind, the sea serpents, the Deathless Kings, the wastelands of Gleb, and the Hidden Schools. It makes the author’s fictional world seem bigger and more real, despite the fact that we only ever really see one city, and also gives the impression that further books in the series will (hopefully) finally allow us to see these things.