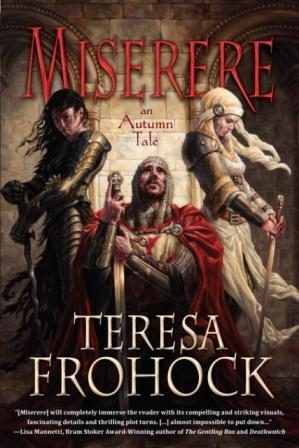 Miserere is a strange one. The premise is interesting: in addition to Heaven, Hell and Earth, Frohock’s universe also a fictional dimension called Woerld, which acts as a sort of barrier between Hell and Earth. In Woerld, all of Earth’s established religions work together in harmony to prevent the rise of the Fallen, and Templar-esque holy warriors known as Katharoi help in the ongoing fight against evil.

Woerld exists outside of space and time: Miserere is set on Woerld in the year 5873, when a portal opens up and Lindsay,(a girl from present-day America) is dragged through into Woerld. In fact, this is how many of the Katharoi are brought into being: worthy individuals, always children, are chosen to make the one-way trip to Woerld to become Katharoi, leaving their own lives behind forever.

Lindsay is to be the ‘Foundling’ (Padawan) of Lucian, one of the main protagonists, and a large part of Miserere is centred around their relationship. Interestingly, rather than write the story from Lindsay’s point of view in the manner of so many other ‘fish out of water’ or ‘farmboy’ tales, Frohock more or less chooses to maintain the adult PoVs throughout. I think this was the right decision, as it still gives opportunity for explaining the world to someone who is unfamiliar, but it’s less patronising since we’re sharing the PoV of the person who knows rather than the person who is ignorant. A lot of the things Lindsay is forced to witness and experience are fairly dark and unpleasant, and as such the chapters from the child’s PoV can be a little jarring and uncomfortable – which is most likely the author’s intended effect.

The novel features some pretty heavy genre bending, and as such it’s a bit disorienting at first – especially when the author casually tosses around references to the world we live in (such as the way mobile phones can be used on Woerld for a short time before being corrupted by demons and used as Hell portals). Miserere combines elements of urban and traditional fantasy, as well as SF; the presence of holy warriors and Inquisitors give it the feel of historical fiction, while the setting implies that it’s actually a dystopian novel; and the sheer amount of religious imagery (not to mention to plot and the setting) give it a distinctly biblical feel.

I’m in no way religious, and so I imagine there’s a huge amount of religious nuance that was completely lost on me. I’m also unsure of how much of the imagery in the story is taken from the bible and how much has sprung from the author’s imagination, but whichever it is, the vivid imagery is one of the novel’s strongest points. The Sacra Rosa, a rose bush that circles an entire city and wreaks Triffid-style destruction on the Fallen, was one of my favourite images. I also particularly enjoyed the brief flashes we’re given of the Hellscape, and the Simulacrum is also a pretty creepy image. The author skilfully draws on religions and legends from all over the world and brings them all together, and I recognised enough for it to give the book a sense of real authenticity.

One thing that did disappoint me was the ending, which was far less climactic than I expected. A large proportion of the book felt like it was setting up the ‘good vs evil’ battle implied in the blurb: but there are long sections where not much actually happens, and the payoff for going through this wasn’t all that that rewarding. I did get the sense (I hope) that there will be another book about Catarina’s retribution, so perhaps that will have the epic conclusion I was expecting from this one.

Regardless of the book’s flat moments and slightly weak ending, the characters were strong enough to keep me interested throughout. Rachael in particular is an awesome character: she is a holy warrior and a Judge who was abandoned in Hell by the man she loved, and returned possessed by a Wyrm. She’s a strong, believable character who has her own important role in the story, rather than just functioning as the ‘main’ character’s love interest.

Although the blurb of Miserere makes it sound like a love story in a fantasy setting, it’s far from conventional. I was very unsure when I first began to read it – and it probably didn’t help that I read it in fits and starts over the course of a week – but it grew on me a lot, and once I reached the end I was very keen to read more by this author.

This review originally appeared on halfstrungharp.com on 9th September 2014.