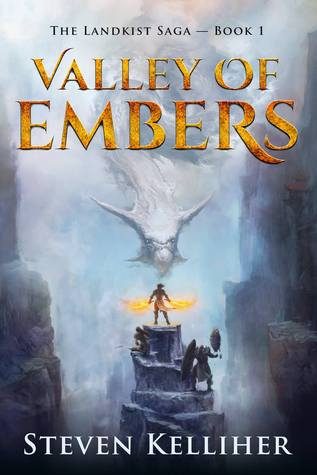 “Tough to be young or old in this Valley of ours.”

The night is dark and full of terrors, especially for the besieged inhabitants of the Valley of Embers. In Steven Kelliher’s secondary world only a handful of walled towns remain as the last bastions against the night, and the dwindling population of Emberfolk struggle to defend their secluded homes from the Dark Kind.

Fellow Factioners may have noticed that we’re currently participating in a little thing called the Self-Published Fantasy Blog-Off. Here’s an important thing I’ve learned from judging: there are a LOT of self-published fantasy authors clamouring for attention. So many, in fact, that it’s hard to distinguish between those that deserve further notice and those who don’t. With this in mind, even the smallest flaws can turn out to be deal breakers in our decisions about which ones to continue reading; and we’ve found ourselves taking into consideration elements that we probably wouldn’t glance twice at in a traditionally-published work.

Is it unfair that indie authors have to work harder than others to earn our regard? Certainly. After all, there are a huge number of self-published individuals who take their craft very seriously, investing time and money to produce a professional final product. But the truth is that for every one of these, there are a hundred others who’ve cut corners. Many first-time authors rush into things, publishing an early draft without bothering with beta reads or edits. Others forego the services of a decent cover designer or even a less-decent one. And then there are those who splash out with amazing cover art in the hope that it will compensate for a shoddily-formatted, poorly-written or uninspired story.

Looking at Valley of Embers, you’ll forgive me for initially suspecting the latter. I mean,

just look at that cover. Look! Can you blame me for being a bit wary? Looks too good to be true, right?

Wrong! In addition to its impressive and lovingly-commissioned artwork, Valley of Embers boasts an attractive and professional design both inside and out. Appearances really do matter, and in terms of superficial features Kelliher has really knocked it out of the park. The story itself is slightly less spectacular, but is engaging and original nonetheless.

The underlying threat of dark creatures that only attack at night is strongly reminiscent of Peter V. Brett’s Demon Cycle. However, unlike Brett’s post-apocalyptic world, Kelliher’s Dark Kind are a relatively new phenomenon; and there are some townsfolk who remember the times before the monsters showed up.

An exciting premise, for sure. Kelliher makes the most of it by giving us a taste of combat on the walls right at the beginning, introducing us to protagonists Kole and Linn through their skill and familiarity with night-time battle. This straight-to-the-point introduction works well on the whole. But the quickly-escalating battle and the cryptic-but-hurried discussions that follow seemed (to me, at least) kind of stop-start. This may be entirely down to personal preference. In fact, I expect that plenty of readers will be enamoured with such a whirlwind opening. And why not? Kelliher’s action scenes are great (if occasionally confusing), his settings vivid and varied and his characters likeable.

True, the action is well-described. But for me the combatants are a little too blasé about the nature of the enemy: perhaps it’s the coward in me speaking, but I would expect to see a certain amount of terror in the defenders regardless of how accustomed they are to their daily nightmare.

Furthermore, what begins as a fast-paced and intriguing story gradually becomes somewhat uneven, and overall the pacing is a little ‘off’. Key events lack impetus due to too much or too little build-up. One or two major battles outstay their welcome; and more than a few exposition-heavy scenes could probably have been cut without detriment to the story. (In fact, some of the dialogue actually obscures rather than explains: the swapping out of noun phrases – Dark Kind, Eastern Dark, Sage, Sentinels, Night Lord, White Crest – is often confusing, and the characters’ conversations about the Valley’s history tend to involve as much repetition as they do clarification.)

If that seems like a whole lot of negative – well, welcome to the brutal world of self-publishing, where little gripes become big gripes precisely because traditionally-published novels have taught us to take their absence for granted. Don’t get me wrong: not once did I feel less than compelled to keep reading. But in many instances I was keen to read on because of my interest in the story rather than the specific scene in front of me. Most of the pacing issues would likely be fixed if exposed to an editor’s stern attention, as would the occasional homophonic typo, odd description or anachronistic simile.

If there’s anything the SPFBO has taught us it is that the more successful indie authors are those who have taken their reviewers’ criticism on board and used it to improve their craft. Standards are high. The writers who constantly strive to meet – and to exceed – those standards are the writers who eventually get noticed one way or another; while those who settle for second best will inevitably linger in perpetual obscurity. Having read Valley of Embers, Kelliher strikes me as one of the few with the potential to rise to the top; and while it’s evident that there is still room for improvement, so too is the fact that we have a talented new fantasy writer on the scene.

In spite of my whining I am very much invested in the story Kelliher has begun. Though not without flaws, Valley of Embers is a solid debut and a promising start to a new series.