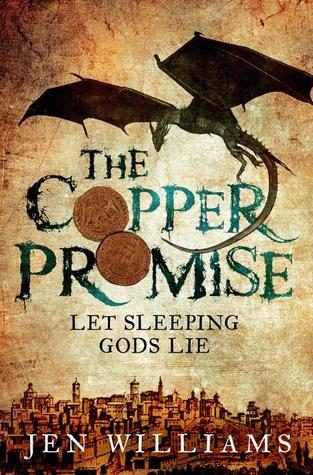 The Copper Promise is a classic fantasy romp; a sword and sorcery tale of epic quests, fallen heroes, plucky sellswords and fearsome dragons.

After unwittingly unleashing an ancient horror from a buried citadel (oops!), three unlikely heroes – noble Lord Frith (whose family were murdered and who himself was tortured after being overthrown by rivals); Sir Sebastien (an exiled knight with a troubled soul); and Wydrin (a sassy mercenary also known as the Copper Cat) – must seek out long-lost magic in order to atone for their bloody daft mistake and save the world.

Jen Williams’ story is a lot of fun. The Copper Promise is full of action and magic and just the right amount of grit and gore . . . and it’s entertaining enough to make you overlook certain instances of deus ex machina (need to travel somewhere in a hurry? Take these magical flying griffins!). Although several threads of the story are so contrived as to be reminiscent of quests in a Dungeons & Dragons game, the flighty pace and likeable characters (particularly Wydrin) make the reader more than happy to turn a blind eye.

The pacing of The Copper Promise does suffer a little bit from its uneven structure. As I understand it, the story was originally written as a series of four novellas; this version of the book is similarly split into four distinct sections. While this means for quite fast pacing and lots of exciting moments and mini-climaxes, it does make the final events of the book seem a little anti-climactic. (The wild chase through the skies, though very exciting, felt a little rushed.)

Most of all, though, it’s nice to read the first book in a series that can actually be read as a standalone. Far too many fantasy authors recently have cut me up with sudden and dramatic cliffhangers at the end of their books (I’m looking at you, Brian McClellan). The Copper Promise is refreshing in that it’s self-contained, and ends with a sense of resolution while at the same time inviting (rather than demanding) a sequel.

I’m currently reading Jen Williams’ latest novel, The Ninth Rain, and am massively impressed by the increase in quality. While I did enjoy The Copper Promise, I think I’d find it hard to return to the Copper Cat and co. now that I’ve sampled the Winnowing Flame trilogy… but who knows? The Iron Ghost has been sitting on my shelf for two years now, and perhaps its patience will be rewarded one day. Either way, a review of The Ninth Rain (released on 23 February 2017) will be appearing on this site very soon!