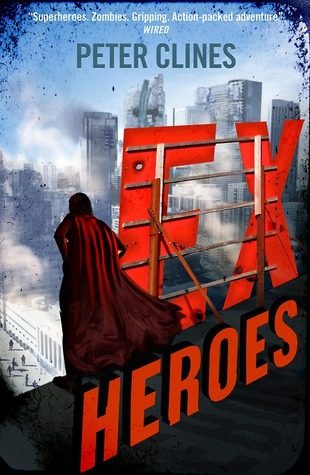 There really isn’t that much to say about Peter Clines’ Ex-Heroes other than that it’s full of zombies, superheroes and fun. (Think X-Men meets The Walking Dead.)

They were superheroes fighting to make Los Angeles a better place.

Then the plague of living death spread. Billions died, civilization fell, and the City of Angels was left a desolate zombie wasteland.

But the ex-humans aren’t the only threats the heroes face. Another group is amassing power . . . led by an enemy with the most terrifying ability of all.

In a post-apocalyptic future where the majority of the world’s population are zombies – or ‘ex-humans’ – a small community struggle to survive in their makeshift ‘town’ (a converted film studio in Los Angeles). Beset from all sides by millions of ‘exes’ and the remnants of a mean LA gang called the SS, the survivors are almost wholly dependent on the help of a group of superheroes.

St. George can fly and breathe fire. Gorgon can drain the strength from his opponents just by making eye contact. Stealth is a super-fast ninja who can blend with her surroundings. Cerberus has a kick-ass metal suit with cannons loaded onto the arms, and Regenerator can heal both himself and others with a touch. (They’re basically the Avengers, but somehow cooler.) The heroes have to work together to protect the survivors against a new threat: someone is co-ordinating the ex-humans, giving minds to the mindless and making them more dangerous than ever. And this mysterious someone has a personal grudge against one of our heroes . . .

I honestly can’t remember the last time I had this much fun reading a book. The heroes are all hugely likeable – my personal favourites were Gorgon, Zzzap, and of course St. George – and there’s a great blend of excitement, humour, horror and pathos. The action scenes are frequent and imaginative, and the author manages to strike a perfect balance between ridiculous and brilliant when it comes to the exaggerated powers of the superheroes. Just awesome.

This review was originally posted on halfstrungharp.com on 19th April 2014.