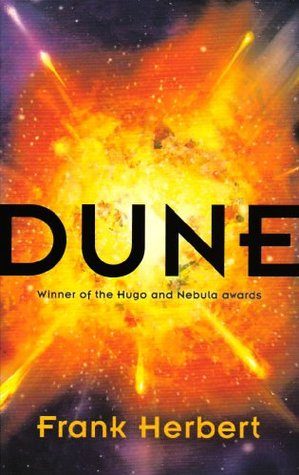 I know everyone raves about this book… but for me, Dune was a mixed bag. On one hand, I enjoyed the desert setting, the fantasy elements, and the entire premise of the thing. On the other hand, I didn’t really relate to any of the characters, and a large portion of the book felt like something of a chore to read… which, let’s face it, is never a good sign.

But first: the positives.

I actually loved the beginning of the book, and quite quickly found myself warming to the main characters Jessica, Paul and Leto. Furthermore, the mythos – the gom jabbar and the Bene Gesserit and the Kwisatz Hadderach – intrigued me. I liked how I was thrown in at the deep end, and that the author was clearly intending to reveal things gradually rather than just explain it all straight away.

Then again, I did feel there was too much exposition at this point, and that dialogue was being used a little too much to try and convey some of the background; I felt like the characters were unnecessarily talking about things for the sake of the reader. And the mysterious things that started out so intriguing? They actually got quite annoying the more the book progressed. I got the sense that I was being excluded from something, and while this doesn’t always bother me (it’s pretty much one of the hallmarks of Steven Erikson’s Malazan Book of the Fallen, aka. my favourite fantasy series of all time) it really started the get on my nerves here, to the point where I’d grind my teeth any time the words ‘Bene Gesserit’ or ‘prescience’ were mentioned. And I no longer give even the smallest of flying fucks about the Kwisatz Hadderach.

Anyway. I enjoyed the beginning of the book for the sense of total upheaval it conveyed; how the protagonists were literally transported from one world to another within a matter of pages, and that this new world was totally alien and hostile. One of my favourite scenes in the whole book happens around this point: Leto, the ‘thopter, the sandworm, the spice factory, the daring rescue . . . I LOVED this epic scene.

But it all went downhill from there – beginning with the main character apparently undergoing some sort of off-page lobotomy. Alright, I (kind of) get why Paul doesn’t have much personality; but it still makes for an incredibly unsympathetic protagonist. And I think in some ways all of the characters suffered from this: I felt like I was watching them do things, but I was ignorant as to why they were doing them. This disconnect made me less invested in the story as a whole.

I was pretty interested in the Harkonnens. However, they could have been fleshed out a LOT more – particularly the Baron, who is a rather disappointing villain: two-dimensional and defined only by his greed and his homosexuality (which is presented very negatively in this instance, and is yet another aspect of the story to dislike with vehemence). I would’ve liked to learn more of the feud between the Atreides and the Harkonnens, and instead felt that the scenes with the Baron ad Feyd-Rautha were a little shallow and irrelevant.

Despite all my gripes, I did enjoy Dune; just not as much as I’d hoped. I kept waiting for it to turn into something spectacular, and for some reason I never felt it really delivered everything it could have done. The only aspect at which it excelled (or so I feel) is the setting. The author paints a very vivid picture of the desert planet (although I did sometimes feel like he didn’t stress enough about how hot and uncomfortable it must be!) and of a population who want to change the ecosystem and create a better world. The concept of having to wear ‘stillsuits’ in the desert also lent an air of realism, being a very practical rather than romantic view of the rebels. And the sandworms are a brilliant invention (although I preferred them at the beginning when they were scary, rather than later when they were just used as glorified donkeys).

To sum up, then: there were plenty of things I liked about Dune, and plenty more that I didn’t. While the characters lacked character and the action lacked action, the fantasy (rather than SF) elements – such as the knife-fights and the sandworms – were excellent. I just wish there had been more of these, and less of the Bene Gesserit bollocks.

Note: the original version of this review was posted on halfstrungharp.com on 5th January 2015.

‘A Darker Shade of Magic’ by V.E. Schwab