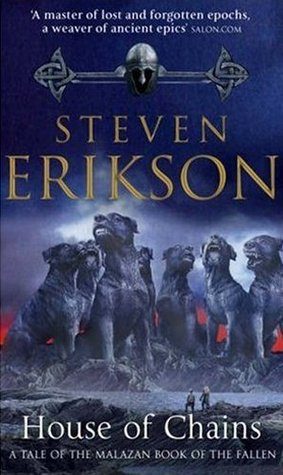 Gardens of the Moon befuddled new readers. Deadhouse Gates made us cry. Memories of Ice left us questioning our own existence. That we’ve made it as far as House of Chains shows our commitment to this series – and WOW does it reward our persistence.

House of Chains (the fourth chapter in Steven Erikson’s incredible Malazan Book of the Fallen) takes us back to the dangerous and rebellious desert continent of Seven Cities, which savvy readers will remember was the setting for Deadhouse Gates. There is a certain poetic symmetry in this, particularly as House of Chains’s main storyline has readers joining a new and untested Malazan army as they retrace the path of those tragic events. That they are quite literally walking in the footsteps of the legendary Coltaine is a perfect metaphor for their struggle to defy all expectations and complete the seemingly impossible task they have been assigned: to defeat the Whirlwind rebellion once and for all.

Thankfully, in spite of the return to familiar territory, House of Chains in no way feels repetitive. Lacking the second book’s undercurrent of tragic inevitability, the focus here is on taking back the control the Malazans lost during the Chain of Dogs. And though the plot is largely focused on the events of the Whirlwind, there are enough references to wider events to make House of Chains feel much more like an instalment of a sweeping epic (in contrast to Deadhouse Gates’s potential as a standalone).

Revelation after revelation increasingly creates the impression that everything within this universe is connected in some way, with Erikson delving deep into the Malazan mythology, plucking primal beings from the dawn of time – such as the Eres’al and the Deragoth – and flinging them headlong into the main events. The depth of worldbuilding shown here is astounding, as is the seamless way in which Erikson interlaces multiple storylines. And although events are not on quite as grand a scale as previous books, House of Chains still conveys an atmosphere of epic grandeur: through the setting, through embedded references to history and ancient mythology, and through the unique and captivating voice that wends its way through this entire series.

Perhaps even more impressive than his staggeringly ambitious storytelling is the fact that Erikson never loses sight of what really brings this series to life: the enormous cast of diverse and unforgettable characters. In addition to revisiting a few old favourites – cynical Sergeant Strings, deadly assassin Kalam Mekhar, and of course that diabolical and insane High Priest of Shadow Iskaral Pust – House of Chains also introduces several staple characters of future books, such as Tavore’s Fourteenth Army, the exiled yet noble warrior Trull Sengar, and the undead outcast Onrack the Broken, not to mention one of the best characters of the entire series: the mighty Karsa Orlong.

Erikson’s characters are, as always, fantastically well-written, incredibly varied but also believable. I personally really enjoyed the developing relationship between Lostara Yil and Pearl: Erikson is adept at creating unconventional chemistry and realistic relationships within a relatively small amount of page time, and I felt personally invested in everything that was happening to these two characters in particular.

The structure of House of Chains is slightly unconventional. The first quarter or so of the book focuses entirely on one character, before reverting to the more familiar shifting POV narratives used in previous books. This particular tale – of Karsa Orlong’s rise and fall prior to the main events of the series – is so enjoyable that I feel it could easily have been extended to fill the entire 1,040-page novel by itself. Instead, we have a spectacularly condensed account of Karsa’s origins, spanning several months and numerous continents and concluding in a way that leads perfectly into the main events of the story.

The events that follow are rarely less than thrilling. While there are a few less-than-exciting sections (particularly those centred around Gamet, as well as a few repetitive exposition scenes regarding the nature of light, dark and shadow magic) readers will find that the occasional slowing of pace gives us chance to take a welcome step back from what is an otherwise exciting series of events. Erikson’s awe-inspiring talent for creating breathlessly climactic convergences continues to manifest in House of Chains; and the way he manipulates rapidly-shifting POVs to build tension and maximise momentum is, as always, nothing short of masterful.

Once again, I’m in awe of Erikson’s storytelling. The combination of clever pacing and intense narrative, along with a complex web of events and unique characters truly earns House of Chains the title of ‘epic’, and continues to reinforce The Malazan Book of the Fallen as the best and most ambitious epic fantasy series I’ve ever encountered.

‘The Black Company’ by Glen Cook