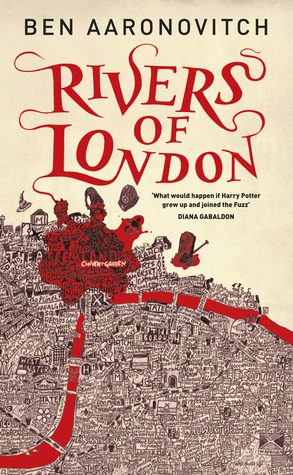 As a born-and-bred northerner, I’ll admit I had doubts about how much I’d enjoy a book based entirely around the life and culture of London . . . but against all my natural instincts I found myself completely charmed by Rivers of London.

Actually, perhaps ‘charmed’ isn’t quite the right word; rather, being whisked along on this peculiar journey down unfamiliar streets left me blinking and befuddled – in a good way! Rivers of London is refreshing in that it never pretends to be anything other than it is: a shamelessly daft, irreverent and slightly ridiculous story told through a funny and engaging first person narrator.

Peter Grant is a regular dogsbody in the London Met until, in the face of all probability, he’s informed that “yer a wizard, ‘arry!” and is roped into joining the hidden arm of the police that deals with cases of supernatural lawbreaking. Grant’s first case as a ‘real’ copper is to find out who – or what – is snatching bodies and forcing innocent people to do unspeakable things. Readers should consider themselves warned: Aaronovitch doesn’t shy away from violence and swearing!

Rivers of London’s plot is enjoyably bizarre and very entertaining. There are moments of disjointedness where it feels as though the story may be losing its thread, but it always picks up again and for the most part skips along smoothly. The novel’s irreverent tone and down-to-earth characters go a long way towards combating stereotypes, as does the author’s self-awareness of the clichés he is drawing on (cue sarcastic comments and humorous Harry Potter references).

To his credit, though, Aaronovitch mostly steers clear of clichés and tends instead to go for the unexpected. Ghosts? Yep, they’re real, only they’re a lot chattier and, well, cockney-er than you’ve ever seen them before. The goddess of the river Thames? She’s a Nigerian woman with a huge family and a fondness for custard creams. And the villain? Well, I won’t say anything about them, except that I never saw THAT coming. The way the protagonist just goes along with it all, resigning himself to his fate with a sigh, actually makes the magical aspects feel normal and totally credible: every time something new happens, be it a nest of vampires or a time-travelling ghost, instead of rolling their eyes the reader just shrugs and thinks, ‘oh, okay, cool.’

Rivers of London is a LOT of fun (did I mention that already?). I get the impression that I’ve barely scratched the surface of Aaronovitch’s crazy world, and I look forward to the day the stars align and I finally have time to read book two, Moon Over Soho.