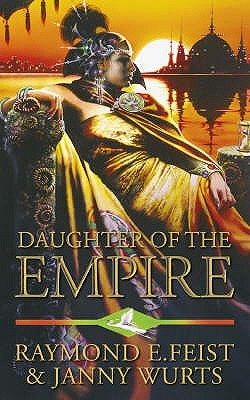 At the beginning of last year I embarked on a re-read of Raymond E. Feist, beginning (obviously) with Magician and the rest of the Riftwar Saga. But all the while I kept urging myself to read faster. Why? Because I couldn’t wait to revisit one of my favourite series of all time: the Empire trilogy.

The Empire trilogy is a stunning collaboration between Feist and fellow epic fantasy writer Janny Wurts. A drastic departure from Feist’s Middle-Earth-ish Midkemia – with its forests and its mud and its grey skies – we now see the world on the ‘other side’ of the rift. Kelewan: hot and exotic and home to the Tsurani society, an intriguing race who place great emphasis on honour, political maneuvering and social standing. For a Tsurani, public displays of emotion are deemed shameful; treachery is shunned only if the perpetrators are clumsy enough to get caught; and slavery and ritual suicide are the norm.

Foreign, dangerous, exciting: Kelewan is bizarre and colourful, and its inhabitants even more so. The rich and powerful consider it a mark of wealth and status to dress extravagantly, even gaudily, to the point where even their soldiers wear coloured armour to announce their loyalty. Tsurani society is organised into strict hierarchical family units, with the more powerful of these families referred to as Houses. There are hundreds of these Ruling families, each with their own colours and allegiances, and the authors really  manage to convey an authentic sense of a sprawling, ancient hierarchical empire.

Mara is a sympathetic and admirable protagonist. Beginning the Game from a frighteningly weak position, she must use her wits and resources to strengthen her House – making many sacrifices along the way. Worse, her enemies undermine (and underestimate) her since she is a member of the ‘weaker sex’, and she’s forced to compensate by exercising exceptional skill in all aspects of politics, business and high society.

Unlikely as it may sound, readers should expect to be fascinated by the social implications of (seemingly) trivial things: clothing, jewellery, eating, drinking, bowing, smiling, and other things besides. And as Mara becomes more accomplished at handling the various nuances of Tsurani life, so too does she take more risks in order to preserve the honour of her House . . . and often struggles to deal with the moral conflict that comes with orchestrating schemes that are necessary, but also ruthless.

Daughter of the Empire is immersive and flowing, and is thoroughly engaging for its setting and atmosphere as much as its plot. The Riftwar Saga is good, and there’s no denying that Feist has created a beautiful and deadly world here . . . but Janny Wurts really brings it to life. Each page bursts with the rich and vivid settings of Kelewan, evoking smells and sounds and colours. You can hear the calls of the bargemen and see the bustle of the markets when Mara travels to the city. You can smell the akasi blossoms in the evening and hear the needra being brought in from pasture when she returns to the peaceful Acoma estates.

It’s true that there’s little in the way of action (there are very few scenes in the book that can be described as fast-paced!), yet Daughter of the Empire is never plodding or arduous. Many scenes are fraught with a tension that’s just as exciting as outright conflict; and of course, after all the maneuvering comes the payoff. I can assure you it’s well worth the wait to see Mara’s plots finally coming to fruition after hundreds of pages of plotting and pain.

Re-reading Daughter of the Empire after so many years has reaffirmed this trilogy as one of my favourites of all time. Knowing how the rest of the series pans out only makes me more eager to continue with the series, and more enthusiastic in recommending it to others.

(Review originally posted over at halfstrungharp.com on 28 March 2015).