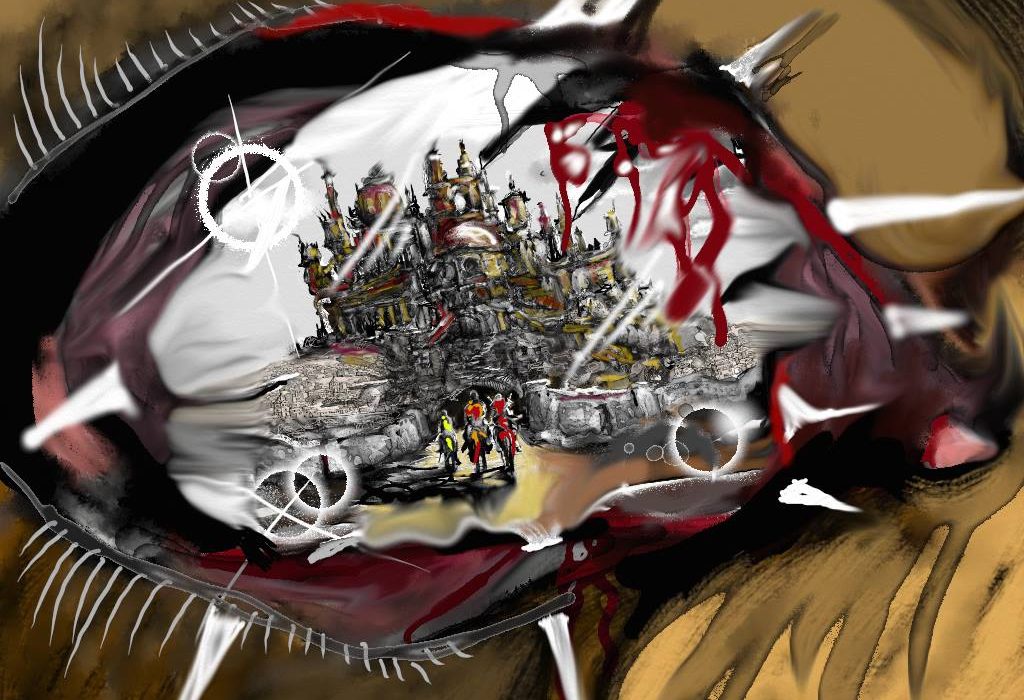 Beyond Redemption is a classic Western adventure tale. Three cowboys, bound by a beautiful friendship, return home to their ranch after a hard day’s work only to find—

Beyond Redemption is, in fact, a classic case of DON’T JUDGE A BOOK BY ITS COVER. Surreal and bloody, this first instalment in Michael R. Fletcher’s Manifest Delusions series is an uncomfortable and captivating exploration of imperfect characters in a broken world.

If someone decided to make a crossover between Inception and Robin Hood set in the Broken Empire, it might look a little bit like Beyond Redemption. Granted, Fletcher’s heroes aren’t exactly the Merry Men:

“We work together. We’re a team. A shite team, but we get things done. We aren’t friends and we sure as shite aren’t lovers. Never forget: I’d kill either of you if there was money in it for me.”

In fact, they might be the least merry protagonists I’ve ever encountered. A fair few of them could easily blend in with Steven Erikson’s grittier creations, while others wouldn’t look out of place amongst Jorg Ancrath’s Road Brothers. And in true ‘grimdark’ fashion, these morally murky men and women are not the exception but the norm.

Now, the prospect of villainous psychopaths roaming in heavily-armed bands is worrisome enough in any context. But in Fletcher’s world, it’s downright terrifying.

“The more people who believed something, the truer it became.”

I’ve adored this concept ever since I first read Terry Pratchett’s Hogfather: a brilliant tale in which an assassin attempts to murder Discworld’s version of Father Christmas by manipulating children so that they no longer believe in him.

Of course, Beyond Redemption executes this idea with less levity and a lot more dark abandon. Where Pratchett has ‘spare’ belief (leftover from the dwindling Hogfather) that spontaneously spawns quirky-yet-harmless anthropomorphic personifications (like the Oh-God of Hangovers, the Verruca Gnome, the Hair-Loss Fairy and the Eater of Socks), Fletcher instead gives us murderous embodiments of our own paranoias: reflections that become Doppels (identical copies); Doppels that then plot to steal our identity; and of course one man’s master plan to engineer the birth of an all-powerful god through the indoctrination of an entire city.

Nothing is as it seems in the world of Manifest Delusions. ‘Reality’ itself is a misnomer; neither trust nor truth exists, because everyone is out only for themselves.

“All communication is manipulation,” said Konig. “All interaction, social or otherwise, is a means of getting what you want. It’s the basis of society.”

Such oh-so-logical philosophising by characters like Konig is enough to boggle the mind and leave even the sanest reader questioning things they’ve always taken for granted – including the very definition of ‘sane’.

In fact, Beyond Redemption might be the first genre novel I’ve encountered that is brave enough to explore different perceptions and consequences of mental illness and psychological disorders in a fantastical context. It’s a difficult subject, to be sure, but anyone who’s concerned about serious issues being reduced to convenient plot vehicles may rest assured that Fletcher has clearly approached the material with gravity (and research).

Far from diminishing the seriousness and severity of such issues, Fletcher brings them to the forefront and makes them literal, tackling them head-on in a refreshingly direct approach. Much like visual depictions of widely-suffered conditions (such as depression, anxiety, anorexia, OCD and agoraphobia) the author gives us obsessions and fears made flesh to better illustrate the nuances of each ‘delusion’. Furthermore, he refuses to use language to obscure or euphemise any of his characters’ conditions, which is why it’s not too difficult for the reader to infer what (for example) a Doppel, a Dysmorphic, a Kleptic or a Therianthrope might be.

Beyond Redemption shows us a reality where none of this is hidden, and delusions are common knowledge. To some extent, Beyond Redemption normalises these disorders; and it does so without erasing their individual complexity – or undermining the suffering they cause.

Admittedly, this portrayal appears to be entirely negative at first. We meet a sociopath, a pyromaniac and a murderous kleptomaniac in quick succession, all of whom are incapable of empathy and prone to sadistic, violent impulses.

But by subtly unravelling their personalities (or should that be personas?) and revealing the psychological reasons behind their mania, the author hints that many – if not all – are themselves victims.

“She’d always assumed she could blame her parents, but what if she’d been born broken?”

Though initially it seems that the characters are defined by their disorders, the story focuses more on how the characters choose to define themselves. Their disorders have a part in shaping their personality, of course. But it’s the characters’ decisions – and whether they embrace, resist, pursue or exploit their own unique brand delusion – that ultimately define them. A subtle distinction, but an important one.

“She’d burn everything someday. Every ounce of hurt their fear caused her would be repaid in full. She’d burn the world.”

Even those with the most exaggerated abilities are much more than their delusions. In the reader’s mind Gehirn is not merely, as the other characters call her, ‘the Hassebrand’; she is Gehirn. Stehlen is not ‘the Kleptic’, and even Erbrechen is not ‘the Slaver.’ (The ‘fat slug’, on the other hand…)

At first glance, Beyond Redemption features rock-hard characters in a rock-hard world:

“Failure may be a harsh teacher, but you tend not to forget its lessons.”

But the more time we spend in their heads, the more we come to recognise and appreciate the author’s laudable knack for making even the vilest, most repulsive characters sympathetic. He accomplishes this by cunningly combining tragedy and comedy:

“You never met your mother? That’s not all bad. Mine sent me away to live with my father. He sent me back after I sold his horse to buy a lute.”

In fact, there’s a continuous undercurrent of black humour that’s as surprising as it is entertaining. This manifests in the well-written dialogue and harsh character banter, but also in the novel’s careful structure. For me, some of the most humorous and effective moments arose from juxtaposed scenes in which one characters’ thoughts or predictions are immediately followed by another’s contradictory (or supporting!) actions – a juxtaposition further enhanced by witty epigraphs that are alternately hilarious and disturbing.

“I heard a knock, and when I answered the door, there I was. Luckily I think much faster on my feet than I do and soon had myself tied in the fruit cellar.”

These increasingly delusional epigraphs – most of which are attributed to fictional ‘Gefahrgeist’ (sociopaths) – foreshadow some of the characters’ fates, and hint at the dangers for those who wield the power of delusion. A delusionists’ powers become stronger in inverse proportion to his or her sanity. But cross too far into insanity . . . and he/she loses themselves entirely.

“His delusions were growing in strength. Soon they would drag him down.”

Like all compelling magic ‘systems’, delusion (ironically) has limitations. Paradoxically, the more powerful the manifestation, the more real (and thus restricted by reality’s laws) it becomes. And so, in a fluid world where anything is possible, Fletcher instead gives us nightmares and gritty realism; a realm of manifest delusions where nothing is clean and even the sacred is profane.

Even the most powerful (and badass) beings are subject to certain physical rules:

“She tried to scream at Gehirn but only a dry croak escaped. She’d forgotten to fill her lungs. It annoyed her. She tried to draw breath and failed. Fire had burned ragged holes in her papery lungs. This would make communication difficult in the future.”

Here, the Cotardist assassin Anomie (who will feature in Grimdark Magazine’s Evil is a Matter of Perspective anthology) is hampered by physical limitations, despite herself being a living (kind of), breathing (sort of), walking defiance of the laws of physics.

Now, you’d think ‘far-fetched’ would be an adjective that could automatically be applied to Beyond Redemption. But Fletcher’s world is far from whimsical, and the small details and down-to-earth descriptions ground the reader utterly in this dangerous, dirty reality.

“Storm clouds spiraled in toward some central point like filthy water draining from a sink.”

Favouring grimy realism over purple prose, Fletcher writes with a brutal straightforwardness that fits the story perfectly. His characters are vivid and well-developed, often surprising us – for good or for bad – by behaving in ways that are at once unexpected and painfully believable. Their voices, too, are distinctive. Whether it’s Wichtig’s hyperbole, Gehirn’s self-loathing or Morgen’s gullibility, there’s little chance of forgetting whose PoV we’re currently inhabiting. Without exception, they’re all fascinating, compelling characters.

In fact, the entirety of Beyond Redemption is both fascinating and compelling. Michael R. Fletcher’s delusions are dark, bloody and shocking. If you haven’t met them already, I’d highly recommend you make their acquaintance. Just . . . don’t get too close to the mirror.

This review originally appeared on Fantasy-Faction on October 30th 2016.

(Reviewer’s note: The author uses German and Basque words for his characters and place names, apparently mangling both languages in the process. I don’t speak either one, so apart from a bit of head scratching at the very beginning I didn’t have a problem keeping track. I can see how it might be confusing, though, so here’s a link to the author’s Manifest Delusions Wiki for anyone who’s struggling!)