‘Emperor of Thorns’ by Mark Lawrence 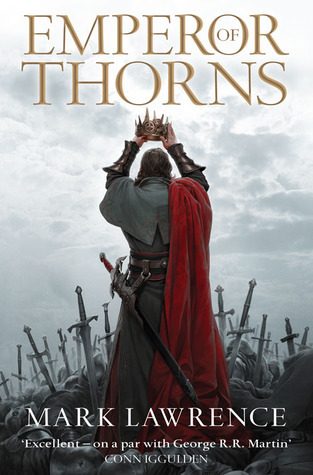 We’ve followed him for ten years of his life. We’ve lived his journey from the storm-struck thorns to the throne of Renar, and still Jorg Ancrath can surprise us – in good ways as well as bad.

Winner of the 2014 David Gemmell Legend Award for Best Fantasy Novel, Emperor of Thorns concludes the groundbreaking Broken Empire trilogy by Mark Lawrence. Jorg is now aged twenty; the Hundred have been summoned to a Congress to decide the matter of the next emperor. The throne has sat empty for over a hundred years, but Jorg plans to remedy that with his secret knowledge, stalwart companions and unique brand of tact and diplomacy.

“I’ve been to Congression before, Makin. I know what games they play there. This year we’re going to play a new game. Mine.”

In addition to the upcoming Congress, an even bigger challenge awaits. The Broken Empire must prepare itself for the biggest threat to humanity since the Day of a Thousand Suns: the invasion of the Dead King’s armies.

Emperor of Thorns follows the familiar ‘Lawrence’ structure. Flashbacks interposed with present-day events create suspense, builds tension and reveals key information at critical moments. However, there is also a new addition: a third-person account of the necromancer Chella (a character who was central to the storyline of the previous book but was only ever seen from Jorg’s point of view). Though I wasn’t particularly keen on this new POV, it certainly makes for some interesting insights into Chella’s character, and gives

us inside information about the Dead King and his legions.

Some of the most entertaining parts of the Broken Empire trilogy are the tales of the road, and we are treated to a fair few of them here. Typically grim yet delightful, these anecdotes about Jorg’s younger days among his road brothers reveal much more about Jorg’s tragic, twisted childhood. Secrets that have so far been only partially revealed or hinted at – such as Jorg’s burning hatred for the clergy – are now fully unveiled in harsh and uncomfortable ways. Lawrence continues to display a penchant for putting the ‘dark’ in ‘dark fantasy’, but somehow the horror and violence is never simply gratuitous. Instead, it’s used to deliberately manipulate the reader’s emotional response and force us to acknowledge that his protagonist has been brutally moulded and pushed to similar violence by these horrific external events, rather than just because of his “dena”.

On a slightly less grim note, one of my favourite aspects of this book is its scale. Lawrence shows us more of the Broken Empire than ever before. King of Thorns introduced us to the rocky highlands of Renar, Maladon in the icy north, and the fetid swamps of Cantanlona, and Emperor of Thorns takes us even further. From the lifeless wastelands of the Iberico to the desert city of the mathmagicians, from the silent horrors of flooded ghost towns to the affluent city of Vyene, Lawrence spoils the reader with haunting yet spectacular imagery.

Lawrence’s third novel is a joy to read, filled as it is with amusingly casual turns of phrase, poetic internal monologue, and brilliantly integrated reminders of past events – and hints about things to come. The  author also delights in leaving delicious clues for the reader regarding the true nature of Jorg’s broken world (my personal favourites being the hilariously sanctified “guardian” of the Gilden Gate, the martial teachings of “Lee”, and of course the ironic original function of the empire throne itself).

Emperor of Thorns is a spectacular finish to a brilliantly original fantasy series. Does Jorg find redemption? You’ll have to read it and find out. Think you’ve guessed how it’s all going to end? I can guarantee that you haven’t.