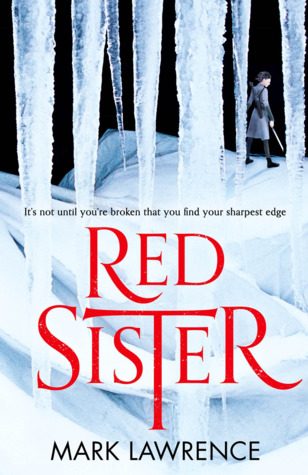 This review originally appeared on Tor.com on April 7, 2017.

Mark Lawrence’s latest novel, Red Sister, is a dramatic departure from the ‘grimdark’ trilogies for which he’s most widely known. The first in a brand-new series, Red Sister introduces us to a different world and whole new cast of characters. But before we discuss its merits, let’s get the inevitable comparisons with Lawrence’s existing work out of the way…

Without giving too much away, Red Sister weaves together three distinct timelines. The main part of the story follows protagonist Nona’s time at the Sweet Mercy convent, beginning with her arrival at the convent and focusing on her education, her developing relationships with her peers and mentors, and her martial training. Think Harry Potter meets Blood Song, but with an all-female cast. The second thread gradually reveals Nona’s past – from the unspoken incident in her childhood village, to the months spent in a slaver’s cage – and the third thread takes place a few years further on from the first, framing the rest of the story like a much more exciting version of Kote’s narrative in the Kingkiller Chronicles.

Readers familiar with Lawrence’s previous books (The Broken Empire, The Red Queen’s War) will likely either love or hate his use of alternating timelines; either way, Red Sister is a fine example of the trademark Lawrence non-linear narrative. The author wields flashbacks (and flash-forwards) with wicked skill, and I can say without hesitation that Nona’s tale surpasses even King of Thorns in the seamless inclusion of gasp-out-loud plot twists and edge-of-your-seat perspective shifts.

So: Red Sister shares obvious stylistic similarities with The Broken Empire and The Red Queen’s War. But that, my friends, is where the similarities end.

FROM RED QUEEN TO RED SISTER

Nobody likes change. At least, not at first. I myself – a keen admirer of Mark Lawrence since 2013 – felt leery about this new world, these new characters. How, I asked myself, could Nona Grey’s tale possibly match up to those of her predecessors? Jorg Ancrath and Jalan Kendeth both leave behind big, bloody shoes to fill, after all.

Yes, fans of Lawrence’s writing will be accustomed to a very specific kind of protagonist: namely, a witty, self-centred young male. And when readers learned that the stars of Red Sister would be almost exclusively female, apprehension fluttered through a sizable portion of Lawrence’s fan base as they asked themselves: what if this decision to write an all-female cast was no more than a middle finger aimed directly at feminist critics of his other books? What if this new protagonist – this “Nona”– turned out to simply be a gender-flipped version of Jorg or Jalan – a pale imitation, rather than a unique individual?

“It is important, when killing a nun, to ensure that you bring an army of sufficient size.

I believe most of us were reassured, if not by Red Sister’s first line, then certainly by its second. I for one knew I HAD to read more about this woman – a bloody nun, no less – who is apparently so badass that it requires an entire army just to challenge her.

So who is Sister Thorn? Who is her aggressor, and what’s his beef? What kind of world is this, in which killing nuns is a) acceptable, and b) a military action? Well, to answer these questions would be spoiling it. What I can tell you is that Nona Grey is a compelling, sympathetic protagonist who eventually kicks arse in the most believable yet satisfying ways.

Arse-kicking aside, it’s Nona’s journey that is truly captivating. Lawrence beautifully captures the nuances of Nona’s personality, so that her character unfolds along with her gradually changing perspective – which is no mean feat considering that Red Sister is Lawrence’s first full-length foray into third person. And as she learns more about the world, so too is her narrative laced with a poignant series of brutal observations and uncomfortable truths.

“A man driving a wagonload of children in a cage doesn’t have to state his business. A farmer whose flesh lies sunken around his bones, and whose eyes are the colour of hunger, doesn’t have to explain himself if he walks up to such a man. Hunger lies beneath all of our ugliest transactions.”

Above all, Nona’s perspective is jaded, yet wryly positive. This is a young woman who tries desperately to see the best in people – in her friends, especially – even when the worst is staring her right in the face; a young woman who remains hopeful, despite having been thoroughly kicked around by the frozen world she inhabits.

FROM BROKEN EMPIRE TO FROZEN LAND

To begin with, Red Sister is disorienting. Readers old and new are confronted at the start by an entirely new perspective, a whole bunch of unfamiliar characters, and a somewhat confusing double-prologue. Furthermore, this is Lawrence’s first full-length work of spec fic that is not set within the Broken Empire.

The main thing you need to know about Nona’s world is that it’s bloody cold, and bloody brutal. On a planet where every habitable area is gradually succumbing to encroaching ice from both poles, the warring kingdoms are confined to the Corridor: a narrowing strip of land between the ice, where peasants scratch a living from the frozen soil and nuns live in isolated cloisters, guarding their own mysterious and much-coveted sources of heat.

In contrast with the travelogue-style adventures of Jorg and Jalan, much of Nona’s tale takes place within the Sweet Mercy convent. Here, she learns the subtle arts of poisoning, self-defence, and – most importantly – trusting her own instincts. Nona’s band of sisters are also developed in a nicely understated way, and they all play off one another in entertaining ways.

Add to all this Red Sister’s eminent quotability, and you’ll easily see why I had such a whale of a time posting Goodreads updates whilst reading it. Quips and bits of canny wisdom arise far more naturally here than they did from the nihilistic observations of Jorg, or the chuckle-provoking but occasionally forced witticisms of Jalan—yet another way in which Lawrence has evolved as a writer.

“Words are steps along a path: the important thing is to get where you’re going. You can play by all manner of rules, step-on-a-crack-break-your-back, but you’ll get there quicker if you pick the most certain route.”

While the princes of both Thorns and Fools did indeed break all manner of literary rules, you could argue that they took the longest route to get to where they were going—that Jorg’s philosophising and Jalan’s repartee were obstacles in the journey. Red Sister has a much subtler, “grown-up” tone; one which I’ve only ever seen Lawrence exhibit in The Wheel of Osheim (the concluding volume of his most recent completed trilogy). This bodes well indeed for his future work.

“A book is as dangerous as any journey you might take. The person who closes the back cover may not be the same one that opened the front one.”

Sister Kettle’s words are apt indeed. Like I said: nobody likes change. At least, not at first. But in this case, the switch in style, setting and substance from the Broken Empire to the Book of the Ancestor is perhaps the best thing Mark Lawrence has ever done.

THE BOOK OF THE ANCESTOR: A NEW BEGINNING

Back in 2011, Liz Bourke declared Mark Lawrence’s writing to be problematic in her review of Prince of Thorns, not least because his debut novel was what you might call a “sausage fest.”

Despite these not inaccurate criticisms (which, believe me, Ms. Bourke is far from the only reader to have voiced), I – and many others – have spent the last few years eagerly devouring the regular instalments (one per year!) of fresh, sausage-y goodness.

But for those who remain unenamoured (or unfamiliar) with Lawrence’s work to date, Red Sister is the perfect point at which to become (re)acquainted . . . and this time, there isn’t a sausage in sight.

I suspect it’s going to be impossible for Lawrence to escape the notoriety that’s surrounded him since the release of Prince of Thorns. I’m also fairly certain that he wouldn’t want to; the bloke’s sold more than a million(!) books, after all. (No such thing as bad publicity, and all that.)

But with Red Sister being such a different project, you can understand why Harper Voyager have elected to make it look strikingly dissimilar from his previous books. In order to make Lawrence’s departure from the Broken Empire world abundantly clear, the publishers have switched from using the services of artist Jason Chan (with whom Lawrence has won double at the David Gemmell Legend Awards – twice!!) and instead chosen Heike Schuessler as the series’ new UK cover designer.

So while the US cover retains that gritty yet epic focus on the central character, the UK cover is almost mind-bogglingly different. As you can imagine, the cover reveal has been met mixed reception, with long-time fans expressing disappointment over the drastic change in style.

But as Lawrence himself has pointed out,

“It’s a tricky business. They wanted to signal that this is a whole new offering, not just another instalment of the world and stories begun in The Broken Empire and The Red Queen’s War. They wanted to invite in new readers who were perhaps put off by the piles of corpses &/or forest of blades emblazoning the front of my previous work.”

Whether you love or hate this new look, I’m urging you to read what’s between the covers before you judge. Red Sister contains familiar and much-lauded stylistic features of Lawrence’s writing, while dealing with brand-new characters and themes in an entirely original setting.

Readers who have never encountered the Broken Empire series should set it aside for the time being and instead dive straight into Red Sister.

And as for readers who disliked either Jorg or Jalan, let me assure you: Nona Grey would kick both their arses, and turn Jorg’s Road Brothers into bacon for her breakfast.