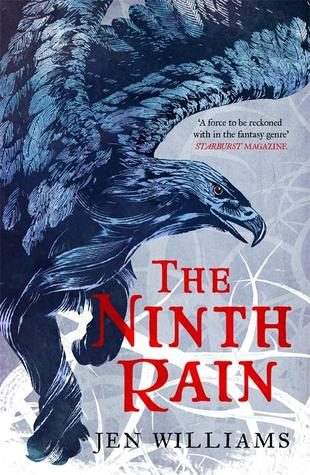 Writing fantasy fiction is about asking ourselves, ‘What if?’

When writing The Ninth Rain, I imagine Jen Williams asked herself much the same thing. What if Tolkien’s elves began to lose their immortality? What might happen if they

realised that drinking human blood could partially restore it? What if they then realised that the blood infected all who drank it with a wasting disease known as the Crimson flux – and that now their species is dying out faster than ever? What if witches were not only locked away, but their abilities exploited to produce drugs which their captors then deal and become rich?

As you may have gathered by now, The Ninth Rain is Jen Williams doing what she does best: traditional tropes with a twist. Like many aspects of her Copper Cat trilogy, the tropes in The Ninth Rain are recognisable, yet strange. For example: when Williams introduces the Eborans – an unnaturally beautiful, long-lived race who keep themselves separate from mere mortals – readers might roll their eyes and mutter ‘elves’. In a dark spin on the traditional, Williams takes the Tolkien-esque elves (and other wonders) and filters them through her own unique imagination. She then takes what’s left in the filter – the grit, the dirt, the uncomfortable, the bitter and the hard-to-chew – and mixes it with all kinds of unlikely ingredients with the experimental skill and competence of a chemist.

It was the Wild, festering behind gigantic walls. Enormous trees loomed over them, strange twisted things, their branches intertwining and spiralling around each other, as though they were blind and reaching out for their neighbours. Noon saw bark of grey, black and red, leaves of a diseased green , running with yellow spots. There were mushrooms too, bloated things like corpses left in the water too long, bursting from the trunks of the strange trees or erupting out of the black earth. It was already an overcast day, and dismal light within the compound was strained and jaundiced, almost as though it were an afterthought. A deep feeling of unease seemed to ooze from the deep shadows that pooled around every tree.

Atmospheric settings such as this form an eerily beautiful, almost sentient backdrop to the huge chunk of the book that’s focused on archaeology. Much of the plot revolves around the discovery and exploration of alien artefacts; this ‘treasure hunt’ is led by Lady Vintage de Grazon, who also happens to be one of the most engaging (and entertaining!) protagonists I’ve had the pleasure of spending time with lately. In fact, each of Williams’s three main POVs are portrayed in a very human way, so it’s easy to forget (despite consistent yet unintrusive reminders to the contrary) that Vintage’s companions are, essentially, a lich and a vampire-elf. On the flip side, infrequent glimpses into the minds of the antagonists remind us that so, too, are their enemies only human, and that regular people will do terrible things given sufficient motivation.

Someone much smarter than I am could probably write at length about the subtexts and deeper meanings running through The Ninth Rain; the theme of prejudice sustained with violence; of appearances vs. reality; of parasites, and the possibly unjustified stigma of consenting, symbiotic relationships between individuals, and between a planet and its population. Williams also layers her tale with metaphors for all kinds of things – sexual repression, hypocrisy, our responsibility to protect the natural world instead of destroying it – but she never throws it in your face. The fact that all these issues are brought up (if not dealt with) without sounding preachy is another huge mark in the author’s favour.

All in all, Williams has crafted a well-paced story set in a fascinatingly original world that foregrounds a small cast of diverse and irresistibly flawed characters. Though slow to start, The Ninth Rain is rarely less than compelling, and is unquestionably a strong introduction to the Winnowing Flame trilogy. Engaging and exciting, The Ninth Rain is Jen Williams at her absolute finest.