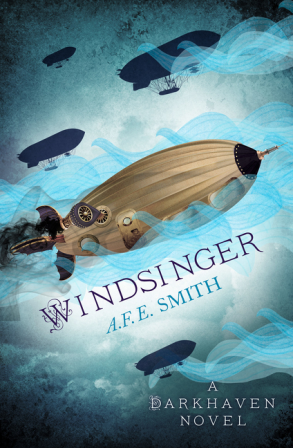 You could be forgiven for assuming A.F.E. Smith’s debut is a tame, fluffy tale about a magical unicorn. I assumed the same. But trust me when I say that there’s *nothing* tame or fluffy about Darkhaven.

Firstly, let’s get one thing straight: that’s not actually a unicorn. It’s an alicorn; a hybrid of the ‘pure’ Changer (shapeshifting) forms of griffin and unicorn. Why does it matter? Because the Nighshade family pride themselves on the purity of their unique bloodline.
According to its current patriarch – who follows the Targaryen-esque approach of, um, ‘keeping it in the family’ – his daughter’s alicorn form is as shameful as her rebelliousness is unacceptable. (He himself takes the ‘pure’ form of a mighty firedrake, because ‘nothing keeps

people honest like the fear of a fire-breathing lizard turning up on their doorstep.’)

And so Darkhaven kicks off with a prison break. Ayla Nightshade, assisted by her brother Myrren, escapes from the citadel – on the same night as their father is brutally murdered by a Changer. Obviously, this looks bad for Ayla, who spends the rest of the book trying to survive long enough to clear her name. But the search for answers turns up some uncomfortable truths about Ayla’s ancestors… and a few dark secrets about the goings-on within Darkhaven’s walls.

Ayla is dynamic and determined; a bit of a ‘damsel in distress’ type, but the writer makes it clear that this is situational – a product of her isolated upbringing rather than any fault in her character. But while Ayla is a likeable enough protagonist, the true stars of the story are Tomas Caraway (a disgraced former Helmsman and struggling alcoholic) and Naeve Sorrow (a mercenary).

In fact, Sorrow is (for me) a highlight of the entire Darkhaven series.

‘I come in peace,’ Sorrow drawled, offering him the knife hilt-first. ‘This was just in case I met anyone I didn’t like on the way.”

Essentially a murder-mystery in a fantasy setting, Darkhaven is a solid debut; not quite great, but certainly very, very good. Goldenfire, on the other hand, is brilliant. Characters who were sketched out in Darkhaven are filled in and brought to life in Goldenfire, as is the steampunkish city of Arkannen. Furthermore, the entire world feels much more three-dimensional, as Goldenfire’s plot is inextricably interwoven with its politics and economics

(as well as its characters, of course).

Set three years after the events of Darkhaven, Smith’s second novel explores the idea of an inherent conflict between tradition and science when Ayla Nightshade’s position of absolute power is challenged by an assassination threat from the neighbouring country of Sol Kardis – whose number one export just happens to be firearms. Darkhaven’s struggle to reconcile the inevitable technological advances of an industrial revolution with the need for gun control is a really fascinating underlying aspect of the story. (It’s particularly thought-provoking when political dissenters apply words like ‘tyrant’ and ‘monster’ to our very own Ayla Nightshade.)

Goldenfire is, in many ways, a self-aware deconstruction of judicial and societal issues. It’s also a well-written (and bloody exciting) mystery novel that uses its killer plot and engaging characters to unravel these issues in a succinct, honest and wry – if cynical – manner. I really admire the skill with which Smith carefully picks out narrative details to highlight problematic issues – such as feminism – without ever sounding preachy.

Ree flinched as a dozen heads turned her way. She could see how they expected this to go. Either she and the other girl would become great friends and form their own exclusive little circle separate from the rest, or they’d be bitter rivals who constantly vied to beat each other in training. Those were the only two narratives open to her. That was what happened when you were part of a minority: to everyone else, your identity was intimately bound up with the group you belonged to.

The extract above is taken from one of Goldenfire’s early chapters. In it, Ree Quinn – a noble-born girl from the provinces – is disgruntled to learn that she’s not the only person vying for the distinction of becoming Darkhaven’s first female Helmsman. In her desperation to separate herself from other women and escape the sort of sexist abuse she anticipates receiving from the male hopefuls, she herself unwittingly inflicts that same misogynistic attitude on her female peer. Ree’s hypocrisy isn’t immediately obvious, and just as she learns the error of her ways, so too does Smith ensure her readers emerge a little bit more enlightened than before.

Suspenseful and cleverly crafted, Goldenfire is a massive step up from Darkhaven (and is actually my favourite book of the series so far). From start to finish, every page is pure adventure, and the new characters – Ree, Zander, Penn, Miles – are a welcome and dynamic addition to the existing cast. (The return of Naeve Sorrow is also a HUGE selling point, obviously.) Furthermore, while it builds on the events of Darkhaven whilst also

subtly setting the stage for Windsinger, the plot of Goldenfire is wonderfully self-contained and its resolution wholly satisfying. It also left me with a big, goofy smile and a desperate urge to read more.

Luckily, Netgalley obliged with an e-ARC of book three, Windsinger – the awesomeness of which I’ve been shamelessly touting on social media for the last couple of weeks. Because even though I thoroughly enjoyed the fast-paced story and light-hearted tone of Goldenfire, there’s no arguing that Windsinger is a better, more fulfilling book.

Chillingly relevant to today’s social and political climate – which, I think we can all agree, is a particularly ripe breeding ground for contention – Windsinger is darker and more serious than its predecessors. The stakes are higher – for Ayla, for her citizens, and for Mirrorvale itself – and issues which had hitherto been present in the background now take centre stage.

‘People are far better at noticing how they’re different than how they’re the same. I see it year after year when I’m training new recruits. And war only brings it out more strongly. It turns everyone into patriots.’ One corner of his mouth turned up. ‘Not that I object to people being proud of their country, obviously. But there’s a difference between that and hating everyone else’s.’

Racism lurks below the surface of Goldenfire; it’s the driving factor behind the Helm’s suspicion of Zander, who is an immigrant from Sol Kardis. In Windsinger, this prejudice is right there in front of us, devolving into discrimination and violence as soon as diplomatic relations between Mirrorvale and Sol Kardis collapse.

The day after Sol Kardis declared war on Mirrorvale, a woman walked right up to Zander in the streets of the fourth ring. ‘Kardise scum,’ she hissed at him. And spat in his face.

‘For the Mirrorvalese to turn on us that quickly, that violently … it makes me think, maybe they hated us all along. Why else would they be so unable to separate a country from its individual descendants? Maybe they never looked at me and saw a person. Maybe they always just saw a Kardise boy.’

Smith uses Zander’s chapters to foreground incidences of hate crimes in a way that the reader can’t ignore, and heavily emphasises the fear and loneliness that accompany life as a minority. She deliberately juxtaposes these chapters with those of other characters – who are utterly oblivious to the various sorts of bigotry taking place right in front of them.

Zander approached the street vendor. Easy to see, now, why the youths had picked on him. By the colour of his skin and the cast of his features, he could have been Zander’s older brother.

‘Are you all right?’ Zander asked.

The vendor’s gaze flicked up, then quickly back down again. ‘Sod off.’

‘Just stop talkin’ to me, will yer? Anyone sees us havin’ a chat, they’ll think we’re plottin’ a murder.’ He turned his back on Zander and began to walk away, flinging a glare over his shoulder. ‘A pox on you and your bloody country.’

If Smith has shown us anything, it’s that there’s no such thing as good and evil; only shades of grey, shadows, and perspective. But sometimes, when you believe strongly in something, even the most hardened and morally-ambiguous person will see the necessity of taking one side to prevent the other from succeeding.

Sorrow propped her head on her hand and sighed. First he accuses me of trying to do the right thing, and now he tells me he trusts me. What am I, a fucking priestess?

Still, she was working against the kind of people who thought peace with an old enemy was a betrayal, rather than a genuine chance for change. The kind of people who would happily engineer a war, because they’d never have to fight in it. The kind of people who could use the phrase Kardise scourge to refer to ordinary citizens of Mirrorvale, getting on with their lives, who happened to have one or more foreign-born ancestors somewhere in their family tree.

Yes: if there was ever a right side, she was on it. That had to count for something.

Yes: even Naeve Sorrow – a notoriously unscrupulous mercenary – has a better sense of right and wrong than a huge percentage of Arkannen’s average population. Again, though, Smith doesn’t sermonise about morality; nor does she belabour the point. Amidst the frank conversations and philosophy are much wryer (yet equally discerning) observations about the dangers of judging people by their appearance or country of origin.

He looked sad. ‘It’s hard to believe of her. She always seemed such a sweet girl.’

Sorrow rolled her eyes. ‘Your problem, Tomas, is that your natural paranoia is in constant tension with an almost pathological desire to believe the best of people. Sweet tells you nothing. Fuck it, I could be sweet if the occasion demanded.’

They looked at each other. Caraway’s lips twitched. Sorrow glared at him for a moment before conceding. ‘Maybe not. But you take my point.’

Finally, characters like Sorrow and Caraway and Zander are full of hard-won wisdom, and Windsinger has important messages for all who’re willing to listen.

If one man in a hundred is a traitor, and I allow that knowledge to close my heart to the other ninety-nine, who is the winner then?

Insights and social commentary aside, Windsinger is a tense, exciting continuation of one of the most entertaining series I’ve ever had the pleasure of reading. Smith’s writing is powerfully emotive (Windsinger had me shedding tears in more than once place) and her storytelling has rapidly evolved from good to great to WOW.

Though it does take a much more serious turn in book three, the Darkhaven series is nonetheless 100% fun. With a diverse range of sympathetic characters and a metric fucktonne of page-turning action, A.F.E. Smith’s Darkhaven novels will leave you breathless, with a grin on your face and your heart aching for more.

This review was originally published on Fantasy-Faction on 10 February 2017.