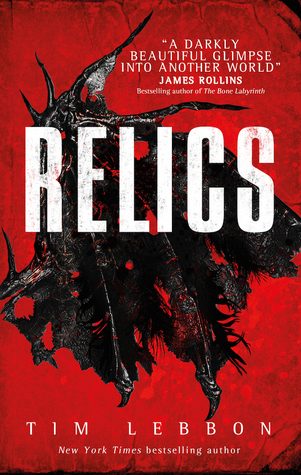 ‘I like the fact there can be so many secret places in a city filled with people. It gives me hope.’

Dean frowned, unsure. He searched for the words. ‘For wonder,’ he said at last. ‘Mysteries. Mysteries are important, don’t you think?’

Mystery. Wonder. Secrets. If you recall, these are three things which also happen to characterise Fantasy-Faction’s pick for the SPFBO final – aka. Paternus by Dyrk Ashton – in which a young woman discovers that mythological creatures are alive and kicking in present-day America.

You might notice some aspects of Ashton’s quirky tale mirrored in Tim Lebbon’s latest offering, Relics, which tells the story of a woman who gets the shock of her life when she runs into walking, talking legends while searching for her AWOL fella in modern-day London. I’m sure you’ll agree that in terms of premise they’re similar enough to warrant the comparison. However, they differ greatly when it comes to execution.

Unlike Paternus, which is fast-paced and packed with mythology and monsters from the beginning, Relics doesn’t really kick off until the halfway mark. In fact, it takes around 30% of the book for anything to happen. Perhaps a lack of familiarity with the urban fantasy/thriller subgenres meant that my own preconceptions were unrealistic, but I expected the story to start with a bang and instead found it somewhat lacklustre – not to mention needlessly convoluted.

Let’s start with the daft subplot about rival gangsters, which wouldn’t feel out of place in a Matthew Reilly novel and which I can only describe as ‘random’.

‘I want you to see something.’

‘And what’s that?’ Angela asked.

That’s an exchange between one of the said gangsters and Relics’s protagonist, Angela Gough, who just happens to be studying for a PhD in Criminology. For all the emphasis on how her past research has made her aware or these people’s terrifying reputations, Angela’s sullen attitude and cocky behaviour when meeting them is totally at odds with the fear she feels in the pages leading up to these meetings. Inconsistencies like these mean she’s not easy to sympathise with, or to understand; her motives are all over the place, and her character arc is riddled with little contradictions.

Initially, Angela seems like a modern, independent woman in a healthy, long-term relationship with a modern, independent man (Vince). No unnecessary drama, no shock-value domestic abuse; just two protagonists we can quietly root for. But later – when Angela starts dreaming about Vince proposing to her (despite saying earlier that she wasn’t interested in marriage), and lamenting the fact that Vince never wanted to start a family – the author brushes on tired old tropes of ‘the long-term girlfriend’, which naffed me off massively. In her dream of the ‘perfect evening’ with Vince, Angela actually ends the conversation by saying, ‘I suppose you’ll want sex now.’ That one line of dialogue contains negative stereotypes of both genders, which I found infuriating; it’s as if the author couldn’t help but assume that ALL women think and behave in these ways, even when there are bigger things at stake. It’s for these reasons that I didn’t give very much of a damn about Angela until much later.

Thankfully, I didn’t abandon the book (though I was tempted to on several occasions). And while it still (for me) doesn’t entirely live up to what it seems to promise (the ‘black market’ mentioned in the blurb is merely a sketchy plot device; Lebbon never really explains what people do with the titular relics, or who is interested in them, apart from a couple of sadistic ‘collectors’ who also happen to be notorious London gangsters, because of course they bloody do.), it delivers in other, unexpected, ways.

‘Our Time ended so long ago, and since then we’ve been creatures of shadows. We’re tales told around campfires, legends passed down through the generations. We’re whispers and glimpses. You’ll find us in storybooks and make-believe films, but through it all we’re in hiding.

Though we only meet a handful of the remaining ‘Kin’ (including Lilou, who just happens to be the best POV character in the book), one of Relics’s most enjoyable quirks is the way it subverts our expectations about mythical characters (again, very much like Paternus). For example, a quick Google search of ‘satyr’ paints a picture of a half-man, half-goat, one who’s young, drunk and constantly randy. Lebbon’s satyr, on the other hand – the psychopathic Ballus – suffers from erectile dysfunction, and loves nothing more than to crunch people’s skulls beneath his hooves, and dwells in an abandoned swimming pool with the dismembered remains of creatures he’s murdered. Carousing, fornication, or even solidarity with his fellows could not be further from this satyr’s mind.

‘Don’t make the mistake of thinking we’re all alike. Do you assume that a satyr thinks the same as a nymph bitch? You think this satyr—‘ he tapped his gray, hairy chest ‘—thinks the same as any other satyr? Don’t paint me with the same brush. I’m unique. I’m Ballus.’

Add to that a nymph who does her best to avoid being attractive, and a Nephilim who is monstrously un-angelic in both appearance and personality, and you have characters who are less alien and somehow more like flawed humans – just as some of Lebbon’s humans are clearly more bestial by nature than the creatures they hunt.

At this point I feel like I should probably add that if you don’t like seeing foxes get ripped in half (or people being tied to chairs and then bludgeoned with decomposing body parts), then Relics is probably not the book for you.

‘One of those wonders gored me with a dead thing’s splintered thighbone.’

As you can probably tell, I enjoyed (and would recommend) Relics in spite of my earlier complaints, which were largely a result of the high expectations I had going in. Plenty of people will be familiar with the author, Tim Lebbon (who is primarily a horror writer), and will likely have heard of his work even if they haven’t read it. After seeing the press release for Relics (not to mention admiring that striking, ominous black and blood-red cover design) I fully expected to be thrilled, and was disappointed to find that the supernatural elements are virtually non-existent until a good chunk of the story has gone by (and the fact that we spend much of that time following the protagonist, Angela, as she wanders around her apartment, goes out for coffee and occasionally talks to her friend also makes Relics a bit of a chore to read at times).

But if anyone picks this one up and discovers the same issues, rest assured that your patience will be rewarded when the sh*t finally hits the fan. Relics is an urban fantasy thriller, with a killer climax and some smart twists on classic myths and legends. A few more twists on tropes and characters, too, would have made it much more recommendable; as it is, it’s relatively fun, harmless pulp that many of you will probably enjoy.

Unless you’re a fox.

This review originally appeared on Fantasy-Faction on March 12, 2017.