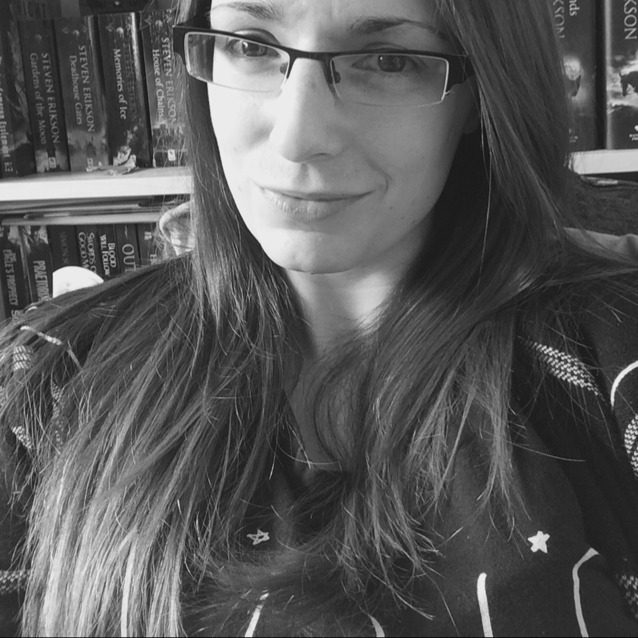 Laura M. Hughes dwells beneath the grey, pigeon-filled skies of northern England where she reads and writes for Fantasy-Faction and Tor.com. When she isn’t absorbed in playing Dragon Age or working on her first novel, you’re most likely to find her raving about the Self-Published Fantasy Blog-Off or trying to convince unsuspecting bystanders to read The Malazan Book of the Fallen.

Hughes encourages like-minded folk to seek her out on Twitter (@halfstrungharp) and to check out her horror/fantasy novelette, Danse Macabre, on Amazon. You might also be interested in her freelance copy editing and proofreading services, details of which can be found here.

I don’t get out much. Obviously blessed at birth by the deities of diffidence, I’ve perfected the art of living in my own head – and pyjamas – for extended periods of time.

But virtual Laura has ventured further afield. Her articles, reviews and interviews have popped up in a variety of places around the web: she’s now a regular contributor at Fantasy-Faction, and has even had the privilege of writing for Tor.com!

Here’s a handy list of all these guest posts, along with links to the folk who were mad enough to host such rambling nonsense. You’ll also find bits and bobs like reviews, updates, reviews, updates and reviews.

June 29
I appear on the Grim Tidings Podcast alongside Dyrk Ashton, Jonathan French and Phil Tucker to discuss the SPFBO!

May 4
The one and only Mark Lawrence reviews Danse Macabre – and gives it FIVE STARS!

January 8
Michael R. Miller invited me to write a guest post as part of his ‘Writing Journeys’ blog series.

January 2
Danse Macabre gets a 5* rating – and a sensational review! – from Drew Weldon, aka. The Tattooed Book Geek.

January 1
The one and only Teresa Frohock reviews Danse Macabre, calling it ‘a dark little gem of a novelette‘.

December 21st – I went under the spotlight as Writer of the Day on r/Fantasy!

December 9th – Danse Macabre picks up the Gobie Award for Best Novella over at bloggoblin.com!

November 28th – Tor.com publish another piece of mine – this time about The Faithful and the Fallen by John Gwynne!

November 13th – Danse Macabre rubs shoulders with Jay Kristoff and Mark Lawrence in James McStravick’s ‘Best of 2016‘ list over on The Bandwagon!

November 12th – I meet Marc Turner for the first time!

October 29th – On Fantasy-Faction, I shamelessly gush about positivity and professionalism in the Self-Published Fantasy Blog-Off

October 13th – Danse Macabre gets another 5* review, this time at The Bloggin’ Hobgoblin!

September 19th – Tor.com publish my article about Gardens of the Moon!

July 31st – Danse Macabre gets a glowing review on observantraven.com!