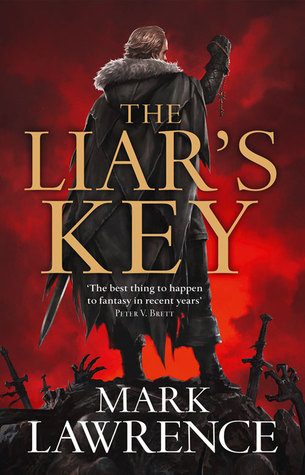 In the run-up to the Gemmell Awards I thought it’d be fun to jump on the virtual bandwagon and re-post my own reviews of the titles I’ve read from the Legend longlist. (I’ve already reviewed Joe Abercrombie here.) Since I’m lucky enough to be currently reading The Wheel of Osheim, I thought it rather appropriate that I post about Mark Lawrence’s entry next.

Mark Lawrence is one of my favourite modern fantasy authors. First he blew me away with his Broken Empire trilogy (Prince of Thorns, King of Thorns and Emperor of Thorns). Then, just when I thought he couldn’t get any better, he unleashed a new trilogy titled The Red Queen’s War, set in the same dystopian universe as Broken Empire. The first book in this series, Prince of Fools, was simply awesome; happily, the series continues in the same vein with The Liar’s Key. Although its hefty length means it’s not quite the mile-a-minute thrill ride Prince of Fools was, The Liar’s Key does allow us more opportunities to catch our breath and spend more time learning about our favourite loveable rogue Jalan Kendeth.

Having been dragged to the ends of the earth in the previous book, The Liar’s Key sees the spoilt prince of Red March dragged all the way back home again in a variety of dangerous and entertaining circumstances. We’re still following several of the same characters from earlier in the series, including Snorri, a Viking warrior on a quest to reclaim his lost family, and Tuttugu, Snorri’s most loyal follower (who actually prefers fishing to axe-fighting). A couple of new characters are also thrown into the mix: the witch Kara and the orphan child Hennan add a new dynamic to the not-so-happy gathering, and open up new and interesting possibilities plot-wise.

The Liar’s Key is essentially a fantastically insane travelogue, meaning that yet more of the wonderful broken empire setting is unveiled here than ever before. Not only are we shown new places that have thus far only been hinted at – such as the dreaded Wheel of Osheim – but we also bump into a couple of characters from the original Broken Empire trilogy, each instance of which feels like a cross between a celebrity cameo and a reunion with old friends. Jalan himself is an incredibly likeable character despite his somewhat despicable nature, and his seemingly ceaseless supply of sardonic retorts and self-deprecating witticisms makes almost everything that comes out of his mouth immensely quotable. Furthermore I really enjoyed the way in which Jal’s character develops subtly and consistently, and the use of flashbacks to reveal more about his family’s history is done in a really clever and interesting way.

Lawrence’s prose flows effortlessly as always, making every page delightfully easy and entertaining to read. While I didn’t enjoy The Liar’s Key quite as much as I did Prince of Fools, it’s not often I find myself reading a book for the first time knowing that I’ll re-read it at some point in the near future. Lawrence’s Broken Empire books have already proven themselves to be even more clever and entertaining upon re-reading, and I’m certain that The Red Queen’s War will be the same. The world of the broken empire is like a distorted jigsaw puzzle, the pieces of which are scattered throughout each book, and we can’t truly start to put it together properly until we have all the pieces.

Mark Lawrence is as creatively talented as Jalan Kendeth is outrageously likeable, and I continue to be thoroughly entertained by both of them.

(Review originally posted over at halfstrungharp.com on 21st July 2015.)

The Red Queen has set her players on the board…

Winter is keeping Prince Jalan Kendeth far from the longed-for luxuries of his southern palace. And although the North may be home to his companion, the warrior Snorri ver Snagason, he is just as eager to leave. For the Viking is ready to challenge all of Hell to bring his wife and children back into the living world. He has Loki’s key – now all he needs is to find the door.

As all wait for the ice to unlock its jaws, the Dead King plots to claim what was so nearly his – the key into the world – so that the dead can rise and rule.