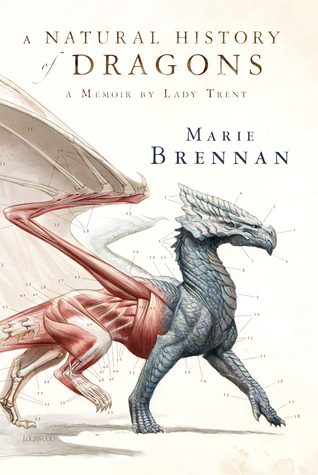 I’ve got nothing against dragons, especially when they play such a vital part in so many awesome fantasy series. After all, dragons are integral to the whole mythos of Steven Erikson’s Malazan Book of the Fallen; dragons feature prominently in such celebrated fantasy works as Terry Pratchett’s Discworld and Raymond E. Feist’s Riftwar Cycle; and of course the entire plot of J.R.R. Tolkien’s The Hobbit couldn’t have existed without that most iconic of dragons: the mighty Smaug.

This is all well and good; I’ve no objection to a few dragons here and there so long as they’re serving some kind of function within the story, be it as an awesome plot device or as a way of setting the scene. But when their presence in a novel seems to serve no other purpose than just sort of existing . . . well, that’s when dragons start to feel kind of stale. And ‘stale’ is not a word that should be used when referring to giant flying monsters.

And this is where the first of the Memoirs by Lady Trent makes its grand entrance. Here, Marie Brennan has accomplished something extraordinary: she has made dragons fresh and exciting again, no easy feat in today’s competitive and draconian-saturated SFF market. Remember when you first discovered fantasy, and felt that awesome thrill of wonder and possibility? A Natural History of Dragons takes us back to that giddy moment through the wonderful character of Isabella, and the captivating tale of her childhood passion for dragons.

Unlike so many modern female fantasy protagonists – who are often termed ‘strong’ characters as a result of their skills in either weaponry or manipulation – Isabella is strong in that she remains true to her own nature in the face of her male-dominated surroundings. Despite her outwardly ‘outrageous’ behaviour, Isabella retains her girlish charm and naïveté; she never compromises her femininity, in spite of her ongoing struggle against the social restrictions of a strictly patriarchal society; and most importantly of all, she continues to cling to her lifelong passion – the study of dragons – even when the pursuit of this passion seems like an impossible dream. She is, quite simply, a hugely likeable and sympathetic protagonist. Furthermore, Brennan’s narrative voice is beautifully elegant and consistently engaging. In fact, the entire novel is suffused with the observant wit and wry humour of Jane Austen or Charlotte Bronte, with the fantastical subject matter providing an intriguing vehicle through which the author probes issues of class, gender and morality – though it never once sounds preachy.

Add to all this a delightful cast of secondary characters, continually subtle yet vivid settings – particularly the eastern-European-esque wilderness of Vystrana – and frequent injections of self-deprecating humour, and you have the essence of Marie Brennan’s wonderful tale. A Natural History of Dragons is always engaging and entirely charming, and abounds with moments of tension, humour and emotion. Isabella may just be my new hero, and the Memoirs by Lady Trent my new favourite series.

(Review originally posted over at halfstrungharp.com on 10th October 2015)

All the world, from Scirland to the farthest reaches of Eriga, know Isabella, Lady Trent, to be the world’s preeminent dragon naturalist. She is the remarkable woman who brought the study of dragons out of the misty shadows of myth and misunderstanding into the clear light of modern science. But before she became the illustrious figure we know today, there was a bookish young woman whose passion for learning, natural history, and, yes, dragons defied the stifling conventions of her day.

Here at last, in her own words, is the true story of a pioneering spirit who risked her reputation, her prospects, and her fragile flesh and bone to satisfy her scientific curiosity; of how she sought true love and happiness despite her lamentable eccentricities; and of her thrilling expedition to the perilous mountains of Vystrana, where she made the first of many historic discoveries that would change the world forever.