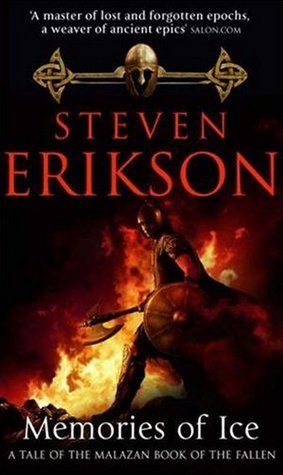 Memories of Ice (the third book in Steven Erikson’s Malazan Book of the Fallen) returns us to the continent of Genabackis (where Gardens of the Moon took place). Many characters from the first book re-appear here, such as notable favourites Anomander Rake, Quick Ben, Kruppe, Tool, Toc the Younger, and Whiskeyjack and the rest of the Bridgeburners.

Mixed in with these are several new additions: there’s Hetan the randy Barghast, Gruntle the grumpy caravan guard captain, Kallor the immortal grudge-holding warrior, Itkovian the tragic servant of a lost god, the mysterious and unflappable Lady Envy, and of course the sinister pair of necromancers known as Bauchelain and Korbal Broach. All of these characters are thrown together as a result of a dubious alliance against a malign empire known as the Pannion Domin.

The characters, both new and old, are incredible, and many of the novel’s best moments are character-centred rather than action-driven. Quick Ben’s casual confrontation with the necromancers; Rake’s late-night conversations with Whiskeyjack; Lady Envy’s continual attempts to exact obedience from her companions; and just about anything involving Kruppe – all contribute to make Memories of Ice feel like a living, breathing part of the Malazan world, rather than just the next step of the story.

That’s not to say that the action falls flat, of course: Erikson gives us a plentiful share of the usual fast-paced battles, awesome warrens, explosive weaponry and bickering gods. He also introduces many new elements: some of these are simply brilliant, while others are downright terrifying (we now have K’Chain Che’Malle stalking the world, lightning-fast dinosaur-like undead beings with blades for arms. Yikes!).

But Memories of Ice isn’t all action and horror. Erikson’s capacity for beautiful tragedy, honed to a fine art in Deadhouse Gates, is also deftly applied here: he has a real knack for twisting the knife in your heart before you even realise you’ve been stabbed with it. There are so many small moments that left me blurry-eyed – even though I was expecting them. Then there’s the dark and irreverent humour, deftly placed and serving as a welcome complement to the pathos seeping through the whole tale. The segments following Lady Envy and her motley companions are a delight to read, as are Kruppe’s befuddling monologues and Picker’s interactions with her disparate squad of soldiers (particularly Antsy).

However, a lot of the book is spent following an army on the march, and as such many of the locations (campfires, command tents, hilltops) become quite repetitive. Erikson also seems to have suddenly acquired the desire to explain things in detail, and to recap or clarify things that have already happened. This isn’t necessarily a bad thing; in fact, Gardens of the Moon would probably have benefited from this in places. But it does occasionally feel as though a huge chunk of the book is taken up with conversations between characters regarding something that we’ve just read, and it sometimes feels as though we’re having to experience some events several times before moving on. It’s as though, upon proof-reading the book, the author slotted in an “exposition inside a command tent” scene wherever he thought his characters’ motives weren’t 100% clear.

I think it’s this repetition that contributes to the relatively slow pace of the novel. Despite the fact that Memories of Ice contains two major – no, epic – battles, along with several exciting skirmishes and powerful displays of magic, I think it suffers from being just a little bit too long. Erikson takes almost 1200 pages to do what he could probably have accomplished in 900, and while I would usually disagree with the concept of “too much” Malazan, I have to say that this is the first time so far during my re-read of the series that I’ve felt a tiny bit disappointed. I always recalled Memories of Ice as being my favourite of the series, full of undead monsters, creepy necromancers, gritty warriors and epic conflict. What I didn’t remember was the sheer volume of command tents, hilltop parleys, and Paran’s stomach pain.

It really says something about Erikson’s writing that, in spite of my griping, Memories of Ice still remains one of the best books I’ve (re-)read this year. The last 200 pages or so more than make up for the slow patches scattered throughout, and I doubt anyone familiar with the series would be able to read them without blurry eyes and a wobbly bottom lip. Contrary to my own recollection, Memories of Ice is not quite as enthralling as Deadhouse Gates . . . but, as with the other books in the series, it touched me in a way no other story has ever quite managed.

(Review originally posted over at halfstrungharp.com on 13 October 2014).