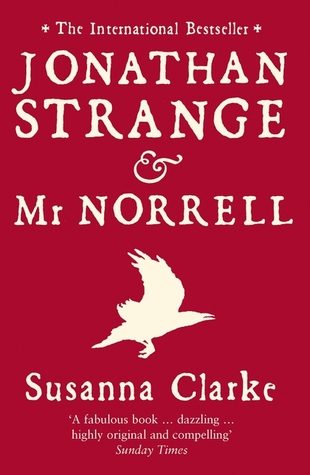 Gorgeous. Enthralling. Captivating. Mesmerising. These are all words I certainly didn’t use when I first attempted to read Jonathan Strange & Mr Norrell a few years ago, finally abandoning it around the 600-page mark. I remembered little about the book, except that I quite enjoyed it at first but found that it soon became dry and laborious. However, I recently came to realise that I might be the only person in existence who has a problem with the book, and so resigned myself to give it another go . . . and WOW am I glad I did.

Jonathan Strange & Mr Norrell is, ostensibly, a tale of two magicians named Jonathan Strange and Mr Norrell. But this is far too simplistic a description for what is actually a lengthy, beautiful, meandering tale of magic and ambition and rivalry and friendship, told over the span of a decade and often focusing on subplots and minor characters as much as on its two main protagonists.

In Clarke’s alternative nineteenth-century England, magic is considered a lost art. Not since the disappearance of the Raven King – a legendary magician who once ruled the North – and his successors have there been any true magicians. That is, until Mr Norrell makes himself known as the only practical magician in England, and possibly the world. The fashionable people of London are delighted by such a novelty, while the government see in him an opportunity to gain advantage in the war against Napoleon. When a second magician presents himself to Mr Norrell as a pupil it seems everything is going splendidly . . . but it doesn’t take long before professional disagreements, a string of tragedies, and the interference of a mysterious gentlemanly antagonist begin to make both Strange and Norrell think twice about their ambition to restore magic to England.

Clarke’s story, and the alternative England in which it takes place, is incredibly detailed and ambitious, astonishingly so when considering that this is the work of a debut author. Although the plot itself is anything but focused, this is clearly an intentional quirk that only adds to the novel’s charm, and the sense of unexpectedness created by the winding series of events is just one of the things that kept me reading. Though meandering, the story is nonetheless coherent and engaging. Each chapter is titled with the month and year in which it takes place, which is particularly helpful in keeping track of events; and an abundance of footnotes alternately provides the reader with additional information, historical references and fascinating anecdotes, adding further charm and depth to an already rich and satisfying reading experience.

Furthermore, the pages are filled with beautifully vivid and evocative descriptions: of magical forests and city streets in winter, of candlelit libraries and dark landscapes, of ruined castles and mysterious roads. The author doesn’t just set the scene; she dazzles the reader with striking imagery and envelops them in an atmosphere both hauntingly magical and poignantly melancholy.

Clarke bravely and successfully attempts to emulate nineteenth-century novelists in both subject and tone. The result is a delightful hybrid of Austen’s droll social satire and ironic commentary and Dickens’s comical caricatures and perceptive observations of city life. On the other hand, the dry humour suffusing the whole is, I suspect, entirely the author’s own, and it is this mocking, almost self-deprecating voice that provides entertainment at times when arguably nothing is happening plot-wise. I particularly enjoyed the satirical portrait of Mr Norrell that continues throughout the novel: Norrell is somewhat despicable what with his jealous hoarding of knowledge, rudeness to others and egotistical sense of his own superiority, not to mention his hypocrisy; and yet he is also clever and fascinating, and I found myself turning page after page just to see what he would do next.

Of course, both protagonists are entertaining in their own way, but it’s the brilliantly varied cast of secondary characters that really helps them to shine: Drawlight is despicable yet strangely sympathetic; Lascelles is clever and manipulative; Stephen Black is noble yet naïve; Childermass is wry and enigmatic. And (naturally) none are quite as secondary as they first appear, least of all the spectacular villain known only as the gentleman with the thistle-down hair.

Despite Mr Norrell’s ongoing attempts to categorise it in lists and trap it in books, the magic of Jonathan Strange & Mr Norrell is ephemeral, mutable and largely unexplained. In this day and age, where works of fantasy are too often judged by how fastidious and logical their magic rules and ‘systems’ are, I can’t stress how refreshing it is to read a work instead suffused with nebulous magic, myths and legends, where the limits and possibilities and, indeed, reasons for magic remain mostly unknown.

I’ll admit that I became a little disheartened not long after beginning the book, largely because it seemed to be taking so long to read. However I soon realised I was more than happy to linger over each page, to take the time to appreciate each word, and even to re-read lines and passages that particularly appealed. By the time I finally approached the end I deliberately slowed my pace even further, to savour the final moments of this extraordinary book that I once disliked but now utterly adore and admire. I’m running out of ways to express how much I loved this book, so I’ll end with an incoherent string of adjectives. Jonathan Strange & Mr Norrell is gorgeous. It’s enthralling. It’s surprising. It’s captivating. It’s mesmerising. It’s hilarious. It’s heart-breaking.

It might even be the best book I’ve ever read.

(Review originally posted over at halfstrungharp.com on 17th May 2015)

The year is 1806, England is beleaguered by the long war with Napoleon, and centuries have passed since practical magicians faded into the nation’s past. But scholars of this glorious history discover that one remains, the reclusive Mr Norrell, whose displays of magic send a thrill through the country. Proceeding to London, he raises a beautiful woman from the dead and summons an army of ghostly ships to terrify the French.

Yet the cautious, fussy Norrell is challenged by the emergence of another magician: the brilliant novice Jonathan Strange. Young, handsome and daring, Strange is the very antithesis of Norrell. So begins a dangerous battle between these two great men which overwhelms that between England and France. And their own obsessions and secret dabblings with the dark arts are going to cause more trouble than they can imagine.