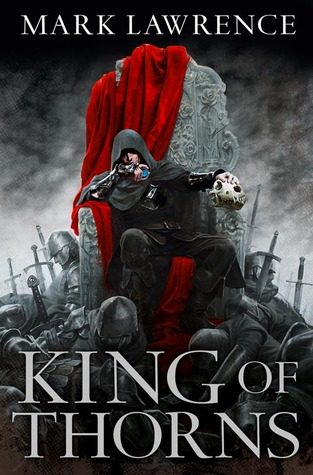 Anyone will tell you that the middle part of any trilogy is usually the weakest; that it functions mostly as filler between books one and three, a tiresome interlude between the start and the big finish. Not so with King of Thorns: it’s fast-paced, tense, action-packed, and has several thrilling plotlines that make for a more exhilarating read than even the trilogy’s first instalment, Prince of Thorns. No wonder it was shortlisted for the 2013 David Gemmell Legend Award (losing out to Brent Weeks’ equally worthy The Blinding Knife).

“I made mock of the dying at Mabberton and now their ghosts watched me burn. Take the pain, I said, and I will be a good man. Or if not that, a better man. We all become weasels with enough hurt on us. But I think a small part of it was more than that. A small part was that terrible two-edged sword called experience, cutting away at the cruel child I was, carving out whatever man might be yet to come. I promised a better one. Though I have been known to lie.”

As you probably know, King of Thorns is the second instalment in Mark Lawrence’s post-apocalyptic, dark fantasy (aka. ‘grimdark’) Broken Empire trilogy. Picking up the story of Jorg Ancrath four years after the events of Prince, Jorg is now King of Renar, and must

defend his position against popular Prince Orrin of Arrow. However, due to earlier events Jorg has had certain memories removed from his mind (convenient, I know). These memories are revealed through a series of flashbacks in a style similar to that of the novel’s predecessor, but much more cleverly and intricately crafted. The ‘present day’ plot of the novel is centred on Jorg’s plan to defeat the Prince of Arrow; a plan which is progressively revealed throughout the story and leads us with ever-increasing momentum towards the adrenaline-filled finish.

Prince Orrin is everything you’d expect to see in a traditional epic fantasy. He is handsome and moral, gracious and brave, and above all he wishes to secure peace and prosperity for the empire . . . and we spend the entire novel rooting against him (well, I did). I really like the fact that the author has managed to deconstruct traditional fantasy archetypes to such an extent that ‘good’ and ‘evil’ become merely a matter of perspective. Orrin is the golden fairy-tale prince, and yet somehow our Little Jorgy – severely flawed and of dubious morality – manages to emerge the hero.

I’ll be honest: the first time I read this book I had two major issues with it, the first being the flashbacks. There are four (I think) different time frames/points of view, and I initially felt these to be chaotic, distracting and occasionally repetitive. I felt that they detracted from my enjoyment of the main story by disrupting my sense of time and place. I got that they were being strategically placed to build towards the big reveal, but felt that there was too much back and forth within the narrative.

Now, having read this book a second time, I find it difficult to reconcile my initial response with what I’ve just read. For a start, I realise that the sense of dislocation is deliberately evoked in order to create an empathic link with Jorg: we feel but a tiny fraction of what it must be like to be suddenly hit by a memory you have no recollection of having lived through. Secondly, the ordering of the flashbacks is anything but chaotic. The narrative is artfully constructed so as to reveal crucial plot points at strategic moments, as well as to both shock and tease the reader; and what I had at first thought to be random revealed itself instead to be a complex web of memories cunningly fashioned by the author in a way to make one gape with admiration.

My other initial problem with the book was that I didn’t enjoy the ‘Katherine’ chapters. I found the saga of her diary entries to be an unnecessarily dull counterpoint to Jorg’s narrative, and found myself wishing her journal pages had never been found. Of course, reading the novel again made me realise why her chapters are a vital part of the on-going Sageous plotline, and her sad words resonated far more poignantly because I was aware of how it was going to end. I’m more willing now to accept Katherine as a necessary part of Jorg’s story.

I’ll admit: there were parts of this book that I found difficult to read, and which I know have caused outrage amongst readers elsewhere on the web. A scene which I’ll refer to only as the Justice of King Olidan actually hurt me to read, even more so the second time because I knew it was coming and was powerless to stop it; and yet, I found myself elated that Jorg was able to re-live the memory and re-evaluate the lessons he thought he’d learned from the experience. The fact that the reader is made to experience such feelings is a testament to the author’s ability to feel, and to write in a way that makes others feel too.

On a similar note, King of Thorns feels a lot more personal than Prince, perhaps because scenes such as these allow the reader to connect more with the protagonist: Jorg has stabilised a little and matured emotionally, and we live through this transformation as much as he does. There is also a lot more focus on his internal struggle with the way he has lived so far – here’s a powerful example:

“I told Coddin that stubbornness led me to climb, and perhaps it did, but there’s more to it. Mountains have no memory, no judgments to offer. There’s a purity in the struggle to reach a peak. You leave your world behind and take only what you need. For a creature like me there is nothing closer to redemption.”

I don’t want to mislead anyone into thinking that this is some kind of sappy coming-of-age drama, by the way. I mentioned in my review of Prince of Thorns how the first book came under fire by those who were outraged by the immoral actions of the central character within the first few pages; if those same people have decided to read King of Thorns I’m guessing they’re currently rolling in their graves after choking on their own moral indignation. There’s some dark stuff here, darker than the first book, with enough creepy situations and haunting images to give you nightmares for a month. There’s action – lots of action! – and the flashbacks are written in the present tense, which really draws you into the moment and uses the “elephant of surprise” to keep you on the edge of your seat, right up to the eventual reveal of the final heart-breaking secret.

I’m hopeful that the final instalment in the trilogy, Emperor of Thorns, will prove to be as good as this one. What with the subtle transformation of Jorg’s character, the driving themes of memory and destiny, and the intriguing foreshadowing of the Dead King, I can’t wait to read it. According to Jorg,

“A time of terror comes. A dark time. The graves continue to open and the Dead King prepares to sail. But the world holds worse things than dead men. A dark time comes.

If it offends you.

I don’t think I’ve ever shivered with anticipation before; but after reading those closing lines, how could I not?

This review was originally published on halfstrungharp.com on 23rd September 2013.