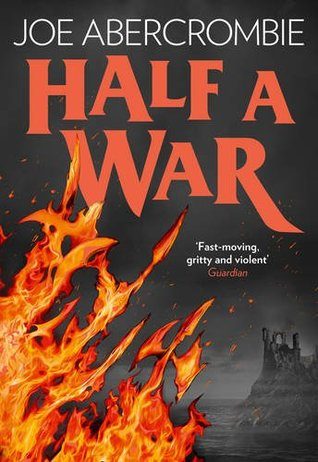 In the run-up to the Gemmell Awards I thought it’d be fun to jump on the virtual bandwagon and re-post my own reviews of the titles I’ve read from the Legend longlist. Starting with Abercrombie!
Up until Half a War I’d been kind of ambivalent towards the Shattered Sea trilogy. As a huge fan of Abercrombie’s six First Law novels I entered his latest series with humongous expectations . . . and ended up feeling a little underwhelmed by it. The characters in Half a King and the story in Half the World felt, to me, distinctly lukewarm: there never seemed to be any doubt as to whether the main characters would achieve their goal, and it never once felt as though they were in any real danger.

Not so in Half a War. Despite its title, this book doesn’t do things by half. Half a War is packed from cover to cover with full-on danger, full-on violence, and full-on excitement. The stakes are higher than they’ve ever been: the events of the first two books have finally come to a head, and the Shattered Sea is embroiled in outright war. The High King’s army are marching, and standing against them is the small but dogged alliance of Gettland, Vansterland and Throvenland. But it’s an alliance of necessity rather than friendship, and the leaders of each nation must learn to co-exist for the greater good of their people.
I simply can’t praise Half a War highly enough. This is the Abercrombie I know and love: the Abercrombie who writes killer action scenes and breathless, adrenaline-fuelled battles; the Abercrombie who loads his pages with dark humour and gritty violence; the Abercrombie who creates flawed yet likeable characters whose witty yet realistic dialogue dances off the page and whose fates we as readers become genuinely invested in. This Abercrombie is not afraid to place his characters in dangerous situations, and to force them to make decisions in which they must weigh their own needs against the needs of others. Neither is he afraid to hurt his characters – or, by extension, his readers – and I feel like this is the first time in this trilogy that the ‘true’ Abercrombie really shines through the YA veneer.
In the same vein as the second book, Half a War has characters who previously featured as main protagonists taking something of a back seat, allowing a new set of characters to come to the fore. So, while Father Yarvi and Thorn Bathu both have their fair share of page time, the real focus here is on two new protagonists: Skara, a deposed and recently orphaned princess; and Raith, bloodthirsty swordbearer to the legendary warrior Grom-gil-Gorm. Both characters are remarkably different to one another, yet both are extremely likeable, and I personally sympathised with both of them a lot more than I did either Thorn, Brand or Yarvi. Still, each and every character has a role to play, and when the full extent of certain characters’ involvement with the ongoing conflict is revealed it makes for a delightfully outrageous surprise.
The only aspect of the series I’m still not entirely convinced by is the notion of ‘elf magic’, which to me seems kind of shoehorned into Half a War given that it was only hinted at subtly in the previous two books (rather than made an integral part of the world as in Mark Lawrence’s Broken Empire). However, it does allow for incredible plot opportunities; and although I feel that the storyline involving the ruins of Strokom could perhaps have been fleshed out a bit more, I can’t deny that it results in some madly incongruous and awesome imagery (one particular scene involving the elderly Mother Scaer is both hilarious and terrifying, and will likely stick in my mind for a very long time).
Half a War is fast-moving and highly entertaining. It’s a fairly intense read, full of action and twists, and is led by sympathetic yet unpredictable characters who constantly surprise us with their decisions, eventually leaving us with an optimistic yet by no means fairytale ending. All in all, a stunning finale to a really enjoyable fantasy series. I would absolutely love to see more of the Shattered Sea in the near future.
(Review originally posted at halfstrungharp.com on 25th July 2015.)
Blurb
Words are weapons.
Princess Skara has seen all she loved made blood and ashes. She is left with only words. But the right words can be as deadly as any blade. She must conquer her fears and sharpen her wits to a lethal edge if she is to reclaim her birthright.
Only half a war is fought with swords.
The deep-cunning Father Yarvi has walked a long road from crippled slave to king’s minister. He has made allies of old foes and stitched together an uneasy peace. But now the ruthless Grandmother Wexen has raised the greatest army since the elves made war on God, and put Bright Yilling at its head – a man who worships no god but Death.
Sometimes one must fight evil with evil.
Some – like Thorn Bathu and the sword-bearer Raith – are born to fight, perhaps to die. Others – like Brand the smith and Koll the wood-carver – would rather stand in the light. But when Mother War spreads her iron wings, she may cast the whole Shattered Sea into darkness.