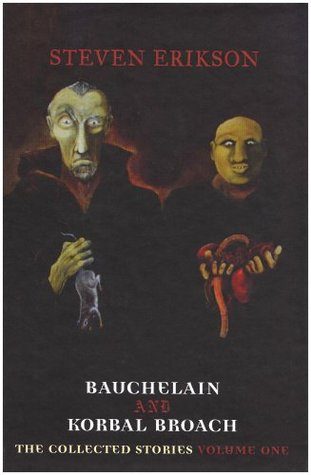 Bauchelain and Broach made their Malazan debut in the third book of the main series, Memories of Ice, in which they played a minor part in a battle outside the city of Capustan. There we were also introduced to their long-suffering manservant Emancipor Reese, and made to wonder just how ‘’Mancy the Luckless’ came to work for his unnatural employers. Blood Follows answers this question in the form of a darkly humorous tale detailing the origins of Reese’s unlucky alliance with Bauchelain and Broach.

Containing all the trademark Erikson features without the weight of a 1,000+ page novel, Blood Follows is a Malazan tale in miniature, a single piece of the colossal jigsaw puzzle that the full-length novels tend to comprise. As such it’s a tightly focused, fast-paced and brilliantly self-contained story, set on an obscure island and focusing on a handful of characters and their macabre involvement in a series of grisly murders. For this the setting of Lamentable Moll is perfect: a city whose houses and streets are built around and on top of hundreds of ancient (and occasionally haunted) barrows.

The novella introduces a cast of characters which is relatively small but also nicely fleshed-out in spite of the very short page count. The main players – both of whom are amusing and likeable – are Emancipor Reese, the aforementioned down-on-his-luck worker with an exceedingly demanding wife; and Sergeant Guld, top dog amongst the city watch but currently struggling with the pressure of hunting down a serial-killing sorcerer (or two…). As usual Erikson also manages to nudge on from the sidelines several awesomely bizarre supporting characters, some of whom are much more than they first appear.

It’s these little touches of weirdness and magic and humour that, for me, really make Erikson stand out as an author . . . and, of course, his ability to weave an intriguing tale leading to an exciting convergence no matter how limited the length of the story may be.

Blood Follows is a ghoulish, hilarious and thoroughly enjoyable Malazan outing that will beckon any reader (with its fat, white, delicate hand) to read more of these Bauchelain and Korbal Broach novellas.