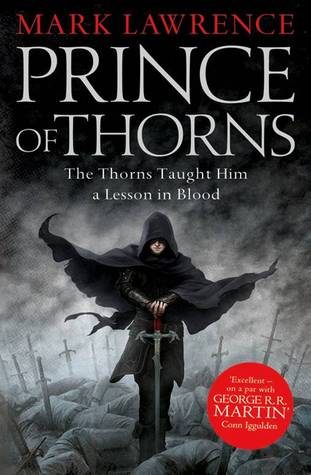 Let a man play chess, and tell him that every pawn is his friend. Let him think both bishops holy. Let him remember happy days in the shadows of his castles. Let him love his queen. Watch him lose them all.

Consider yourself warned: Mark Lawrence’s debut novel is not for the faint of heart. Prince of Thorns kicks off the notoriously dark Broken Empire trilogy, and readers should embark on Jorg’s journey fully prepared for blood, death and macabre humour of the kind one might find in the novels of Joe Abercrombie.

Right off the bat Lawrence throws us in amongst Jorg’s band of unscrupulous ‘Brothers’, who are not only looting and burning a village but also raping and murdering its inhabitants. (It’s at this point which many a reader has reached the firm conclusion that this merry tale is not to their liking.)

Some would say that such a controversial opening chapter risks alienating readers who are familiar with more traditional fantasy openings, and they’d be right. But although it’s risky, that single scene is more than justified by the fact that it cleverly conveys so much about Jorg and his companions more than justifies its casual brutality. Jorg Ancrath has witnessed (and perpetrated) all sorts of atrocities during his transformation from privileged prince to dangerous rogue. Now, he has to confront dark magic, the walking dead and childhood horrors if he’s to succeed in conquering the known world.

Personally, I enjoyed the way Prince of Thorns shattered my expectations, and left me full of questions about the Broken Empire (some of which I’m still waiting to be answered!). Though the opening events well and truly hooked me, it’s the prose that sustained my interest throughout the rest of the book’s early chapters; Lawrence’s narrative style is a wonder to read. The narrator’s voice is distinctive, captivating and intriguingly changeable in line with Jorg’s raging internal conflict.

Jorg appears to be inhumanly detached from emotions (his own, and others’) to the extent that he’s essentially incapable of empathising with anyone around him. Alternately cold, hard, sarcastic, deadpan, humorous – none of these facets of the character are particularly likeable. However, it becomes clear that this is (to an extent) more a persona than a personality; and, while Jorg is clearly ignorant of what is happening to him, we as readers are able to recognise and appreciate the gradual emergence of compunction and sympathy. It’s a subtle development, but one which proves that characters don’t always have to be sympathetic to be engaging.

One minor gripe about the book is that I wish it included more of the Brothers than just the occasional entertaining anecdote or one-liner between chapters. Jorg might not care much about his Brothers, but I wanted to know more about what makes them tick. (Thankfully, Lawrence’s aptly-titled Road Brothers anthology goes a long way towards addressing this… though to my shame I haven’t read it yet.)

In a nutshell, then: Prince of Thorns is a dark novel, but not as dark as others would have you believe. The characters are entertaining, the world is fascinating, and the imagery is vivid and staggering. Many readers find themselves alienated by the beginning, but many more have (like me) read right to the end (three times!) and still come back for more.

FYI: The original review was posted at halfstrungharp.com on 18th September 2013. It was the second review I ever wrote – and Mark was the first author I ever interacted with on Twitter!