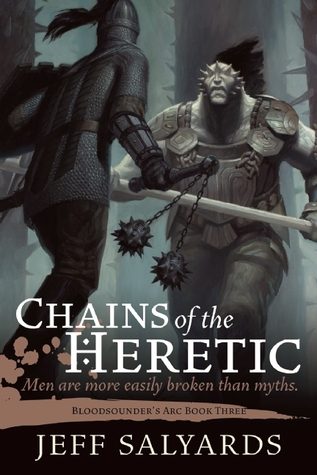 Chains of the Heretic is the spectacular denouement to a spectacular (-ly underrated) series, each instalment of which is more thoughtful, more entertaining and more accomplished than the last. Salyards really hit his stride in the second half of the trilogy, and the momentum he’s built so far – carefully rolled into motion in Scourge of the Betrayer, then gaining traction in Veil of the Deserters – hurtles right through into book three like an unlikely boulder in a Tomb Raider game.

Just like Veil, Chains picks up right where the previous book left off. The end is in sight for our endearing protagonist Arki, but he still has a long way to go before he completes his journey from insular local scribe to inured military chronicler. The road he travels is rougher and more dangerous than ever before, but so is Arki. His own resilience, as well as the company he’s kept, have shaped him into a slightly older, wiser and stronger version of himself; and there’s no question that the Arki in this book is somehow more than the Arki we met back in book one.

Earlier in the trilogy Arki was pathetically grateful when the Syldoon first began to (grudgingly) toss scraps of knowledge and kindness in his direction – as though Arki were a barely-tolerated mongrel and their non-abusive words, bones. These scant personal victories provided rare clues that helped us first begin to unravel the layers of posturing, and so we the reader were just as grateful as Arki for these little titbits of information.

And then time passes, group dynamics change, and sympathetic gestures and enlightening conversations start to become more frequent (though still far from the norm). This inevitable yet somehow surprising development takes place whilst Arki himself – partly due to his sheer persistence in the Sisyphean struggle to win over his new employers – surpasses the Syldoons’ (admittedly low) expectations, earning himself a healthy measure of respect along the way.

It’s impossible to identify exactly when Arki makes this transformation – from hindrance to help, from awkward servant to inept-but-determined ally – because the process is so gradual and subtle. But there’s no doubting that some of the hardest bastards in the Syldoon empire now look upon little Arki as a friend and confidante, and others, as more than a friend (wink, wink). It’s incredibly satisfying to see Arki grow in confidence; to watch as he earns the right not only to question men who he once feared but also to boldly banter with the best of them. Arki is no longer someone we feel sorry for, but someone who we admire; no longer a cowering dog but a steadfast jackal.

Sometime during Veil of the Deserters Arki crossed an intangible line, after which the Syldoon ceased to be “them” and instead became “us”. But there’s far more to it than simply becoming ‘one of the lads’. With familiarity comes the weight of responsibility; and Arki’s tacit acceptance into the company brings moral crisis and a nagging sense of culpability for the Syldoons’ violent actions. On the other hand, as Arki adapts to his surroundings, so too are the other characters subtly transformed through their interactions with the curious and well-meaning scribe. It’s true that these tough-as-nails soldiers are nearly as reluctant to volunteer information about themselves as they would be to stick their arm inside a ripper’s cage; but Salyards gives the impression that they wouldn’t be sharing their secrets at all if it had been anyone except Arki who’d asked for them.

Even so, the Syldoon aren’t exactly brimming with revelations. This is partly because they’re well-rounded and realistic secondary characters as opposed to bog-standard RPG-type henchmen. Salyards doesn’t bombard us with endless side quests, and refrains from trying to shoehorn Arki’s companions’ tales into the story. Instead, each subplot branches off from the main events of the Arc to flourish or to die elsewhere, or else lie unresolved beneath the surface of future conversations. By not involving Arki in these subplots any more deeply than he absolutely needs to be, Salyards creates the illusion that every character’s life is just as independent and complex as anyone else’s, both on and off the page – yet another detail that adds another layer to this series’ foundation of realism and depth.

Prospective readers of Bloodsounder’s Arc should be aware that, thanks to the ‘real time’ first person narrative, they’ll quite literally spend every moment with this same close-knit group of characters, and I’ll not deny that there are times when the campsite conversations start to feel a little too familiar, the drawn-out explanations of history and lore somewhat repetitive, and the company’s road banter ever-so-slightly predictable. But such things can be easily overlooked as long as the characters are compelling, and dark fantasy rarely spits out any who are more compelling than Salyards’ Syldoon. Coarse but clever, dangerous yet loyal, they thunder into being and charge off the page. After which they grab you by the throat. Then use their free hand to punch you in the balls.

Small wonder Arki’s changed after spending months surrounded by abrasive and foul-mouthed companions (whose crude banter is a continual source of amusement – and sometimes violence!). But beneath the jokes there lies a surprisingly strong undercurrent of pathos poignantly reminiscent of that which accompanied the closing moments of Scourge of the Betrayer. The author manipulates mood using means both subtle and understated, just as he does with a great many other aspects of Bloodsounder’s Arc. For example, Salyards creates unique settings, awe-inspiring mythologies and a plot that is stunningly epic and original, and essentially uses them as tools with which to hone and develop his protagonists. This clever inversion of form – using events that, as they escalate, work to enhance rather than dilute the focus on humanity – ensures two things: that Arki and the other characters remain front and centre at all times; and that the story retains the intimacy and immediacy that has set this entire trilogy apart from the very beginning.

I’ve said before (many times) that this surprisingly subtle, occasionally meandering series also happens to boast some of the most brutal, tense and realistic combat scenes I’ve ever read – and Chains of the Heretic is no exception. Blow-by-blow descriptions, fallible weapons, dodgy armour, long-term injuries and unlucky timing. I raved about the exquisiteness of Salyards’ fight scenes when I reviewed both Scourge of the Betrayer and Veil of the Deserters, and don’t wish to bore anyone with repetition. Suffice it to say that Chains takes everything – everything – to the next level with its larger-than-life anti-heroes, settings both bizarre and beautiful, and an increasingly brutal body count.

Essentially, the entire Bloodsounder’s Arc is one huge book that just happens to be split into three parts. Neither part makes sense without the others, nor is the story – or the experience – complete until you’ve read all three books. You might be thinking, ‘well, obviously – it’s a trilogy, numbnuts.’ And you’d be right. But what I mean is that, at its heart, Arki’s journey – as a writer and as an individual – is also Salyards’ journey. Every novel that has ever existed is a labour of love, time and dedication; but there’s something incredibly rewarding, not to mention personal, in witnessing a debut writer’s very own arc from the uncertainty of their first novel through to a finished work of art.

And make no mistake: Bloodsounder’s Arc is a work of art, a dark and masterful tapestry of tension and momentum wherein each word weaves a more deftly spun strand than the last. The final triptych, Chains of the Heretic, is Salyards’ pièce de résistance, falling naturally but devastatingly into its place as the boldest and most brutal piece of the saga.

I’d be hard-pressed to describe Chains of the Heretic as a ‘happy’ ending to the series, but it’s certainly a satisfying one. Which is fortunate, since Salyards has made it clear that while he may eventually return to the world of Bloodsounder he has no immediate intention of doing so. Rumour has it that he’s currently working on something radically different to the Arc: a fast-paced urban fantasy/SF novel set fifty years in the future and tentatively titled Grimoire Zero.

In the meantime, those who are desperate for more Bloodsounder will want to check out Salyards’ short story contributions to the anthologies Neverland’s Library (Ragnarok) and the forthcoming Evil is a Matter of Perspective (Grimdark Magazine). In fact, I urge you to do so.

[Check out the full original review over on Fantasy-Faction.com!]