‘The Black Company’ by Glen Cook 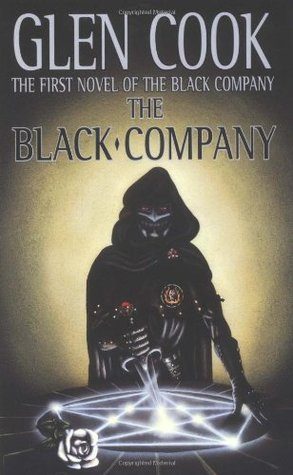 The Black Company is narrated through a single PoV: Croaker, a physician and annalist working for a mercenary force called – you guessed it! – the Black Company. The Company have been hired by The Lady (an ancient tyrant) who along with her monstrous generals (twisted supernatural beings known as the Ten Who Were Taken) is intent on defeating the Rebel armies and ruling all the known lands (obvs).

Cook’s writing style is not exactly immersive. While I would call it refreshingly blunt, others might (and often do) dismiss it as jarring and curt. The Black Company‘s brusque prose and terse descriptions – not to mention the author’s casual tendency to skip over major events in the spaces between paragraphs! – lend even major scenes a “blink and you’ll miss it” kind of urgency. This is a somewhat disorientating stylistic choice, but it’s one to which I quickly became accustomed.

I think The Black Company is the first example of ‘GRIMDARK’ fiction I ever read (closely followed by Joe Abercrombie’s The Blade Itself). In fact, I still recall the thrill of reading it for the first time and getting to grips with the fact that this Cook feller had written an actual book about actual mercenaries who are actually fighting on the side of the bad guys. Nowadays, of course, grimdark tales are a dime a dozen. But back then, I’d never encountered anything of the kind. In my experience, fantasy protagonists were heroes. Young wizards. Daring hobbits. Chosen ones. Protectors. Guardians of humanity. Good guys. In stark contrast, Croaker and the rest of the Black Company are entirely motivated by greed and selfishness – at least to start off with. This, I soon discovered, made them just as entertaining as Harry, Ron and Hermione; as Eragon and Murtagh, and the Fellowship of the Ring.

And the characters aren’t the only selling point. Cook has also created a grim, eerie and satisfyingly dark world, which he establishes primarily by dropping carefully offhand hints about the Taken. With evocative (if slightly unimaginative) names like Nightcrawler, Soulcatcher, Moonbiter, Bonegnasher, The Howler, and The Hanged Man, the Taken lurk threateningly on the periphery where, shrouded in mystery, these monstrous creatures add an extra thrill of horror to the already ominous atmosphere.

The Black Company is also packed full of action. However, and most of it happens to be tersely described from a distance. While this befits the premise of Croaker as annalist (think Duiker in Deadhouse Gates), unfortunately it does at times feel like little more than a dull, dry listing of distant events. Furthermore, much of the action is disappointingly hampered by apparent numerical inconsistencies. For instance, although Cook informs us that the Black Company has hundreds of members he only ever lets the reader meet a handful. This wouldn’t be a problem… except that the others are barely even mentioned except when Croaker infrequently refers to the Company as a whole. It’s difficult, therefore, to reconcile that initial image of a small group of mercenaries with the massive force we’re suddenly shown later in the book.

And even the climax fell a bit flat, with Cook repeatedly telling us that the battle involves over 250,000 combatants – yet never quite succeeding in conveying the true scale of the conflict.

One final issue. Every writer knows that the biggest challenge with first-person narration is finding pretexts for the protagonist to witness and (ideally) participate in key events. Cook’s pretexts for getting Croaker in the thick of things – which essentially boil down to ‘get sent on special missions by the Lady again and again, despite not being one of the most skilled fighters in the company’ – are a bit flimsy to say the least.

Still, The Black Company is the progenitor of some truly stellar military fantasy by the likes of Steven Erikson and Jeff Salyards. While it’s a bit iffy to begin with, it soon books its ideas up, and is perfect for fans of the grimdark genre.