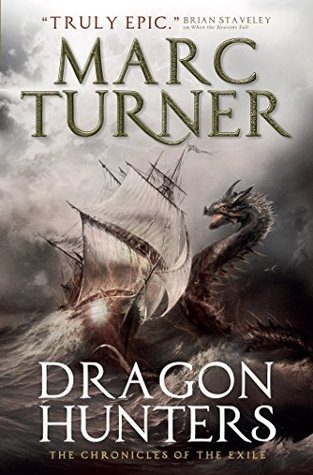 Dragon Hunters is the exciting second instalment in Marc Turner’s Chronicle of the Exile, which is rapidly becoming one of my favourite fantasy series of recent years.

Dragon Hunters is thoughtful, hilarious, and even more entertaining even than its predecessor. Turner once again demonstrates a master’s grasp of the slow-build: he pulls each separate character’s story arc steadily and irrevocably into the central conflict, then flings obstacles at them whilst pushing them irresistibly towards one another in an epic, action-packed convergence.

The four main PoVs in Dragon Hunters are all compelling in their own ways. That said, it’s easy to pick a favourite (or two): Karmel, a naïve but feisty Chameleon priestess; and Kempis, a jaded Storm Guard with a healthy lack of respect for authority . . . and a somewhat laid-back approach to upholding the law. The secondary characters are no less intriguing, and I for one look forward to learning more about Mazana Creed, Caval, Mili and Tali in future books.

In my review of book one, When the Heavens Fall, I mentioned how skilfully Turner managed to  convey the sheer scope of his Lands of the Exile without going overboard with the details. He achieves the same thing in Dragon Hunters, painting a mysterious backdrop of unknown elements – titans, old ruins, dragons, water magic, stone-skins – without elaborating overmuch. In doing so, he creates the impression of a terrifyingly vast amount of history and unknown lore that’s just straining to burst into the story and cause untold chaos. (And he does all this without the use of info-dumps, and without straying from the main plot very much at all.)

I can say for sure that Turner’s second book feels much more accomplished than his debut (which was nonetheless excellent). The entirety of Dragon Hunters feels much more cohesive than Heavens: right from the start I had the impression that all four main characters were going to converge at some point, and I enjoyed accompanying them on their various journeys. New readers may want to consider using this book as an entry point to Turner’s work: Dragon Hunters takes place in an entirely separate part of the Lands of the Exile than the first book, and can actually be read and enjoyed without any prior knowledge of the series. However, certain subtle hints and sly mentions add an extra layer of fun that only readers of the first book will be able to appreciate.

Regardless of whether or not you’ve read the first book, I’d highly recommend Dragon Hunters to any fantasy fan who enjoys irreverent protagonists, wry humour, epic worldbuilding and mercurial politics.

‘Emperor of Thorns’ by Mark Lawrence