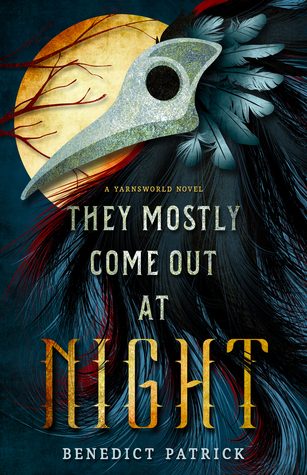 This review originally appeared on Fantasy-Faction on 20 January 2017.

I myself have been desperately enamoured with Benedict Patrick’s debut novel since I first laid eyes on its cover last year. Jenny Zemanek did such a stellar job of its design that They Mostly Come Out at Night came joint-second in the SPFBO2 cover contest (ahead of 297 others!), tying with Timandra Whitecastle’s Touch of Iron and losing out by only two votes to Michael Miller’s The Dragon’s Blade.

To Patrick, it must seem as though he’s cursed to always be the ‘almost’ winner: They Mostly Come out at Night seriously impressed SPFBO judge Sarah Chorn of Bookworm Blues (who called it ‘delightfully weird’ and ‘completely unique’) in the first round, but once again missed out on becoming a finalist by a hair’s breadth. (In case you’re wondering, Sarah’s finalist was Fionn: Defence of Ráth Bládhma by Brian O’Sullivan, which I also reviewed for Fantasy-Faction not too long ago).

But ‘not winning’ is by no means the same as ‘losing’. In an industry where a hundred thousand subjective tastes blend (and clash…) to determine the overall ‘quality’ of a piece of writing, success is not easily quantified. Is success at the Olympics defined only by who took home a gold medal? Of course not. There are all sorts of other considerations: age; level of experience; personal circumstances; even the conditions on the day of the event. Likewise, as patronising as it sounds, there are many, many authors who’ve entered the SPFBO and emerged as ‘winners’ regardless of where – or even if – they placed overall. And Benedict Patrick is one of them.

I’ve said before that self-published novels are judged using different standards to others; that reviewers are much more likely to consider and comment on details such as cover art, copyediting, and even typesetting. Unfair as this seems, it does help the average potential reader to easily distinguish the naff from the good . . . and the good from the great.

Let me assure you that, in all respects, They Mostly Come out at Night is as professional a book as you’ll find in today’s market, regardless of platform or publisher. Layout, design, cover, editing – every technical aspect is stunningly sharp, from the precise detail of the chapter headings to the bold, striking cover art. I’m sure readers will agree that such accomplishment deserves to be not only acknowledged, but spotlighted too.

In fact, while we’re here, can we just take a moment to appreciate the gorgeousness of *that* cover?

Impressive as it is, though, a great cover means very little without a great story to accompany it. Is Benedict Patrick’s sexy-looking debut actually all fur coat and no knickers?

The short answer is ‘hell, no!’ The long answer is that Patrick’s story is as superb as its cover is stunning; that such a fantastic debut deserves nothing less than to be as beautifully presented as this one has been.

At first glance, the conflicts within the story seem ridiculously simplistic; the protagonists, frustratingly obtuse. The author also quite often presents his story in a manner that is far more ‘tell’ than ‘show’, which some will doubtless find fault with. However, discerning readers will soon realise that all of the above are, in fact, very much deliberate. That the narrative is crafted to sound like a bedtime fable is a clear (and fitting) stylistic choice – and a skilfully executed one, too, hidden as it is behind the ‘actual’ fairy tales that appear as interludes between the main PoV chapters.

Dark as they are, these interludes are told in a manner that somehow manages to be wry, and eerie, and endearing – all at the same time. Though some are less sinister than others, these fairy tales have more in common with the Brothers Grimm than Walt Disney. The Magpie King and Artemis the trickster feature heavily in the stories, which are not only cunningly placed but also much more significant than they first appear.

Most importantly, They Mostly Come Out at Night managed to do something that, for me, very few other fantasy books ever have: it incites fear without being ‘scary’. If you were to ask me which other books left a similar impression on me throughout my reading life, I’d easily be able to give you just two: The Painted Man by Peter V. Brett, and Sabriel by

Garth Nix. For me, no other author has managed to truly capture that sense of danger in the night; of terror at sunset’s approach, and an atmosphere stained with that deep-rooted and pervasive fear of the dark. Reading Patrick’s tale of monsters and Magpie Kings marked the first time in years that I’ve experienced that primal dread, that familiar foreboding – all without ever feeling as though I’d crossed from the realms of fantasy into horror.

The very first entry in Patrick’s darkly fantastical Yarnsworld universe (which he expands further in his second book: Where the Waters Turn Black), TMCOAN is a standalone novel that wraps up in a surprisingly tidy fashion . . . though anyone seeking a typical fairy-tale ending should look elsewhere. Nonetheless, it’s a satisfying denouement and a strong conclusion to a debut that is as gripping as it is unique. Patrick writes with imagination, skill and confidence, and it’s clear that They Mostly Come out at Night is the beginning of something brilliant.