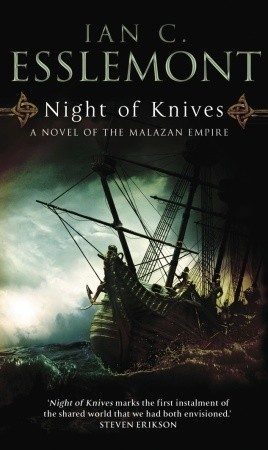 Night of Knives is the first of Ian C. Esslemont’s Malazan Empire books (intended to be read alongside Steven Erikson’s Malazan Book of the Fallen).

Erikson and Esslemont co-created the incredible world of Malaz over thirty years ago; seeing as they’re writing about the same world and characters, I don’t think it’s at all unfair to directly compare the two.

Except that, sadly, there is no real comparison.

Set several years prior to Erikson’s series, Night of Knives tells of an event that has hitherto been only mysteriously alluded to: the night the Emperor disappeared. It’s a great idea for a novel, and the actual story itself is quite nicely self-contained, set as it is over the course of a single night. Unfortunately, there’s something about Esslemont’s writing that makes this short novella feel like a real slog. The plot is slow and clumsy when it should be fast-paced and exciting; the settings are flat and repetitive when they should be evocative; and the characters are distant and passive when they should be sympathetic and engaging.

Esslemont conveys the events in Night of Knives through the eyes of two major POV characters. Kiska is a local-born thief, while Temper is a former bodyguard of the great Dassem Ultor (another legendary figure name-dropped throughout the main series). Though neither of these characters is dislikeable, still I felt a complete lack of connection with Kiska, and had only marginally more sympathy for Temper due to the few flashbacks granting us a little of his history. Esslemont’s characterisation is far from subtle, with Kiska coming across as an irritating, self-centred youth, and Temper’s every action seemingly completely contradicting his thoughts. I found that I had no idea what either character was going to do next, and even less idea of whether or not I cared.

I think one of the main problems regarding the characters is how little they actually do. Characters from the main series such as Tayschrenn and Temper seem to spend most of the story acting like curious bystanders rather than major players and, while it’s nice to see them given more page time here, they seem to have no real impact on the plot itself. Even Kiska spends pretty much the entirety of the book reacting to events rather than participating in them. This sense of passively witnessing proceedings, rather than actively instigating them, is perhaps one reason why Night of Knives doesn’t feel particularly engaging: though Esslemont scrapes together a nice (if somewhat feeble) air of tension, most of the real action happens off-screen; as such, the characters – and thus the reader – seem to be of little importance in the night’s events, and have even less at stake in their outcome.

And it’s not just the characters I had issues with. I also felt the pacing of events to be a little ‘off’, with the much-anticipated climax occurring off-screen only to be followed by another series of events with yet another climax. These final events involve a vague subplot comprising an Azath house and a magical attack on the island, the significance of which is never made entirely clear.

In fact, the latter half of Night of Knives feels similarly bewildering – as though two separate stories have been shoehorned together. This confusion is exacerbated by the heavy presence of ‘dark figures’ and ‘men in cloaks’. In these instances, Esslemont’s use of noun phrases rather than names meant that I sometimes had difficulty keeping track of who was who and just what the hell was going on – particularly during the recurring conflict between the Claw and the shadow cultists.

However, it’d be unfair to say that there are no positives to be found in Esslemont’s debut novel. For instance, I really enjoyed the extended flashbacks involving Temper’s time in Y’Ghatan: these segments reveal a lot about events that have so far been only cryptically alluded to in the main series, and provide a nice bit of backstory for Temper’s character. Bewilderment aside, the novel as a whole actually improves as it progresses, and the author evokes some pretty striking imagery (mystic ice-bound beings, fog, darkness and shadow, monstrous hounds, undead) to create a haunting and eerie atmosphere.

So, the premise of Night of Knives is fairly solid, and its resolution fairly satisfying.  The entire concept of the novel – set on a single night, on an ice-besieged island, during a Shadow Moon – is awesome. It’s just a shame it’s so awkwardly executed, and that the presenting of circumstances seems so painfully contrived (what are the chances an ‘unpredictable’ Shadow Moon would just happen to occur on this night of all nights?). Moreover, I find myself left with a lot of questions, such as: Why is Temper so desperate to involve himself in the night’s events when his current mission in life is to remain under the empire’s radar? What exactly is a Shadow Moon? Why are they so unpredictable, how do they work, and why are they never mentioned in the main series? Who is Agayla? Who was the old man in the fishing boat? Who was the old man in the pub? What was that vague mention of a prophecy all about?

Why couldn’t Steven Erikson have written this book instead?

Review: ‘Scourge of the Betrayer’ by Jeff Salyards