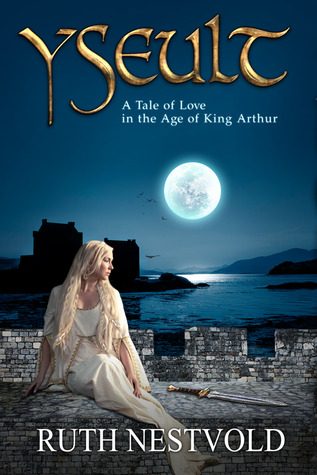 Yseult reached the semi-finals in the 2nd annual Self-Published Fantasy Blog-Off. This review was originally published on Fantasy-Faction on 31st August 2016.

A Tale of Love in the Age of King Arthur. A fitting subtitle, but in general one that is likely to discourage more readers than it attracts.

Romance in fantasy is a contentious issue. Lots of readers (myself included) are relatively indifferent to it, and neither seek it out nor avoid it. On the other hand, I’ve seen many an online discussion on the topic in which the majority of comments fall into two categories: ‘love it’ and ‘oh dear god MY EYES’. And this is a real shame, because it means that the latter will always miss out on well-written, beautiful stories such as Yseult.

Ruth Nestvold’s retelling of Tristan and Isolde is a solid adaptation that manages to capture the mischief and high spirits of Béroul’s original translation, as well as evoke a convincing sense of Arthurian Britain. From the humble roundhouses of Eriu to the dramatic promontory of Dyn Tagell, Yseult is rich in vivid settings that draw us in and anchor us firmly in the characters’ place and time.

Nestvold’s writing has a charming quality, suffused with the quiet confidence of long familiarity with her characters and the world in which they play. The tone and style – along with the carefully-researched druidic, Celtic and Roman place names – sound authentic but not archaic; and while I did find myself a little bewildered at times (particularly at the start!) the wonderfully comprehensive glossary quickly cleared up any confusion.

Another aspect of Yseult which I admire is the skillful way the author maintains a cohesive timeline – without feeling the need to fill in all the gaps. The first section in particular is very well structured, cutting between important scenes with minimal disorientation; and the epistolary-style segments are a nice way of bridging the later chapters in a way that avoids repetition and unnecessary detail. On the whole, the pacing is similarly controlled, though some of us felt that it was perhaps a little *too* languorous in places. This, along with the occasionally ponderous prose, was the main issue cited by those of us who struggled to engage with Yseult. In fact, it was the only real sticking point on which we just could not seem to agree!

Speaking for myself, the issues I had with the book arose from what I perceived as unevenness. The entirety of part one – which is excellent, by the way – centres on the trials and inner strength of Yseult’s mother in addition to the childhood and adolescence of Yseult herself. So when the fabled romance finally began in part two I was somewhat taken aback by the way it was presented. It begins sweetly, and is interwoven with other events that keep the story rolling. But when our two protagonists finally get frisky, the frequent use of (for example) words like ‘ass’ and ‘cock’ when describing sex scenes felt jarring and not at all consistent with the subtle character development, beautiful Irish words and mellifluous descriptions to which I’d become accustomed.

Not only does it feel as though the sex scenes were written by a totally different author, the story itself seems less compelling the more it focuses on Drystan and Yseult. In fact, I almost abandoned the book at one point: despite thoroughly enjoying part one, I began to find the story tedious. Increasingly frequent repetition – particularly the author’s fixation with describing Yseult’s ‘moonlight’ hair and Drystan’s ‘forest-green’ eyes – started to really grate on my nerves. But it wasn’t until I reached the 44%-mark that I realised – with much disappointment – I just wasn’t enjoying Yseult enough to justify continuing with it.

Thankfully, I went back to it a few days later; and after a bit of perseverance I started to realise that Nestvold’s ‘tale of love’ encompasses far more than ‘just’ romance. Each and every character is motivated by different kinds of love, sometimes simultaneously and often conflicting. Yseult finds herself torn between her romantic love for Drystan and filial love for her mother, cousin and son. Marcus is motivated by self-love; Kurvenal, by platonic love for his best friend. Arthur is driven by love for his country, and everywhere deeds both good and evil are committed in the name of love and loyalty to one’s religion.

On the whole, Yseult is strongly reminiscent of Mary Stewart’s fantastic Arthurian Saga: a patient, introspective narrative that concerns itself mostly with magic, politics and belief. Nestvold takes the same murky time period, adds a familiar legend and then remoulds it with enough creative flourishes to make it feel fresh and original. The author develops her characters well (although antagonists such as Marcus and Andred are too-quickly painted as unsympathetic villains) and makes sure to give them and her readers a suitably poetic send-off at the last.

The Verdict: After reading a swathe of SPFBO entries that tended more towards the traditional/epic we found this historical fantasy to be a rather captivating change of pace. However, while we all agreed it was well written, not all of us found it engaging. We acknowledged that others’ opinions would likely differ as vastly as our own, which is why we’ve made the decision to eliminate Yseult in favour of others with the potential to appeal to a broader audience.