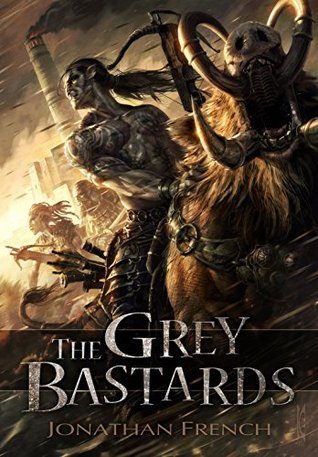 The Grey Bastards is one of ten novels in the final round of Mark Lawrence’s Self-Published Fantasy Blog-Off (SPFBO) 2016. The review was originally posted on Fantasy-Faction on 31st December 2016; updates on the contest’s progress can be found here.

I have a bone to pick with you, Jonathan French, aka. author of The Grey Bastards. You, sir, owe me a great many hours of sleep; hours that were spent avidly following the grim adventures of Jackal and co.

Mr. French, the pacing of your novel is truly brilliant. Starting with a ‘bang’ and then racing from conflicts and schemes to plot twists and battles, Bastards is what one might call a ‘rip-roaring adventure’: brutal, brave, and utterly fearless. The chapters are long, yet each end in a way that compels you to continue reading. Not since Dyrk Ashton’s Paternus (Fantasy-Faction’s very own chosen finalist) have I devoured a SPFBO book so
eagerly.

Electing to tell the entire story through Jackal’s PoV is another engaging piece of trickery. As you’re clearly well aware, Mr French, keeping the reader invested in one character not only raises the stakes whenever he is in danger but also makes the book a journey of discovery for both protagonist and reader. In a genre dominated by sprawling, multiple-pov sagas, Bastards’ singular focus on one part of the world (and your protagonist’s place within it) is refreshing and exciting. Bravo, sir!

However: in some ways The Grey Bastards is an uncomfortable read. Did you know, Mr. French, that the word ‘fuck’ appears in your novel a total of 230 times? And ‘shit’, 69 times? Why is she even mentioning this? you might be wondering; after all, Hughes is usually the last person to be offended over a bit of bad language! My fellow swear-brother T.O. Munro observed not too long ago that ‘cussing and expletives are a fact of real-life and fantasy reading and writing should reflect that’. I happen to whole-heartedly agree. But I suspect that in this case, Mr French, there will be many others who don’t. Here’s why.

The word ‘quim’ appears 19 times. The word ‘cunt’, 12, and ‘cunny’, 6. Those under the impression that misogyny is exclusively the domain of men will no doubt label this phenomenon simply as ‘testosterone’. But even considering that 80-90% of the characters are male (or swine…), this is a whopping amount of misogyny (and vulgarity) for one book. And yes, even I took exception to it at first.

However, as the story went on and I became inured to the language I realised with a jolt that perhaps this is what you were trying to do all along. By involving the reader so thoroughly in the half-orcs’ vernacular that it becomes natural to us you make us unwittingly complicit in their worldview. And the moment we realise this, the more we come to understand the ‘mongrels’ and to notice that some characters use these terms less broadly than others. While many wield the word ‘quim’ about as naturally as an elderly person uses casual racism (by which I mean as a harmful yet unconscious product

of their upbringing), others use it much more aggressively, either as an insult or as a way of deliberately demeaning certain individuals. Either way, such ingrained chauvinism is shocking . . . but it also tells us a lot about the nature of certain characters. And the rare moments of its absence also happen to be an excellent way of highlighting honourable actions that would otherwise have gone unnoticed by us.

The fact is, Mr French, your half-orcs have entirely different values to your readers. In many cases, these differences will be irreconcilable, and no doubt many a reader will criticise the book for its rampant and unforgiveable misogyny. To these readers I would simply say: well, what on earth did you expect? But I’d also encourage them to read on; to read between the lines, and to reserve judgement until the story is done. Because while the bigger picture changes very little, the ways in which it has changed are crucial. Subtle, even.

I’ll admit that ‘subtle’ is the last word I’d expect to see used when referring to a book featuring a hog-riding half-orc on the cover and emblazoned with the title ‘The Grey Bastards’. A book that, even for me, felt like entering some exclusive boys’ club, one where I wasn’t forbidden but neither was I welcomed. A book that is saturated with derogatory terms for women, and with characters who view women as little more than ‘walking genitalia’ (as Adrian aptly pointed out in their review on Bibliotropic). However, the initial sense of being ostracised vanishes within just a few pages. I daresay that no reader can refuse Jackal’s honest charm, or that of his companions Oats and Fetching. And the Kiln wasn’t built in a day; likewise, reform – of any kind – takes time, and every step is a step in the right direction.

To sum up then, Mr. French: I envy and admire you for this story you’ve crafted. Bastards is brutal. Bastards is brave. Bastards is utterly fearless and unashamed of being what it is. I greedily await more from Jackal and co., and fully intend to hound you for news about the hoof – a truer set of bastards you’ll never meet. I notice that you have a couple of other books available for purchase (at a very reasonable price, I might add) and I look forward to sampling these while I wait impatiently for you to take me back to the Lots.

For now, though, I’d like to raise a floppy tankard to The Grey Bastards’ brilliance. It’s the least I can do after such a satisfying ride, and I’m confident I won’t be the only SPFBO judge who does so

Danse in your birthday suit!