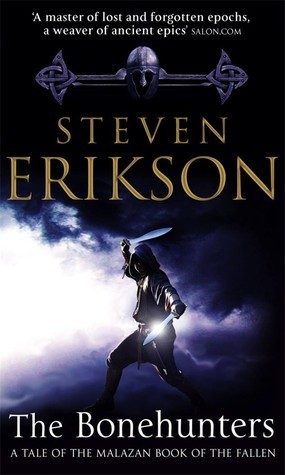 I’ve been accused – on many occasions – of harping on about the Malazan Book of the Fallen. I hear things like, “god, do you EVER shut up about it?” And, “if I promise to read the first one, will you please, PLEASE leave me alone?” And, “oh my god, you’re in my house WHAT ARE YOU DOING IN MY HOUSE YOU CRAZY BITCH PUT THE BOOKS DOWN I’M CALLING THE POLICE,” etc.

And really, no one needs that kind of negativity in their life. Just like I don’t need to spend the night in a prison cell, rocking back and forth as I draw on the Warren of Mockra to convince myself that missing out on the greatest epic fantasy series of all time is punishment enough for these nay-sayers.

But since that hasn’t really got me anywhere, I finally decided to take a stand. And so: what do I say to these nay-sayers? I say NAY! And—

Prison guard: “You know what I say?”

Me: Shh. Trying to do a thing here.

Prison guard: “Right. But what I was going to say is that you’ve only got two minutes left.”

Me: Eh? Two minutes? What the hell, woman?

Prison guard: “Well, you clearly have no idea how prisons actually work. And since you seem to be picturing it as some sort of internet café I’ve decided to impose a time limit. Of which you now have one-and-a-half minutes remaining.”

Me: That’s not fair–

So. The Bonehunters is the sixth of ten books in the Malazan Book of the Fallen. And – surprise, surprise! – it’s amazing.

Way back in book one we were introduced to the series via the Bridgeburners: a well-regarded military faction characterised by the colourful and familiar relationships between its veteran members. Fast-forward to book four and we had something totally different, namely a hefty focus on the struggles of a different, newly-formed army in imminent danger of imploding after being robbed of the opportunity to prove itself.

We return to this army in The Bonehunters. Lost and angry, we witness as it struggles through yet another disastrous conflict and endures yet more drawn-out and difficult assignments. Best of all, we get to watch as its core companies are transformed, forged in the fires of fighting and fear.

As always, Erikson effortlessly instills his characters with realism, humour and pathos: nobody is perfect in Erikson’s world, especially the so-called heroes. Male, female, human, Jaghut, priest, soldier, god; all races and individuals have flaws that are just as unique and varied as any other feature of their personality. Some gods are burdened beneath guilt or self-doubt, while the arrogance and pride of others practically begs for a well-timed moment of hubris. An undead warrior from a civilisation that ended thousands and thousands of years earlier demonstrates more compassion for the living than the mortals against whom he fights. And it goes without saying that there are errors in judgement by all parties: Erikson knows better than anyone where good intentions sometimes lead even the best of us.

Much as I loved the brand new cast of characters in book five, The Bonehunters‘ return to the Malazan 14th Army was like being reunited with old friends. Moranth munitions, battlefield humour, bickering marines and unpredictable warrens – Hood’s breath, it felt good to be back. I’ve always felt that the Malazan marines are not only the backbone but the lifeblood of this series, and nowhere has that been more evident in my re-read so far as it is here.

That’s not to say I don’t love the rest of the (insanely enormous) cast: no matter who we’re reading about, you can guarantee that the prose, dialogue and descriptions will be beautifully understated and subtle (for the most part). Different groups – the marines, the Tiste Edur, the Imass – each have their own distinctive way of speaking. And it’s the same for individuals, such as Karsa Orlong and Samar Dev. With inspired pairings like these Erikson hardly ever needs to use speech tags, because the reader instantly recognises which character is talking. This even goes for certain minor characters – Iskaral Pust, for example, and Kruppe too – whose clever and humorous monologues ensure that they’re some of the most memorable and easily recognisable folks, not just in The Bonehunters but in the entire series.

Yep, as far as dialogue is concerned you’ll find no infodumps here. Far from it: Erikson’s characters don’t give a flying fuck about the reader. Sure, they’ll let us listen in on their conversations… but they’d rather crawl over a bed of cussers than make it easy for us to understand. We’re encouraged to piece things together by ourselves as we read, which makes for much more authentic-sounding conversations between characters.

In fact, it never ceases to amaze me that Erikson can convey so much through just a few lines of dialogue . . . even if you don’t necessarily catch it all on the first try. This refusal to spoon-feed the reader tends to alienate many people very early on in the series, which is a real shame. Yes, it does mean that we sometimes have to work hard to make connections between events and characters. So what? Using your noggin is good for you every once in a while. And even better, the sheer scale of the expanded (and expanding!) Malazan series – which I believe currently stands at eighteen novels and six novellas – means that no matter how many times you re-read it, you’re guaranteed to pick up on something new every single time.

Me: Wait. Wait! One more paragraph, then I’m done. I swear.

Prison guard: *raises eyebrow, then nods reluctantly and holds up one finger*

Me: *grins, nods back maniacally*

Right. Last bit, I promise. I can’t go without mentioning that The Bonehunters boasts not one but TWO of the most epic sequences in the entire series. I can’t even begin to express how spectacularly tense and claustrophobic are the scenes spent crawling through tunnels beneath a destroyed city; and never in a million years would I be able to put into words just how much the flight through Malaz City during the finale made my heart race. Just… everything about this book is masterful. The pacing, the scale, the converging events and perspectives, the relentless action… holy shit, it’s simply breathtaking. This is the third time I’ve finished reading The Bonehunters, and yet I have absolutely no doubt that it’ll blow my mind just as much (if not more) when I inevitably read it a fourth time.

Me: *finally takes a breath* Finished!

Prison guard: “Great. Come on now. Back to your cell. From which I recently confiscated a bag of mushrooms, a pair of scissors and a condom. *sigh* Seriously, does everything you think you know about prison come from watching ‘Bad Girls’ a decade ago?”

Me: Maybe. Have you ever read the Malazan Book of the Fallen?