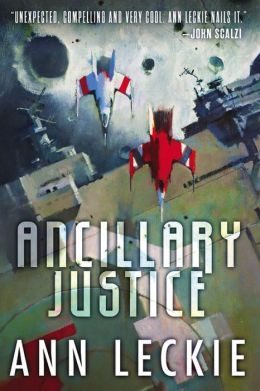 Ancillary Justice won about a million SFF awards in 2014; and while I haven’t read enough of the other contenders’ work to judge whether this one truly deserved all the top spots, I can say that it had me rooting for the unlikely protagonist throughout, and left me wanting more. Ancillary Justice plays with futuristic possibilities of science and technology, and subverts the way we think about concepts such as humanity, social inequality and gender.

In Leckie’s future, ancillaries are a common feature on many ships. Created by fusing the AI of a spaceship with the body of a brain-dead human being, ancillaries are intelligent yet inhuman extensions of a ship’s consciousness. But although they are looked down upon by society and treated merely as pieces of equipment by those they serve, there is much more to some ancillaries than their creators could have anticipated: the protagonist of Ancillary Justice is (as the title suggests) an ancillary who is on a personal mission to exact revenge on the individual who betrayed her captain and destroyed her ship. Breq proves to be far more than simply a slave of the Radch, and is moulded yet not defined by her complicated interactions with those around her. As a protagonist she is unusual, intriguing and more than a little likeable.

I initially found the plot of Ancillary Justice to be slightly confusing, although this probably says more about my own lack of familiarity with the genre and its tropes than it does about the novel itself. However, I would have been prepared to endure even more confusion if it meant avoiding the infrequent yet unwarranted infodumps scattered throughout the beginning of the book. This doesn’t happen often enough to really detract from the story, but it has to be said that there are one or two awkward instances of the old ‘let’s have a detailed conversation about lots of things we as characters clearly already know about,’ where I would have preferred a gradual drip-feed of information instead. My usual diet of traditional fantasy doesn’t generally stretch my brain in these sorts of directions, and I find figuring things out for myself to be fun rather than frustrating.

antagonist, largely due to the somewhat bewildering use of pronouns used by characters with multiple embodiments. Thankfully things became much clearer as the novel progressed, as did the subtle differences between the three different incarnations of the protagonist herself: I came to really appreciate the divergences in her behaviour between the past and the present. In fact, I would love to read Ancillary Justice again in the future having finally got my head around the way things work in the Radch.

A point of interest within Ancillary Justice is the lack of gender in the imperial language of the Radch. As a result the first person narrator Breq refers to everyone as ‘she’, regardless of their actual gender. While this does lead to some confusion – namely in the instances where Breq is speaking in another language and is forced to try and pinpoint others’ gender in order to correctly address them – eventually it becomes such a natural part of the narrative that you stop even trying to figure out whether a character is a man or a woman because, in Leckie’s world, it simply doesn’t matter.

I would probably never have bought this novel if not for a bored evening spent searching for potential new reads using Amazon’s ‘Look Inside’ feature. The beginning of Ancillary Justice – a chance meeting in suspicious circumstances with someone the protagonist has not seen in a thousand years – was sufficiently intriguing to hook me into buying, as was the clearly unconventional nature of the protagonist herself. The rest of the story is engaging and continues in a way that keeps the reader intrigued: it’s well-paced and nicely structured, with chapters that alternate between past and present to gradually reveal more and more about events leading up to the main plot.

Furthermore the reader is made to care about secondary characters, including those not central to the main plot, despite the fact that we’re encountering them through the impassive filter of an ‘inhuman’ AI. And of course there’s the AI herself: she’s the main focus of the novel and I really came to care about her story, enough that I want to immediately grab the next book in the series to see what’s next for Breq. Bring on Ancillary Sword!